The present population of the wider Namoi river basin is approximately 100,000 people (Green et al., 2011). Most inhabitants live along the Namoi River and its tributaries. The largest urban centre in the Namoi river basin, but located outside the subregion, is Tamworth on the Peel River with a population of 36,131 (Australian Bureau of Statistics, 2013). In the subregion itself, the population is approximately 27,000. The largest town is Gunnedah with 9,340 people, followed by Narrabri and Walgett with 6,930 and 6,454 people, respectively. Table 2 shows the main population centres in the river basin according to the 2011 census (Australian Bureau of Statistics, 2013).

Five local government areas (LGAs) are represented within the Namoi river basin, four of which intersect the Namoi subregion (Narrabri, Gunnedah, Liverpool Plains and part of Tamworth). The Namoi Aboriginal Advisory Committee includes communities represented by traditional owners and native-title holders, custodians, elders groups, Aboriginal corporations and the local Aboriginal Land Councils (Namoi CMA, 2013). The Namoi Aboriginal Advisory Committee has a strategic role in providing advice on Aboriginal cultural values to the Namoi Catchment Management Authority. The river basin was inhabited by the Gomeroi people prior to European settlement. Based on figures for 2005 (Hyder Consulting, 2009), of the four local government areas represented in the Namoi subregion, Tamworth LGA had the greatest labour force by number (approximately 20,000), but most of these would be working outside the subregion. The Gunnedah LGA had the smallest labour force of approximately 3700 and the highest unemployment rate (6.3%) in the Namoi river basin. The Narrabri LGA had the lowest unemployment rate (4.2%). The majority of workers in the region described their occupations as management, professional, technicians or trades workers (Hyder Consulting, 2009).

ABARES (2012) land use data for the Namoi subregion (Table 3) shows that livestock grazing on natural and modified pastures accounts for about 40% of land use in the area. Approximately 5% of the subregion is used for irrigated agriculture, primarily cotton, but also other broadacre crops, including wheat, typically on the alluvial floodplains. Dryland cropping accounts for about 23% of land use, forestry for almost 11%, nature conservation 7% and the remaining 14% is largely divided between wetlands, water bodies, minimal use landscapes and residential. In 2010-11, agriculture in the wider Namoi river basin contributed $1,122 million to the regional economy, of which 25% was from cotton production.

Table 3 Land use areas in the Namoi subregion 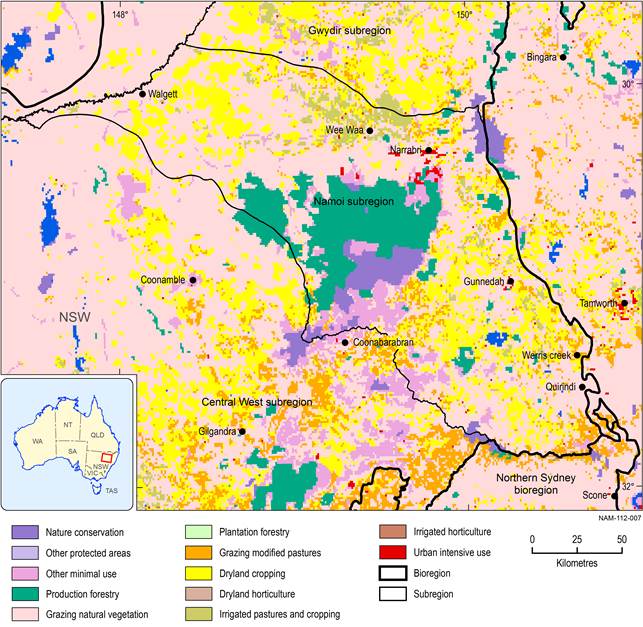 Land use data obtained from the Australian Land Use 50 m May 2006; however the coverage of this data layer was incomplete. Where data were not available the image has been appended with 2001–02 Land Use of Australia, Version 3. This has resulted in minor inconsistencies, such as areas of ‘Grazing modified pastures’ likely being synonymous with ‘grazing natural vegetation’ in some locations in the west of the region.

The land use distribution pattern for the subregion is shown in Figure 8. The distribution of land uses largely reflects soil type and geology and proximity to water. Irrigated crops and pastures are grown in the alluvial areas from the east of the subregion to west of Wee Waa. Beyond the area where irrigation is viable, opportunistic dryland cropping is undertaken when soil moisture is sufficient, and grazing on natural vegetation dominates. Land conservation and forestry is extensive through the central area of the subregion and includes dry sclerophyll forest and the ‘Pilliga Scrub’, which is predominantly Callitris species.

National parks and nature reserves occupy 2065 km2 of the subregion. The parks protect a broad range of native habitat and woodland types including cypress pine, hill red gum, river oak, iron bark and isolated patches of rainforest and semi-arid to subalpine areas and heathlands. The Pilliga Sandstone outcrop has not been cleared for agriculture, largely due to the poor soils and lack of surface water availability. The Pilliga Scrub, incorporating the Pilliga State Forest and the Pilliga Nature Reserve, is the largest remaining native forest on the Australian mainland (NSW Department of Environment, 2013 and Section 1.1.7). It is managed for production forestry in the north and nature conservation in the south. Its connection with adjacent forests makes this an important conservation area as habitat for threatened species such as the Pilliga mouse, eastern pygmy possum, koala, glossy black-cockatoo, swamp wallaby and brush-tailed rock wallaby (Green et al., 2011). In other parts of the region where soils or terrain make agriculture difficult, for example in the mountain ranges to the south and north, the areas are either reserved for nature conservation or classed as ‘minimal use’.

The main rivers in the river basin include the Namoi River (on which Keepit Dam is situated upstream of the subregion) and the Peel River (which is upstream of the subregion and is regulated by Chaffey Dam). No large-scale dams are present in the Namoi subregion although in the lower Namoi, a large number of lagoons occur and two major weirs are in operation to regulate water for domestic, irrigation and stock use (Green et al. 2011). Water is extracted from some creeks and rivers such as the Pian Creek and Gunidgera Creek (off the Namoi River) to supply water for irrigation, and private weirs and off-creek storages also exist (Green et al., 2011). Some parts of the river basin such as the large area of low elevation south-west of Narrabri are semi-arid but occasionally experience significant flooding. Table 4 lists the main water controls in the Namoi river basin. More complete information on water use in the Namoi subregion is provided in Section 1.1.5 .

Water from the Chaffey and Dungowan dams meets the needs of the Tamworth town water supply, stock and domestic users and irrigation from the Peel catchment. An annual allocation system provides water allowances to licence holders in the Peel catchment after essential water has been designated for future requirements, delivery and storage losses. If resources increase, allocations may also increase throughout the ‘water year’ (1 July to 30 June) and when river flow exceeds water user and environmental needs, supplementary access is declared, allowing water to be extracted without annual entitlements being debited. At the end of the water year, unused allocations are forfeited. Tamworth City Council has town water supply entitlements of 16,400 ML/year from Chaffey Dam, 5,600 ML/year from Dungowan Creek Dam and 10 ML/year from the Peel Alluvium, and irrigators have an entitlement of 30,911 ML/year (Green et al., 2011). The groundwater supply from the Peel catchment is also licensed, entitling 51,000 ML/year extraction from alluvial and fractured groundwater sources, which is used for irrigation and stock watering through nearly 5000 bores in the area (Green et al., 2011).

In the Namoi subregion, the Namoi River provides water through regulated flows from Spilt Rock Dam and Keepit Dam and some downstream weirs. The dams are operated as a combined resource but the upper and lower Namoi operate under different allocation methods. The upper Namoi operates on an annual system and requires that full allocation is achieved before additional water is shared with the lower Namoi, whereas the lower Namoi operates on a continuous system where accounts are not reset, allowing users to operate according to their own requirements. When river flows exceed user requirements, additional access to water is provided without debiting users’ accounts (Green et al., 2011).

Groundwater in the Namoi river basin can be accessed from more than 18,000 bores that are licensed to provide 343,000 ML of groundwater per year. Under the New South Wales Water Management Act 2000, a water sharing plan was prepared to establish rules for sharing water between the environment and water users, including water trading and annual water allocations, over a 10-year period. Further details are discussed in Section 1.1.5 .