During the Permian and Triassic Periods, eastern Australia was part of an active Gondwanan convergent plate margin influenced by a west-dipping subduction system. The Lower Permian to Middle Triassic Bowen and Gunnedah basins formed in a back-arc setting, which was initially extensional, but switched to contractional in the Middle Permian. This led to the development of a major west-directed, retroforeland thrust belt in the New England Orogen, with significant static crustal loading and the formation of a major foreland basin phase in the adjacent Bowen and Gunnedah basins to the west (Korsch and Totterdell, 2009b).

The Bowen and Gunnedah basins have been affected by several contractional events, particularly in the Upper Permian and Lower Triassic. These were related to the development of the retroforeland thrust belt in the New England Orogen. The regional structural style changes from the eastern part of the basins, adjacent to the Hunter-Mooki Thrust System, to the western area of the basins which were not physically affected by the retrothrust belt. In the east, new thrusts were hard-linked to the growing thrust wedge further to the east, which propagated westwards and consumed the eastern part of the basin. In the western part of the basin, the transmission of far-field compressional stresses led to reactivation of Lower Permian extensional faults as thrusts, commonly with the formation of fault-propagation anticlines above the fault tip, and the partial inversion of rift-fill sequences. New thrusts and backthrusts also developed (Korsch and Totterdell, 2009b).

There were several periods of non-deposition and contraction in the Bowen and Gunnedah basins, described above, during a sustained period of rapid subsidence and sedimentation during foreland loading. The contractional events were mostly short-lived (each less than a few million years) in an overall period of thrust-loaded subsidence that lasted for 30 to 35 million years. A final contractional event in the Upper Cretaceous was related to the cessation of sedimentation in the Surat Basin (Korsch and Totterdell, 2009a). Fluvial-derived Neogene and Quaternary sediments were deposited on top of the Gunnedah Basin in the central Namoi river basin and directly on top of Surat Basin in the west.

The sedimentary thickness removed by erosion from the Bowen-Gunnedah-Sydney Basin system since deposition increases consistently from north to south, ranging from a few hundred metres in the southern Bowen Basin, to 2 km in the northern Sydney Basin, and up to 4 km further south. Consequently, the Gunnedah Basin has probably had between 0.5 and 2 km of sedimentary rocks removed by erosion (Korsch and Totterdell, 2009a, 2009b).

The average depth/reflectance gradient of 0.25/km is consistent with a high geothermal gradient in the 30–40 degrees / km range (Korsch and Totterdell, 2009b).

A period of extensional volcanism in the Lower Permian produced the Werrie Basalt and Boggabri Volcanics at ~290–280 Ma as a result of back-arc rifting of the initial Gunnedah Basin. These units have a restricted spatial distribution around Narrabri and Gunnedah, although they may locally exceed 1.5 km thick (Figure 17).

Tuffs occur in the Sydney Basin in the Upper Permian at about 260 Ma, which indicates that volcanism was associated with the development of Upper Permian arc tectonism on the New England Orogen. 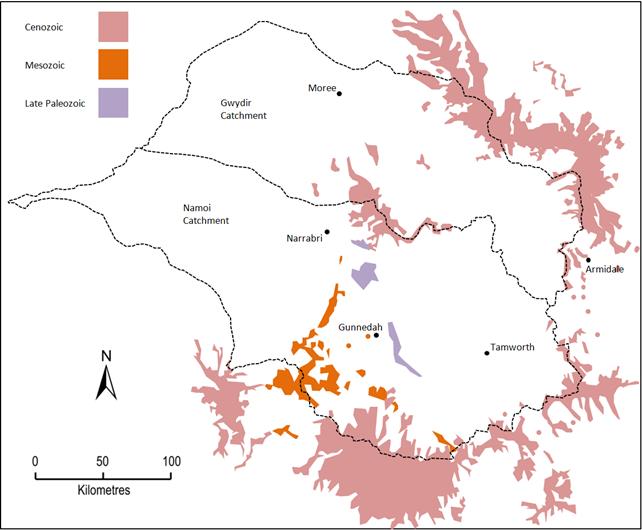 It should be noted that the Cenozoic volcanic rocks appear to have a significant influence on defining river basin boundaries.

The Garrawilla Volcanics form the basal unit of the Surat Basin and are variously dated between 215 and 177 Ma (Stewart and Alder, 1995). The volcanic rocks comprise dolerite, basalt, trachyte, tuffs and breccias. Alkaline intrusive plugs are associated with these volcanic rocks (Dulhunty, 1967).

Cenozoic volcanic rocks, sills and plugs are extensive throughout eastern New South Wales and range in age from 70 to 5 Ma. Several large outcrop and subcrop areas of extrusive rock occur near the Namoi area, including the Barrington, Walcha, Nandewar, Warrumbungle and Liverpool Range volcanos. The Liverpool and Nandewar ranges are the nearest to and thus most significant in terms of impact for the main coal bearing sections of the Gunnedah Basin. These are dated at about 40 Ma and 18 Ma, respectively (Wellman and McDougall, 1974).

Gurba and Weber (2001) reported that the Gunnedah Basin coal sequences are intersected by both Triassic and Cenozoic intrusive rocks. From map evidence and published reports (Golder Associates, 2010) the intrusives are commonly associated with faulting and are contemporaneous with the Lower Jurassic Garrawilla Volcanics (200 to 180 Ma).