The wider Namoi catchment has been divided into 12 groundwater management units (GMUs), as defined by the NSW state government in accordance with the Murray–Darling Basin Plan for regulation and management purposes. Eight of the 12 GMUs occur in the Namoi subregion (Figure 31). 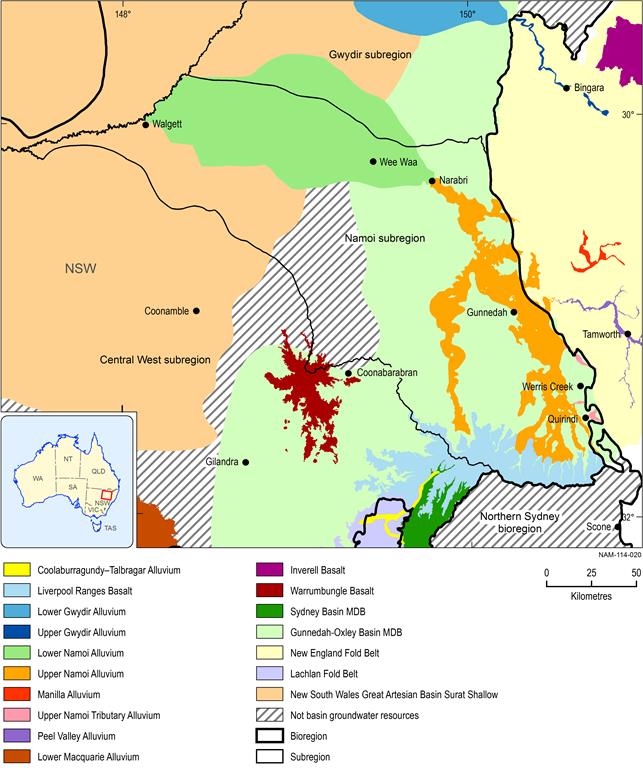 The units are based on geology and groundwater and surface water catchment divides (SWS, 2011) and are categorised as alluvial, fractured rock or porous rock groundwater management areas, as described in Table 8.

For the purposes of water management in NSW, the Upper and Lower Namoi Alluvium GMUs are referred to as the Upper and Lower Namoi Groundwater Sources, respectively. These groundwater sources include all water in the unconsolidated alluvium sediments. Both of these are managed under a water sharing plan that commenced in 2006 (Green et al., 2011). The Water Sharing Plans are legal documents and set out the recharge, environmental water provisions, extraction requirements, share components and extraction limits for the groundwater sources (Green et al., 2011).

The Lower Namoi Groundwater Source extends approximately 160 km west from Narrabri and covers an area of approximately 7630 km2. The alluvium is up to 120 m deep and some bores are very high yielding (Green et al., 2011). The water sharing plan for the Lower Namoi estimates average annual recharge of 86,000 ML/year and requires the annual extraction limit to be reduced from approximately 105,000 ML in 2006–07 to 86,000 ML in 2015. This extraction limit includes 21,010 ML of supplementary water Access Licences. After the 2014-2015 water year there will be no groundwater available under Supplementary Water Access Licenses (NSW Department of Infrastructure, Planning and Natural Resources 2006; NSW Office of Water 2013).

The Upper Namoi Groundwater Source extends about 175 km south from Narrabri and includes the unconsolidated sediments associated with the Namoi River and its tributaries (including Mooki River and Coxs Creek) upstream of Narrabri. It covers an area of 3800 km2, and is divided into 12 separate groundwater zones based on hydrogeological features.

The Upper Namoi water sharing plan reduces entitlement from 301,000 to 122,000 ML by the 2016–2017 water year (July–June). There are approximately 1100 production bores in the Upper Namoi groundwater source, all of which are metered and have usage recorded at regular intervals (two to six readings per year) (Barrett, 2012).The Upper Namoi has a large volume of carryover held in accounts, hence the volume of water available for use exceeds annual plan extraction limits.

The remaining GMUs not included in the above plans are covered by macro water sharing plans based on aquifer type (e.g. alluvial, fractured rock or porous rock GMUs). These plans apply where there is less intensive water use.