Around 8% of the water extracted for towns, industry and agriculture in the Gippsland Basin bioregion is sourced from groundwater (DSE, 2011). The development of Gippsland’s groundwater resources commenced in the early 1900s, with the development of the Macalister, Mitchell River and Yarram irrigation districts. Large-scale aquifer depressurisation for coal mining began in the 1960s. Groundwater from shallow and deep aquifers either supplies or supplements the water supply to a number of towns across Gippsland including Sale, Boisdale, Briagolong, Wurruk and Yarragon. Sale’s town water supply has been solely sourced from groundwater since 1970 (Schaeffer, 2008). Groundwater has also become increasingly investigated as a contingency water supply for other towns throughout the Gippsland Basin (e.g. Thorpdale) (Gippsland Water, 2012).

There are about 164 GL of licensed groundwater entitlements in Gippsland. In any managed groundwater area, the licensed entitlement is capped at the permissible consumptive volume (PCV). The total PCV for the Gippsland Basin bioregion is about 176 GL (see Table 16).

The Yallourn, Morwell and Loy Yang open-cut coal mines hold licences to pump about 45 GL/year of groundwater to drain and stabilise the mines. Average annual groundwater extraction at the mines is 30 GL/year (DSE, 2011). The total extracted groundwater volume for the July 2012 to June 2013 period was 28.5 GL (GHD, 2013). This water is typically extracted from the middle aquifer system and the lower aquifer system.

Offshore oil and gas production extracts additional water from the Latrobe Group aquifer (the ‘lower’ groundwater system). The effective volume of oil, gas and groundwater extracted offshore is estimated at 100 GL/year since the early 1990s (DSE, 2011). 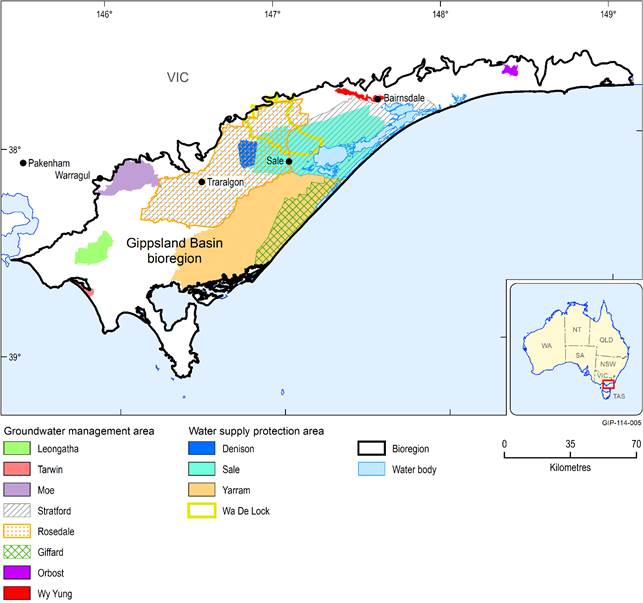