In this section, groundwater quality is reported in terms of salinity (mg/L total dissolved solids (TDS)), drawing on readily available information. The Victorian Government (Department of Environment and Primary Industries) has produced groundwater salinity maps for each of the aquifer layers within the VAF (e.g. Sinclair Knight Merz, 2014). These salinity maps reflect all salinity data available through time, rather than a time slice of salinity distribution (Sinclair Knight Merz, 2014). The most recent update of these maps is presented in Section 1.1. 4.2.1 for each of the aquifer systems of the Gippsland Basin and the Moe Swamp and Tarwin sub-basins.

There is limited published research about the hydrogeochemistry of the Gippsland Basin for understanding groundwater flow patterns and inter-aquifer mixing. A recent study by Hofmann and Cartwright (2013) is one of the most comprehensive studies investigating the use of hydrogeochemistry for understanding aquifer systems in the Gippsland Basin. This study focused on the groundwater systems of the Latrobe Valley and Lake Wellington depressions. The major findings of the study were: major ion chemistry of groundwater in all aquifers is similar across the basin, with no systematic changes along flow paths; localised preferential flow paths, as well as regional hydraulic gradients, influence the chemistry of the groundwater; and relatively indistinct groundwater chemistry between the different aquifers of the Gippsland Basin within the Latrobe Valley and Lake Wellington depressions indicates that inter-aquifer mixing and leakage may be significant. Hofmann and Cartwright (2013) noted that the extent to which groundwater extraction has influenced the degree of inter-aquifer mixing is not known as there is no historical geochemical data available to undertake such an investigation. Groundwater flow systems will be discussed in further detail in Section 1.1 .4.3.

Figure 23 presents maps of groundwater salinity in the Gippsland Basin. 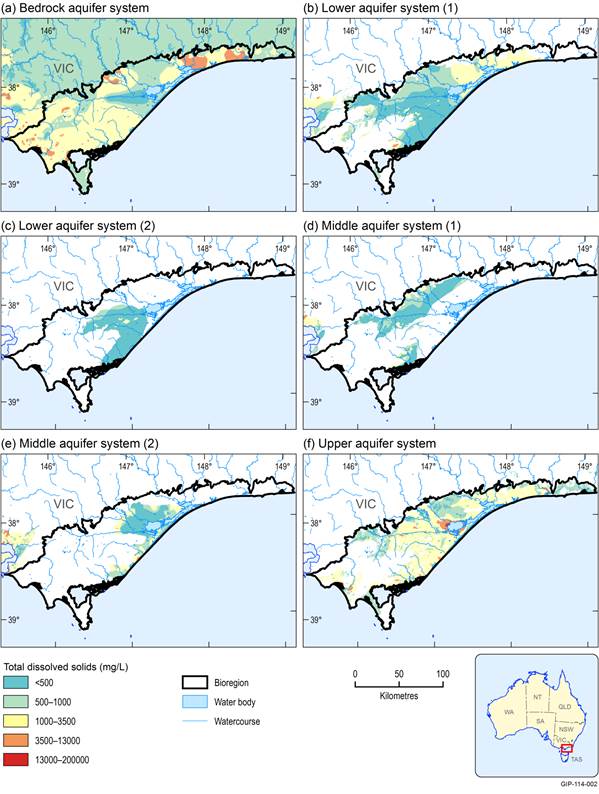 The uppermost part of the middle aquifer system (Figure 23 (d)), the Boisdale Formation (Wurruk Sand Member) is an important aquifer within the Gippsland Basin due to its high pumping yields and generally low salinity. The groundwater salinity is generally less than 500 mg/L TDS, however higher salinity groundwater (500 to 3500 mg/L TDS) is evident in the region between Rosedale and Maffra in the north; in the eastern part of the aquifer, towards Lakes Entrance; and in the south-west and south along the coast.

Groundwater of the Balook Formation, Morwell Formation, Yarragon Formation and Alberton Coal Measures aquifers is of good quality, generally having salinity of less than 500 to 1000 mg/L TDS. Higher salinities are evident along the bedrock boundaries in the north (up to 3500 mg/L TDS), along the crest of the Baragwanath Anticline (up to 13,000 mg/L TDS) and north and south of the Strzelecki Range (Figure 23 (e)). A similar pattern of elevated salinities in the lower aquifer is also evident in these areas.

Low salinity groundwater (<1000 mg/L) is found in the aquifers of the recent Quaternary and Sale Group sediments in the Lake Wellington catchment and Mitchell River valley as well as around the regions of Moe and Orbost, the South Gippsland Coast and in the upper valleys of the Macalister, Mitchell, Tambo and Snowy rivers (Southern Rural Water, 2012). Groundwater within the surficial aquifers across the remainder of the Gippsland Basin bioregion is generally of poorer quality (>1000 mg/L). High salinity groundwater (mainly within the class 3500 to 13,000 mg/L TDS) exists in the vicinity of Lake Wellington and within the Macalister Irrigation District, as well as some areas along the coast.

Hofmann and Cartwright (2013) interpreted hydrogeochemical data to indicate that higher salinity groundwater in younger units in the Gippsland Basin is likely the result of significant evapo-concentration of shallow groundwater.

About 110 km2 of Gippsland’s farmland is affected by irrigation-induced salinity and about 130 km2 is affected by dryland salinity (DSE, 2011). Salinisation in Gippsland has been caused by land clearing and inefficient irrigation which leads to an elevated watertable. Salinity has been an issue for the Macalister Irrigation District as well as low-lying areas with naturally high watertables near the coast and the Gippsland Lakes. Within the Macalister Irrigation District, salinity is actively managed by pumping from public and private groundwater bores and improving surface drainage to lower the watertable (DSE, 2011). A network of 260 observation bores across the Lake Wellington catchment is managed by the West Gippsland Catchment Management Authority. Quarterly groundwater level monitoring of selected bores within this network is undertaken to ensure that salinity interception pumps are managed optimally. A depth to watertable map is produced annually from this data.