The geomorphology of the Gloucester subregion has been described in detail elsewhere (companion product 1.1 (McVicar et al., 2014); companion product 2.3 (Dawes et al., 2018) for the Gloucester subregion), and only a brief summary is presented here as context (Figure 48). The Quaternary alluvial aquifers are developed in proximity to the rivers. Soils in these alluvial deposits are dominated by Tenosols and are composed of clay layers and highly permeable sediments with high hydraulic conductivities (up to 500 m/day). The thickness of the alluvia varies from 9 to 15 m and the watertable is shallow and responsive to rainfall and flood events close to the river.

The Permian fractured rock and weathered zone is up to 150 m thick. It underlies the alluvial system and extends to the edges of the subregion. These shallow-rock hydrogeological units are composed of interbedded sandstone, silt and claystone. Generally, hydraulic conductivities of these aquifers are low with a sluggish response to rainfall. However, these hydraulic conductivities are highly variable as a result of fracturing and fault zones within the formation. Soils of the fractured rock and weathered zone tend to be dominated by Kurosols. Typically, these soils have a sharp, abrupt boundary between the upper coarser-textured ‘A horizon’ and the finer-textured ‘B horizon’, which may provide a pathway for subsurface lateral flows of water.

The outcropping Alum Mountain Volcanics formations are generally considered to be impermeable but localised fractures may provide pathways for localised groundwater flow paths (companion product 1.1 for the Gloucester subregion (McVicar et al., 2014)). These may be expressed as springs along the margins of the basin, driven by localised circulation of meteoric water. 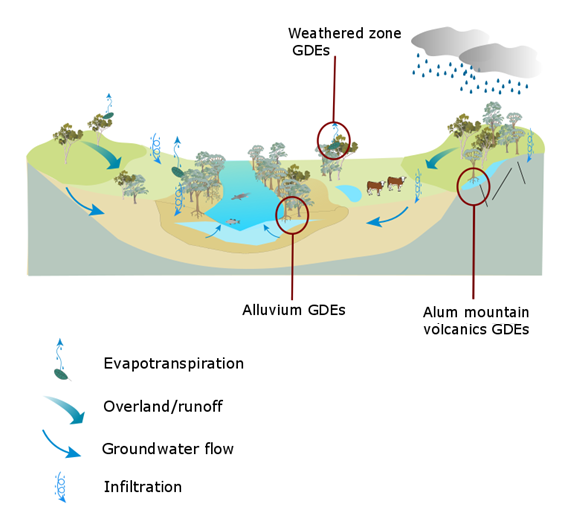 The water requirements of GDEs are poorly understood and there is large uncertainty as to the frequency, timing and duration of groundwater use within the Gloucester subregion. In general, transpiration of groundwater is expected to decline as the depth to groundwater increases, but there is very limited evidence to support this assumption within Australia. O’Grady et al. (2010) reviewed estimates of groundwater discharge in Australia and concluded that there is considerable variation in the relationship between transpiration of groundwater and depth to groundwater. Factors such as the rooting depth of a particular species (which is usually not known), hydroclimatic environment and groundwater salinity all impact on groundwater use by vegetation. Zolfaghar et al. (2014) examined the structure and productivity of eucalypt forest across a depth-to-watertable gradient in the upper Nepean catchment in NSW. They found that where groundwater was shallow, vegetation had significantly higher biomass and productivity than sites where groundwater was deeper than approximately 10 m. The relationships between depth to groundwater and the structural and functional attributes of the vegetation communities were highly non-linear, with steep declines in leaf area index and biomass over a range of 5 to 10 m depth to groundwater. However, it is important to note that the study was largely correlative in nature and did not quantify the groundwater requirements of the vegetation. Specific studies of GDEs within the Gloucester subregion are limited. Existing mapping of GDEs is based on a multiple-lines-of-evidence approach that incorporated existing vegetation mapping, modelled groundwater levels and remote sensing (Kuginis et al., 2012). Modelled depths to groundwater (Summerell and Mitchell, 2011) for the subregion are generally shallow (within 16 m of the ground surface). However, there is likely to be uncertainty in the mapping and this is indicated by relatively shallow groundwater modelled within the bordering Alum Mountain Volcanics.

Of the five GDE landscape classes that were identified as likely to be groundwater dependent, four were present in the zone of potential hydrological change: ‘Forested wetlands’, ‘Wet sclerophyll forests’, ‘Rainforests’ and ‘Dry sclerophyll forests’. GDEs occur within each of the three hydrogeological units described previously but they are predominantly associated with the weathered/fractured rock zone and alluvial aquifers (Table 21). Few GDEs are present above the Alum Mountain Volcanics.

The wet sclerophyll forests of NSW occur on moderately fertile soils in high rainfall areas, and are characterised by a tall, open, sclerophyllous tree canopy and a luxuriant understorey of soft-leaved, mesophyllous, shrubs, ferns and herbs. Many understorey plants are rainforest species or have close rainforest relatives. Rainforests may be embedded within a matrix of wet sclerophyll forest and the two often blend together as intermediate forms. More than 30% crown cover of emergent, non-rainforest species (including eucalypts, brushbox and turpentine) results in a classification of wet sclerophyll forest rather than rainforest (DECC, 2007). As discussed in Section 2.7.2 of companion product 2.7 for the Gloucester subregion (Hosack et al., 2018b), a single conceptual model was developed for both the ‘Wet sclerophyll forests’ and ‘Rainforests’ landscape classes in the Gloucester subregion. The main vegetation communities are described in Table 22.

Based on the modelling of the 95th percentile presented in Table 23 and Table 24, it was concluded that approximately an additional 1.1 km2 of GDEs would be subjected to a groundwater drawdown of greater than 0.2 m but less than 2 m, and that most of the impact would be in the ‘Forested wetlands’ landscape class. As noted in Section 3.4.4.1, the water requirements of GDEs are poorly understood and there is large uncertainty as to the frequency, timing and duration of groundwater use within the Gloucester subregion. In general, transpiration of groundwater is expected to decline as the depth to groundwater increases, but the relationships between depth to groundwater and the structural and functional attributes of the vegetation communities are highly non-linear, with steep declines in leaf area index and biomass over a range of 5 to 10 m depth to groundwater.

The area potentially exposed to ≥0.2, ≥2 and ≥5 m baseline drawdown is shown for the 5th, 50th and 95th percentiles. Baseline drawdown is the maximum difference in drawdown (dmax) under the baseline relative to no coal resource development. Areas within mine pit exclusion zones are excluded from further analysis.

Due to rounding, some totals may not correspond with the sum of the separate numbers.

The area potentially exposed to ≥0.2, ≥2 and ≥5 m baseline drawdown is shown for the 5th, 50th and 95th percentiles. Additional drawdown is the maximum difference in drawdown (dmax) due to additional coal resource development relative to the baseline. Areas within mine pit exclusion zones are excluded from further analysis.

The models (summarised in Table 25) predicted decreases in all vegetation-related variables, including overstorey and understorey (ground layer) cover, and recruitment. Forest habitats and nectar production were also expected to be negatively impacted, while fragmentation was predicted to increase. This was predicted to have negative impacts on populations of arboreal mammals, including koalas but not flying foxes, as well as nocturnal raptors and aggressive native honeyeaters. The impact of hydrological changes on flying foxes, regent honeyeaters, swift parrots and diurnal raptors was uncertain. Although the conclusions from this modelling are qualitative, and therefore highly uncertain, it is reasonable to assume that any ecosystem impacts will be greatest where the groundwater drawdown is greatest in the immediate vicinity of resource development. The impacts on assets associated with these landscape classes are further assessed in Section 3.5.2.

Predictions with a low probability (less than 0.80) of sign determinacy are denoted by a question mark. Zero denotes completely determined predictions of no change. na = not applicable