The conceptual model of causal pathways describes the logical chain of events ‒ either planned or unplanned ‒ that link coal resource development to potential impacts on water and water-dependent assets. The causal pathways provide the logical and transparent foundation for the impact and risk analysis.

A systematic hazard analysis, using the Impact Modes and Effects Analysis method (described in companion submethodology M11 (as listed in Table 1) for hazard analysis (Ford et al., 2016)), was undertaken for the Gloucester subregion to identify the activities that occur as part of coal resource development that might result in a change in the quality or quantity of surface water or groundwater. Hazards were prioritised according to the likelihood, severity and detectability of potential impacts (Dataset 1). It is important to ensure that all hazards are addressed for the impact and risk analysis to meet the necessary quality criteria. This does not mean that all causal pathways need to be assessed in the same way, only that they are all addressed in some way. 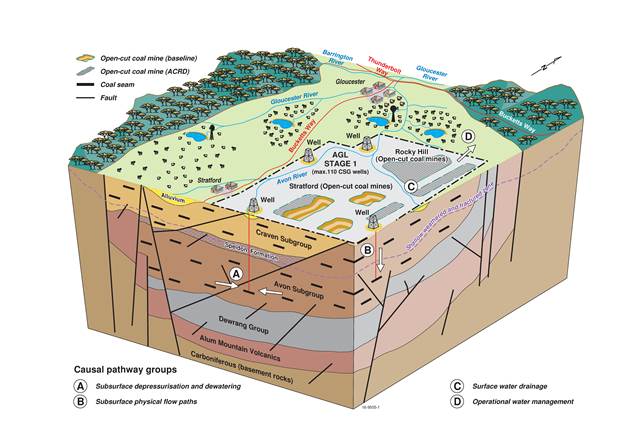 This schematic diagram is not drawn to scale. CSG = coal seam gas

The effects of some hazards were not modelled. Some cannot be modelled due to scale or complexity and were addressed qualitatively using the current conceptual understanding and knowledge base. Changes in water quality due to coal resource development activities were considered only through potential effects on stream salinity (Section 3.3.4). Some identified hazards were deemed to be local in scale and addressed by existing site-based management, whereas some were considered knowledge gaps (e.g. because the means of disposal for co-produced water extracted during CSG production is unknown). Others were considered of such low likelihood and/or consequence for broader cumulative impacts at the regional scale that they were not included.

While the causal pathway groups are generic, the physical characteristics of a subregion, such as its geological, geophysical and topographic architecture, and related surface water and groundwater networks, will influence the hydrological connectivity across the subregion. The Assessment team’s conceptual understanding of the dominant geological and topographic influences on surface water and groundwater connectivity in the Gloucester subregion are described in companion product 2.3 (Dawes et al., 2018).

Each causal pathway is listed in a chain of logic from the hazard and associated hydrological effects to system components that may contain assets or ecosystems that may be subject to potential hydrological changes.