The Galilee subregion covers about 248,000 km2 of central Queensland (Figure 3) and, for BA purposes, forms part of the larger Lake Eyre Basin bioregion. The Galilee subregion is defined by the mapped extent of the geological Galilee Basin, a large coal-bearing basin containing rocks of Late Carboniferous to mid Triassic age (i.e. deposited from about 323 to 238 million years ago). The basin’s stratigraphic units comprise a mixed assemblage of clastic sedimentary rocks with thick successions of predominantly sandstone, mudstone and coal. The maximum thickness of the Galilee Basin strata is about 2800 m, with the thickest sequences occurring in structurally controlled depositional centres such as the Lovelle Depression and Koburra Trough (Figure 3).

Most of the Galilee Basin is now buried below younger sedimentary rocks associated either with the Jurassic to Cretaceous Eromanga Basin, the Cenozoic Lake Eyre Basin, or alluvial sediments deposited in modern rivers and lakes. The depth to the uppermost coal-bearing sequences in the Galilee Basin is commonly 500 to 1500 m (below surface) in most of the western, central and southern basin. These depths largely preclude such areas of the subregion from any future coal mining activity (although they may be prospective for future coal seam gas (CSG) development). However, near the basin’s eastern margin an approximately 600 km long and up to 80 km wide corridor of older rocks of the Galilee Basin occurs either at or near surface. Although commercial coal extraction has not yet taken place (as of mid-2018), it is within this part of the Galilee subregion where most attention has focused on the potential for mining the basin’s world-class resources of high volatile, low rank (thermal) black coal. The CRDP for the Galilee subregion, which was used to focus this BA, is described in Section 3.1.2. 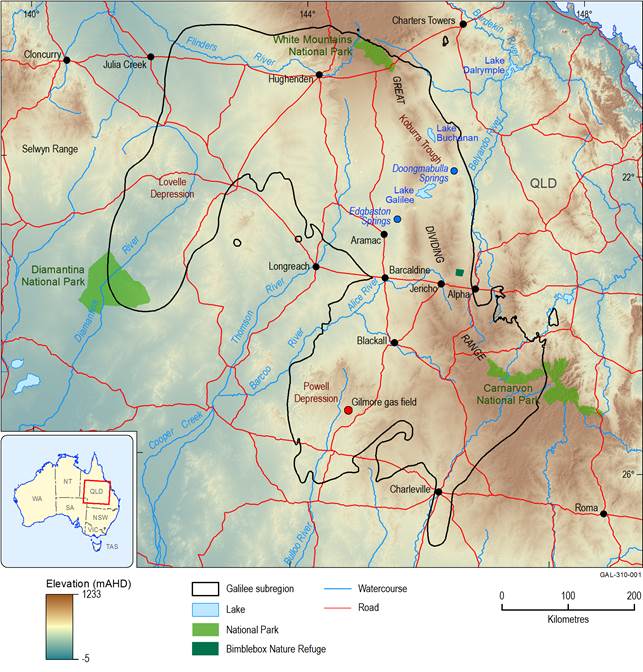 The background data shown on this map depict variations in topography as defined using a smoothed digital elevation model (DEM) which has a resolution of 1 arc second. The topography is shown in metres relative to the Australian Height Datum (mAHD). The most elevated parts of the subregion are variously shaded brown, and these correspond with the area of the Great Dividing Range. Not all national parks in the subregion are depicted. 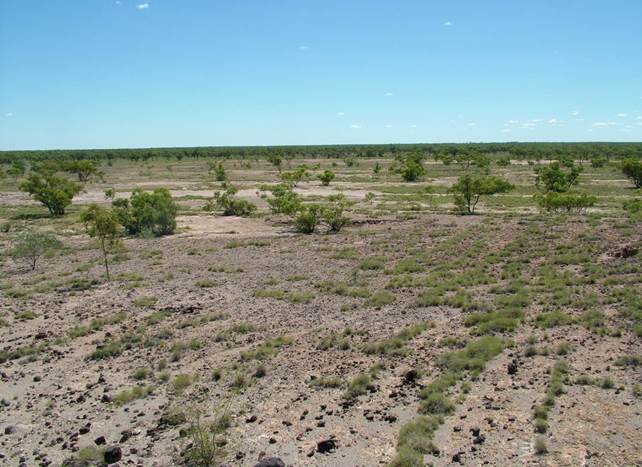 Landscapes in the western and central parts of the Galilee subregion consist mainly of flat-lying to gently undulating terrain, typically covered by dry grassy plains of Mitchell grass (Astrebla) and various species of tussocks. Further eastwards, these plains give way to the more elevated uplands of the Great Dividing Range, the crest of which transects the subregion near its eastern boundary. The upland areas have sparse to moderate cover of remnant native vegetation, typically eucalypt woodland with grassy understorey. Topographic elevation across the Galilee subregion varies from lows of about 150 m (relative to the Australian Height Datum, mAHD), in the north-west near the floodplains of the Diamantina River, up to nearly 1000 mAHD in the Carnarvon National Park in the south-east. Typical landscapes of the Galilee subregion are shown in Figure 4 and Figure 5.

Most of the subregion has a semi-arid to arid climate, with variable annual rainfall commonly 300 to 600 mm/year, and very high rates of evapotranspiration (2200 to 2900 mm/year). Rainfall patterns typically diminish westwards across the subregion (i.e. inland away from the coastline), with the highest annual rainfall totals recorded in the more elevated terrain around the Great Dividing Range in the north-east and south-east of the subregion. The winter months are typically the coldest and driest. In contrast, summer is when most rainfall occurs, and daytime summer temperatures commonly exceed 35° C, with overnight minima above 20° C. 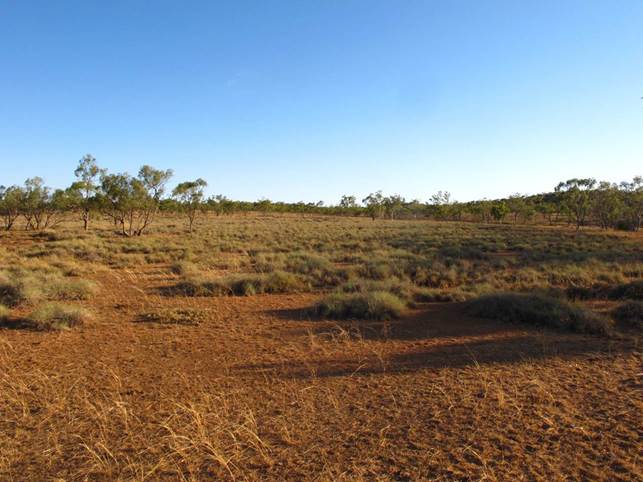 The Galilee subregion includes the headwaters of six major surface water catchments (Figure 6). Nearly two-thirds of the subregion’s surface water drainages flow inland towards Lake Eyre, either as part of the Cooper Creek – Bulloo river basin or the Diamantina river basin. The main streams within these river basins include the Diamantina, Thomson, Alice and Barcoo rivers, which mostly flow out of the subregion towards the south-west. The other main river basins in the Galilee subregion are the Flinders (which covers about 14% of the subregion’s area), Warrego (12%), Burdekin (8%) and Fitzroy (3%). Streamflow discharge and duration vary significantly within and between most of these river basins. Many streams in the subregion are ephemeral, with a strong seasonal (summer) influence on times of peak flow. In addition to the main river systems, there are two prominent semi-saline playa lakes in the eastern highlands of the Galilee subregion, lakes Buchanan (117 km2) and Galilee (257 km2). These lakes occur within closed, internally draining catchments. They are listed formally in A directory of important wetlands in Australia (Environment Australia, 2001) and are critical habitat sites for many waterbirds, including some species listed under the EPBC Act.

Groundwater systems are an important source of water for ecological, economic and sociocultural water-dependent assets within the Galilee subregion. This reflects the semi-arid to arid climate, the sporadic and generally low annual rainfall, and the intermittent flow within most surface water systems. The main groundwater systems across most of the subregion are the aquifers of the Great Artesian Basin (GAB), primarily hosted within the Eromanga Basin and thus overlying (i.e. not in direct contact with) the Permian rock layers targeted for coal mine development. These groundwater resources include the renowned GAB aquifers of the Cadna-owie Formation, the Hooray Sandstone and the Hutton Sandstone (Ransley et al., 2015). In areas of the Galilee subregion where the Eromanga Basin does not occur, several aquifers of the Galilee Basin are locally important resources for groundwater supply, including the Triassic Clematis Group and Warang Sandstone. In some areas, local groundwater flow systems are also hosted in Cenozoic alluvial sediments, including paleovalleys (i.e. ancient rivers), although these aquifers are typically much thinner and more areally restricted than the deeper regional groundwater flow systems of the Eromanga and Galilee basins.

The Galilee subregion is ecologically diverse, supporting a large number of ecosystems. This variety reflects the subregion’s large surface area, variable geology and soil types, and climatic (e.g. temperature and rainfall) gradients with strong seasonal influences. There are characteristic terrestrial and aquatic species and communities across the subregion, including examples that are recognised as being of both national and regional significance. For example, there are seven ecological communities listed under the EPBC Act, including ‘The community of native species dependent on natural discharge of groundwater from the Great Artesian Basin’. A detailed summary of the subregion’s ecological assets and its main ecosystems is presented, respectively, in companion product 1.3 (Sparrow et al., 2015) and companion product 2.3 (Evans et al., 2018) for the Galilee subregion.

Groundwater-fed springs are important ecological systems in the Galilee subregion. Numerous spring complexes are known, including several that are nationally important and protected by various Queensland and Australian Government legislation. Most of these springs are sourced from discharge of regional groundwater systems of the GAB, such as the Barcaldine springs supergroup (Fensham et al., 2016), which has over 50 spring complexes scattered across a north-trending zone to the east of Barcaldine, and west and south-west of the playa lakes, Buchanan and Galilee. There are also several spring systems within the central-eastern part of the Galilee subregion, including the EPBC Act-listed Doongmabulla Springs complex on the Carmichael River, and the nearby Mellaluka Springs complex. There is a high level of species endemism in many of the spring complexes within the Galilee subregion, with biota adapted to relatively narrow environmental conditions (i.e. they have low resilience and resistance to environmental change).

The Galilee subregion is sparsely populated, and less than 20,000 people are estimated to reside across its vast expanse. Most residents (about 75%) live in small- to medium-size country towns, with Charleville (population about 3500) the largest populated place, situated near the southern boundary of the subregion. Other regional population centres in the Galilee subregion include Barcaldine and Blackall in the central area, and Hughenden in the north. Several small towns occur near to the main proposed area of coal mining development in the central-eastern Galilee, such as Alpha and Jericho (Figure 3).

According to the Australian Land Use and Management Classification scheme (ABARES, 2016), over 90% of the subregion is used for dryland farming practices, predominantly livestock (sheep and cattle) grazing on natural vegetation. Many large pastoral holdings exist within the Galilee subregion, on both freehold and leasehold lands. Access to reliable and good quality groundwater resources is particularly important to sustain the region’s pastoral activities, given the intermittent flow of most surface water systems and the generally low annual rainfall. Minor land uses include nature conservation (e.g. the Diamantina, White Mountains and Carnarvon national parks, and the Bimblebox Nature Refuge) and some production forestry in the south-east. There are currently no commercially producing coal mines or CSG fields within the subregion, although there is one conventional gas field in production. This is the Gilmore Gas Field, which extracts gas from a conventional hydrocarbon reservoir within the Adavale Basin, which is geologically older and stratigraphically underlies the Galilee Basin (and thus is not within the scope of this BA).