The impact and risk analysis for the Galilee subregion (Component 3 and Component 4) followed the overarching logic described in companion submethodology M10 (as listed in Table 1) for analysing impacts and risks (Henderson et al., 2018), and is summarised diagrammatically in Figure 7. It built on, and was only possible because of, the contextual information (Component 1) and knowledge from the conceptual models of causal pathways, numerical groundwater and surface water modelling, and associated data analysis (Component 2). These components are described in detail in the preceding products for the Galilee subregion, and are referenced extensively throughout this document. The impact and risk analysis represents the culmination of the Assessment team’s research to improve the knowledge base around the coal resource development pathway (CRDP) in the Galilee subregion, and to understand how water resources and water-dependent assets may be affected by hydrological changes caused by the proposed developments.

The impact analysis presented here quantified the magnitude and extent of the potential hydrological and ecosystem changes due to the additional coal resource development in the Galilee subregion. As specified in the BA methodology (Barrett et al., 2012), this included: 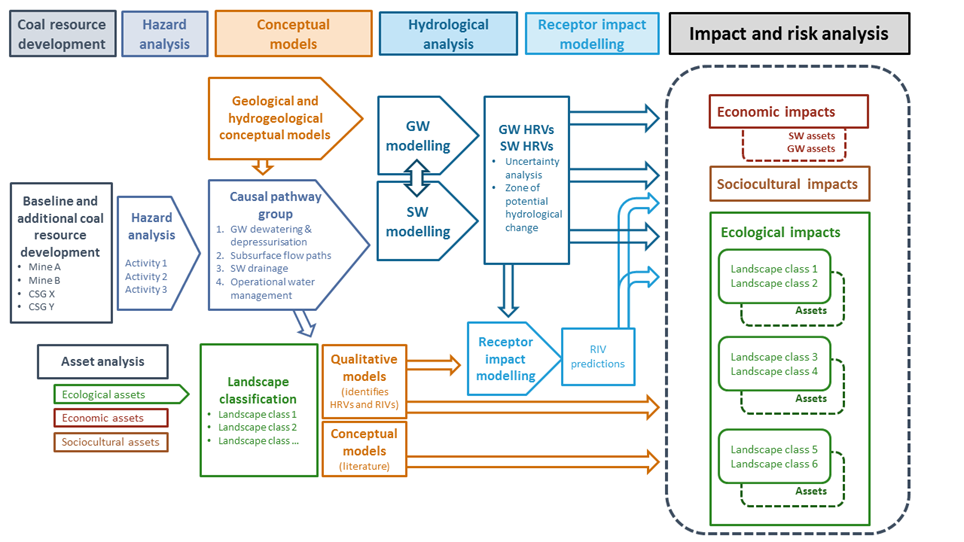 CSG = coal seam gas, GW = groundwater, HRV = hydrological response variable, RIV = receptor impact variable, SW = surface water. Refer to Table 1 and Figure 2 for an overview of the various technical products and submethodologies that relate to the main components of the bioregional assessment depicted in this diagram.

The risk analysis is related, but considers not only the magnitude and extent of the potential impact but also the likelihood of that impact. This is commonly framed as ‘consequence multiplied by the likelihood’. The quantification of the likelihood was underpinned by an uncertainty analysis that allowed probabilistic statements about the occurrence of particular events or impacts, such as the magnitude, extent and timing of groundwater drawdown in an aquifer. Within BAs, the uncertainty analysis stochastically propagated uncertainties in the most important hydrological parameters through the models to produce distributions of potential surface water and groundwater changes. These in turn were input to receptor impact models (see companion product 2.7 for the Galilee subregion (Ickowicz et al., 2018)) to produce distributions of receptor impact variables that were chosen as indicators of potential ecosystem impacts.

The BA for the Galilee subregion has identified risks through a comprehensive hazard analysis and analysed those risks by estimating the magnitude and likelihood of specific impacts. The risk assessment, risk evaluation and risk treatment that occur as part of broader risk management (see, for example, ISO 31000:2009 Risk Management Standards) are beyond the scope of BAs because they require careful consideration of a number of non‐scientific matters and value judgments; these are roles of proponents and government regulators in the first instance.

This product first describes the hydrological changes to groundwater and surface water systems in the Galilee subregion, as modelled to occur due to the coal resource development pathway (Section 3.3). Following this, the product explains the potential impacts of those hydrological changes on the main water-dependent ecosystems (as represented through landscape classes, Section 3.4) and water-dependent assets (Section 3.5), which contain various ecological, economic and sociocultural values.

BAs present the likelihood of certain impacts occurring, for example, the percent chance of exceeding 0.2 m of groundwater drawdown in a particular aquifer at a particular location. The underpinning data and information are available at www.bioregionalassessments.gov.au for others to use more broadly in their own targeted risk assessments. Future users of this BA can choose thresholds of impact that may threaten the specific values they are trying to protect and calculate the corresponding likelihood of occurrence. More details about hydrological changes and potential impacts in the Galilee subregion are available via the BA Explorer online mapping interface at www.bioregionalassessments.gov.au/explorer/GAL.