This section describes the impacts on and risks to landscape classes that may be impacted by hydrological changes resulting from additional coal resource development in the Galilee subregion. The section focuses on those landscape classes that may experience potential ecological impacts. Impacts on economic and sociocultural assets are addressed separately (see Section 3.5).

The Galilee assessment extent was classified into 31 landscape classes that were aggregated into 11 landscape groups based on their likely response to hydrological change (Figure 37). For example, five landscape groups are identical, with the exception of whether they support remnant or non-remnant vegetation. Water source identifies whether landscapes are groundwater-dependent ecosystems (GDEs), disconnected from the groundwater system or reliant only on incident rainfall and localised runoff (companion product 2.3 for the Galilee subregion (Evans et al., 2018b)).

Most ecosystems (73%) in the zone of potential hydrological change are classified as either ‘Dryland’ (8134 km2) or ‘Floodplain, non-wetland’ (2098 km2) landscape groups (Figure 38). These groups depend on incident rainfall and localised runoff for their water requirements and do not depend on access to groundwater or streams. Consequently, impacts and risks for these two landscape groups are not further assessed for the bioregional assessment (BA) for the Galilee subregion.

As noted in Section 3.3.1.1, about 6% (approximately 800 km2) of the zone of potential hydrological change occurs beyond the eastern boundary of the Galilee assessment extent (Figure 38). Landscape classes were only developed in BAs within the area of the assessment extent, and this process was undertaken prior to defining the extent of the zone of potential hydrological change. Consequently, the spatial coverage of landscape classes and groups for the BA of the Galilee subregion does not include the 6% of the zone that occurs beyond the margins of the assessment extent.

Visual inspection of the mapped distribution of landscape groups near the eastern boundary of the assessment extent (Figure 38) suggests that most of this area contains ecosystems of the 'Dryland' and 'Floodplain, non-wetland' landscape groups (which is similar to the overall proportion of landscape groups that are mapped in the zone). However, small sections of 'Streams, GDE' ecosystems associated with the upper Belyando River and parts of Tomahawk and North creeks do intersect with this area of unmapped landscape groups in the zone. There may also be some small areas of 'Floodplain, terrestrial GDE' that occur sporadically throughout this area, although there are no known springs in the unmapped parts of the zone.

The lack of landscape group mapping at the eastern-most margins of the zone is a recognised limitation of this BA and may mean that some specific results reported in this Section are slightly underestimated or overestimated. Despite this limitation, the Assessment team consider it highly unlikely to substantially alter the main findings of the landscape group analysis presented here, given the majority of the zone is adequately mapped, and the unmapped 6% appears likely to contain mostly 'Dryland' or 'Floodplain, non-wetland' ecosystems.

Receptor impact modelling (detailed in companion product 2.7 (Ickowicz et al., 2018)) was undertaken for five landscape groups in the zone of potential hydrological change, namely the ‘Springs’, ‘Floodplain, terrestrial GDE’, and ‘Non-floodplain, terrestrial GDE’ landscape groups, as well as for the ‘Streams’ composite grouping, which combines the ‘Streams, GDE’ and ‘Streams, non-GDE’ riverine landscape groups. The key outputs from the receptor impact modelling are: (i) a qualitative mathematical model / signed digraph that identities important ecosystem components and dependencies for the landscape group, and (ii) predictions of ecological responses to altered hydrological conditions by a small number of receptor impact variables which represent ecosystem indicators for the landscape group. Critically, the receptor impact variables relate to the predicted level of response across the entire landscape group, given the hydrological change modelled at a particular location. While these do not represent predictions at particular locations they provide a strong indication of when the hydrological change may be commensurate with potential ecosystem change. Importantly though, other types of relevant information acquired from expert opinion and qualitative mathematical models, and coupled with available understanding of hydrological systems and processes, should all be considered to ensure that the risk predictions are based upon as many lines of evidence as possible.

3.4.1.2 Standing water levels in the zone of potential hydrological change

An important consideration in the assessment of potential impacts and risks to landscapes is the availability of groundwater to GDEs, including deep-rooted vegetation, stream baseflow and springs. However, groundwater availability is controlled by more than simply groundwater depth and requires an understanding of the connectivity between surficial and deeper aquifers, as well as the relative hydraulic pressure in different aquifers. For groundwater leakage to occur between aquifers or across aquitards, hydraulic pressure has to be either higher or lower than the pressure within an adjoining hydrogeological unit (i.e. a hydraulic gradient has to exist to create the potential for flow to occur). There also needs to be either a suitably permeable connective pathway (e.g. a fault or other type of geological structure), or a sufficient pressure differential to induce flow across lithological boundaries with hydraulic conductivities that are lower relative to that of adjoining aquifers. Major features of the various groundwater systems of the assessment extent are described in detail in companion product 2.1-2.2 (Evans et al., 2018a) and Section 2.3.2 of companion product 2.3 (Evans et al., 2018b) for the Galilee subregion.

One measure of depth to groundwater is the standing water level in a bore (i.e. the depth from a reference point at the surface (commonly the top of the bore casing) to water in a bore). It does not necessarily represent the level at which groundwater occurs naturally below surface, except under some unconfined aquifer conditions. Rather, it represents the level that groundwater will rise to in a bore due to pressures in the aquifer in which the bore screen is set. In this case, the bore acts as a zone of very high connectivity to the surface, allowing the groundwater to rise to its highest potential level. Depth to water level varies between individual bores and depends on a number of factors, including aquifer hydraulics and configuration, whether the bore is in a recharge or discharge area of an aquifer; climate, topographic location; and localised conditions, including well construction parameters and any nearby groundwater extraction.

Figure 39 (a and b) shows depth to standing water levels measured for bores screened in Cenozoic aquifers and various sedimentary rock aquifers of the Galilee Basin, both within and nearby to the zone of potential hydrological change. In many bores the depth to standing water, particularly in topographically elevated areas, is greater than 20 m. While there may be some exceptions (e.g. certain species of deep-rooted trees), most of the native vegetation within the zone of potential hydrological change is unlikely to utilise groundwater if depth to the watertable is greater than 20 m. Eamus et al. (2015) provided a review of GDEs and, among other aspects, their relationship to factors such as depth to groundwater.

Cenozoic sediments occur across much of the zone of potential hydrological change (Section 3.3). Bores screened in these aquifers tend to be located near major streams in the zone, such as Native Companion Creek and the Carmichael River (Figure 39a). Although standing water levels in Cenozoic sediments can occur within a few metres of the surface, no bores screened in Cenozoic aquifers have artesian pressures. Most bores in the zone of potential hydrological change (Figure 39b) are screened in sedimentary rock aquifers belonging to the Galilee Basin, such as the Clematis Group or upper Permian coal measures.

In the area where Dunda Creek joins the Belyando River (Figure 39a), and also along nearby stretches of the Carmichael River, standing water levels are generally less than 10 m below surface. Potentiometric surface mapping (of water levels for different aquifers) suggests that these areas may represent a zone of regional groundwater discharge from Galilee Basin aquifers (companion product 2.3 for the Galilee subregion (Evans et al., 2018b)). These areas also coincide with the occurrence of major spring complexes that source water from aquifers of the Galilee Basin (e.g. Doongmabulla Springs complex, Mellaluka Springs). In addition, reliable groundwater discharge occurs locally into the nearby Carmichael River, supplying some component of baseflow to the river. Further discussion of the application of remotely sensed imagery to assess groundwater input to springs and streams in this area is in Section 3.5.2 . 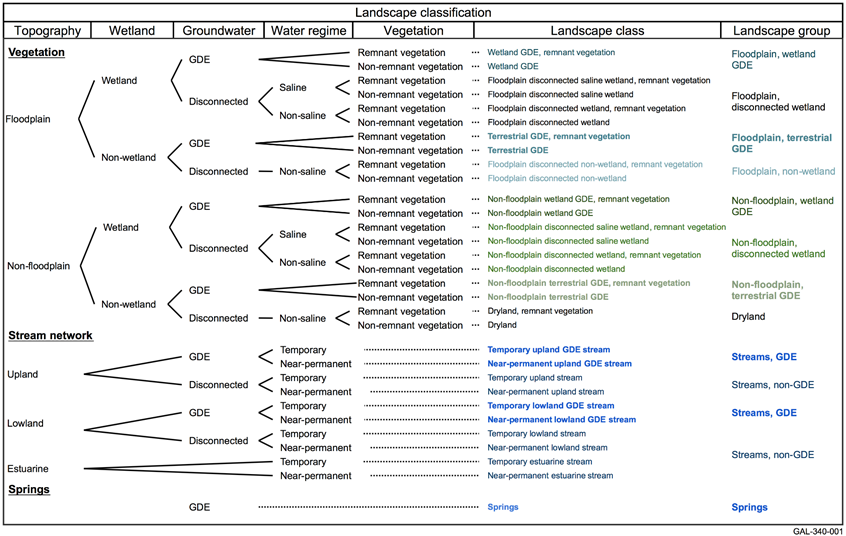 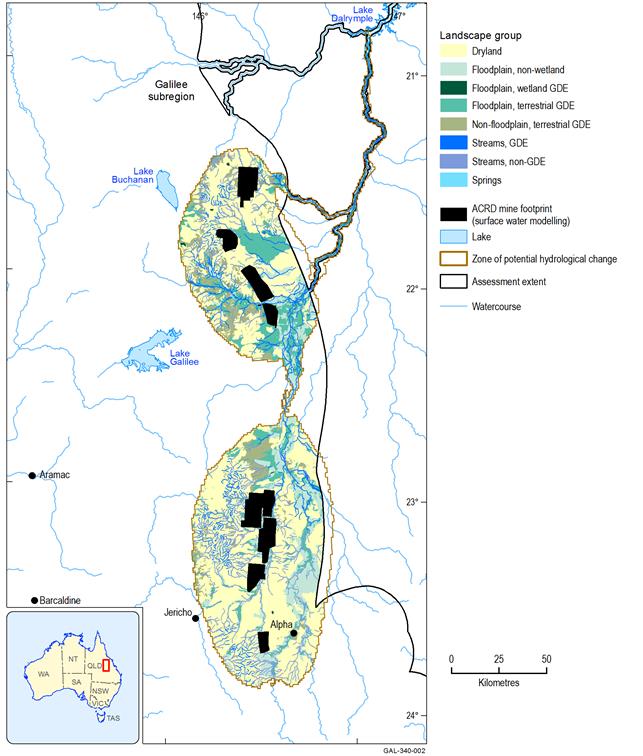 Standing water level is a measure of the depth to water from a reference point, usually the top of the bore. It represents the potential level that groundwater may rise to if it is unimpeded by overlying geological layers.

The Galilee subregion boundary coincides with the margin of the geological Galilee Basin. The Eromanga Basin overlies the Galilee Basin to the west of the zone of potential hydrological change.