The Surat CMA extends north of the Maranoa-Balonne-Condamine subregion, which means that the OGIA model covers parts of three distinct geological basins: the southern Bowen Basin, the Surat Basin and the western Clarence-Moreton Basin. The OGIA model includes groundwater extraction for CSG production from the Walloon Coal Measures within the Surat geological basin (that is relevant to this Assessment) and from the deeper Bandanna Formation of the underlying Bowen geological basin along a north–south trending zone to the east of Injune (that is outside of the Maranoa-Balonne-Condamine subregion). The OGIA model also includes conventional oil and gas production that targets the Evergreen Formation, Precipice Sandstone and Clematis Sandstone in the Surat Basin. The stratigraphy of the three geological basins and corresponding model layers in the OGIA model is shown in Figure 6.

The OGIA model covers an area of 550 km (east–west) × 660 km (north–south). The model has 19 layers to represent all major aquifers, aquitards and productive coal measures (Figure 6). Each model layer is divided into 1.5 km × 1.5 km model cells. This means that all geological formations are collectively represented by more than three million building blocks of 1.5 km × 1.5 km square cells, stacked into 19 layers (QWC, 2012). The thickness of each layer in each column represents the mean formation thickness at that location and was summarised from pre-existing stratigraphic interpretations of borehole logs and surfaces developed by previous studies. Initial values for hydraulic parameters were estimated from various sources, including more than 13,000 drill stem test (DST) data points recorded in the Queensland Petroleum and Gas Exploration Database (QPED) and more than 1,000 pump test records from the Department of Natural Resources and Mines (DNRM) groundwater database (QWC, 2012). 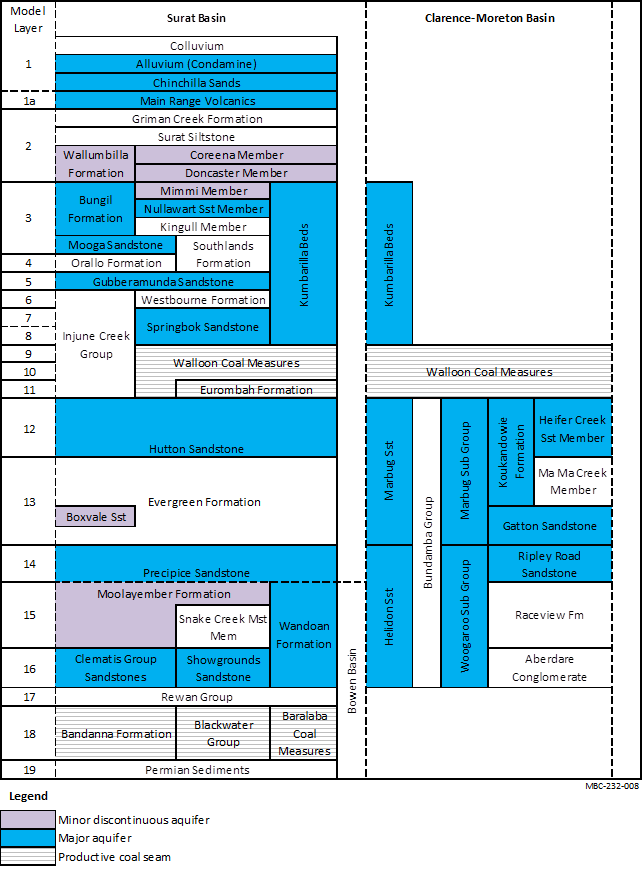 Figure 6 Stratigraphy of the Surat, Bowen and Clarence-Moreton basins and the corresponding model layers in the Office of Groundwater Impact Assessment (OGIA) model

The OGIA model is a simple, idealised representation of a complex three-dimensional geologic system that is converted into a three-dimensional mathematical representation of the physical system and flow processes. One simplification is the determination of hydraulic properties used to represent the coal seams and interburden in the Walloon Coal Measures. Another is the simulation of single-phase flow, instead of dual-phase flow of water and gas near the extraction wells. These simplifications mean that pressure changes in the immediate vicinity of CSG production wells are not well simulated. However, these effects are expected to be minimal for receptors associated with aquifers other than the Walloon Coal Measures. Single-phase groundwater modelling tends to over-predict water level drawdown, thus providing a conservative estimate of impacts at receptors. Moore et al. (2015) describes the unique challenges of representing processes that operate at two very different scales in regional-scale models.

The OGIA model was calibrated in steady state to replicate pre-CSG extraction conditions, corresponding to the historical conditions of the groundwater system prior to the first development of CSG activities for the period 1960 to 1995. It was assumed that a steady-state model provided a practical representation of the system at that time for regional modelling, where the majority of boreholes show relatively minor trends over the period 1960 to 1995 in the Surat CMA (QWC, 2012).

The OGIA model was set up to make predictions starting from 1995 using initial boundary conditions from the steady-state model (QWC, 2012). The steady-state run accounted for the water extraction for all existing water use in 1995, that is, all non petroleum & gas (P&G) water extraction. A more detailed transient sub-model of the existing Daandine Coal Seam Gas Project field was used to calibrate storage coefficients. Calibrated storage, hydraulic conductivity, recharge and general head conductance from the steady-state model calibration were used in the predictive runs.

Two separate predictive runs were made for the underground water impact report (UWIR): a Base Run and a P&G Production Run (QWC, 2012). The Base Run involved running the model with water extraction from 1995 onwards accounting only for non P&G extraction. In the P&G Production Run, water extraction from current and proposed P&G activities was added to the Base Run water extraction. The difference in predicted water levels between the P&G Production Run and the Base Run provides an estimate of water level impacts that are attributed to P&G activities. This is identical to the approach used in the BA, where numerical groundwater modelling results are primarily presented as the probabilistic estimates of the difference in groundwater drawdown between two possible futures – the baseline and the coal resource development pathway (CRDP).

The first stress period in the transient OGIA model was the same as the steady-state OGIA model, simulating historical conditions from 1960 to 1995 (QWC, 2012). Subsequent stress periods were added to simulate the groundwater flow system accounting for the stresses caused by groundwater extraction for CSG development together with groundwater stresses from other activities including water use for irrigation and water supply. A total of 259 stress periods were considered for simulation of the flow system over a period of 3000 years. Simulated well spacing and the sequence of development was in accordance with the information provided by the tenure holders to the Queensland Water Commission (currently known as OGIA) through the main extraction period from 1995 to 2050. The OGIA model is re-run annually based on the latest available industry development plans. Changes since the previous report was prepared are described in the annual reports (e.g. OGIA, 2014).

Uncertainty analysis by OGIA for BA groundwater modelling in the Maranoa-Balonne-Condamine subregion uses 200 calibration-constrained parameter sets to calculate probabilistic estimates of hydrological changes arising from coal resource development. The 200 parameter sets are not re-calibrated after the model boundary conditions are altered to represent the open-cut coal mines. The uncertainty analysis is discussed in Section 2.6.2.8 .