The entire Maranoa-Balonne-Condamine subregion falls within the boundary of the geological Surat Basin, which forms part of the wider Great Artesian Basin (GAB). The GAB is not a geological basin but is rather a hydrogeological or groundwater basin (Smerdon et al., 2012). Coal mining and CSG development in the Maranoa-Balonne-Condamine subregion targets the Walloon Coal Measures of the Surat geological basin. The Walloon Coal Measures ‘comprises of a varied sequence of sediments which contain material of high and low permeability. The coal seams are often the main water-bearing layers within a sequence of low permeability mudstones, siltstones or fine-grained sandstones’ (QWC, 2012). Coal seams usually exist as numerous thin non-continuous stringers or lenses separated by bands of low permeability sediments. The Walloon Coal Measures outcrop along the north, north-west, north-east and east of the Surat Basin. Coal mining is located close to the outcrop areas in the north-east and east of the subregion.

Companion product 2.3 for the Maranoa-Balonne-Condamine subregion (Holland et al., 2016) contains a more detailed summary of the key system components, processes and interactions, including maps and cross-sections of the main aquifers and aquitards. The main aquifers within the Maranoa-Balonne-Condamine subregion, listed from deepest to shallowest, are the Precipice, Marburg, Hutton, Springbok, Gubberamunda and Mooga sandstones and the Bungil Formation. The deeper sandstone aquifers of the Clematis Group and equivalent formations of the Bowen Basin are also recognised as GAB aquifers. Major aquitards in the subregion, listed from deepest to shallowest, are the Rewan Group, Evergreen, Birkhead, Westbourne, Orallo, Wallumbilla and Griman Creek formations and their equivalents. The regional aquifers above (Springbok Sandstone) and below (Hutton Sandstone) the Walloon Coal Measures are separated by low permeability aquitard formations. These regional aquifers provide important groundwater supplies for agriculture, industries and towns.

Other than the GAB aquifers, the major aquifer systems in the Maranoa-Balonne-Condamine subregion are the alluvial and basalt aquifers. The Condamine Alluvium is the most significant and highly developed alluvial groundwater system in the subregion. It is heavily used for groundwater supply predominantly for irrigation, but also for town water supply, domestic, stock, watering and industrial uses to a lesser extent. Significant aquifers are contained in the Main Range Volcanics aquifer and are used for irrigation, stock and domestic and town water supplies. Basalt aquifers also occur in the north of the subregion overlying the sedimentary rocks of the Bowen Basin.

Most groundwater recharge occurs in the aquifer outcrop areas in the north, north-west, north-east and east along the Great Dividing Range. Direct recharge from rainfall via infiltration and leakage from streams or overlying aquifers are the two dominant mechanisms by which recharge reaches the aquifers. The major flow directions are from recharge areas to the south, south-west, and west although there is a minor northward flow component in some aquifers. Flow velocities have been estimated to be very small, in the range 1 to 5 mm/year (Habermehl, 1980). Groundwater movement is dominated by sub-horizontal flow in the aquifers, but vertical leakage from the aquifers upwards through the low permeability aquitards occurs throughout the GAB at a much slower rate. Natural discharge from the Surat Basin occurs via vertical leakage through aquitards, springs, rivers, and subsurface flow into adjoining areas. 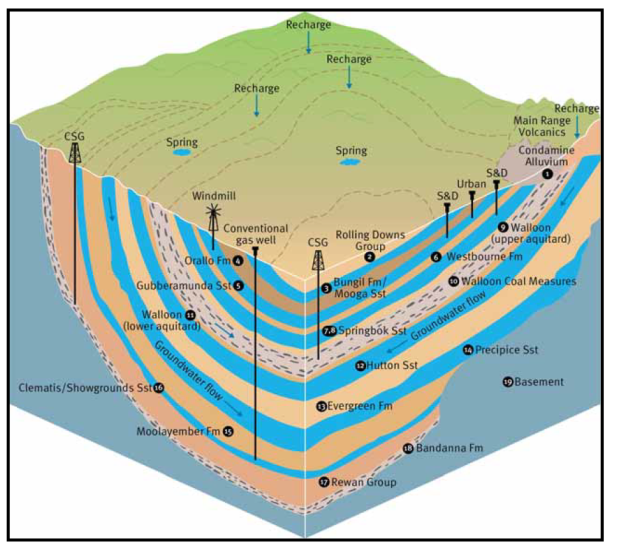