The Talinga CSG Project is co-owned and operated by Origin Energy as part of the Australia Pacific LNG Pty Limited (APLNG) partnership. It is located in PL 226 near Chinchilla in the central Walloon fairway between the Berwyndale South and the Argyle-Kenya CSG fields (see Figure 7), which are co-owned and operated by QGC. The current development at the Talinga gas field is indicated in Figure 9. The Talinga CSG Project consists of 111 operating CSG wells (Origin Energy, 2011) with a current mean field production rate of 98 terajoules per day (TJ/day) reported for the March 2014 quarter (Origin Energy, 2014). Commercial production in Talinga started December 2007 (Miningoilgas, 2014b). The gas is processed at the Talinga Gas Processing Facility, which currently has a capacity of 120 TJ/day with a planned expansion to 140 TJ/day (AEMO, 2013). The Talinga Gas Processing Facility supplies gas to power stations and other commercial clients (Origin Energy, 2011). The 2P reserves at Talinga were 569 PJ as of 31 December 2013 (DNRM, 2014d). 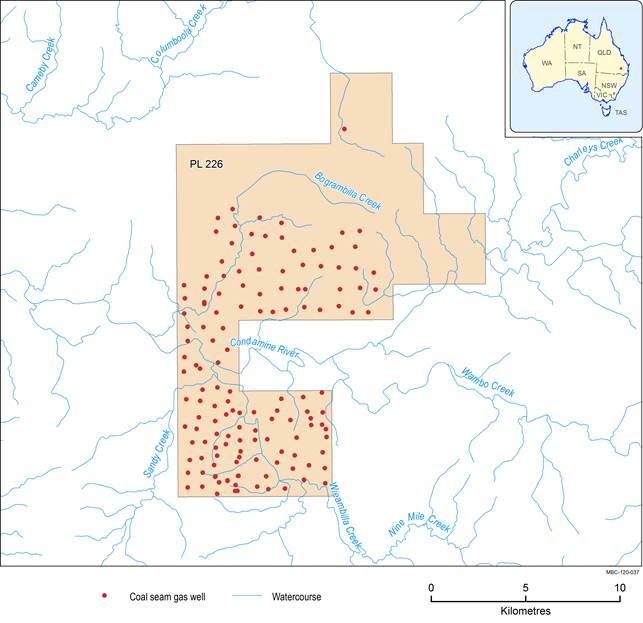