Cameby Downs Mine is an open-cut mining operation at ML 50233 about 30 km north-west of Chinchilla producing low ash, export quality thermal coal. Coal production at Cameby Downs Mine commenced in late 2010. The mine is owned by Yancoal which acquired the lease from the previous owners, Syntech Resources Pty Ltd, in 2011 (Yancoal Australia, 2012). Stage 1 of the project, currently in operation, is producing about 1.4 Mt/year of thermal coal (Clifford Chance, 2011) and onsite facilities include coal handling and preparation plants.

Resources at the mine comprise of 208 Mt measured, 247 Mt indicated and 233 Mt inferred and proved plus probable (2P) reserves of 440 Mt (proved 189 Mt and probable 251 Mt). Coal deposits are in the Juandah Coal Measures where a mineable (extractable using current procedures) coal unit of individual coal seams is up to 20 m thick. Conventional truck and shovel mining techniques are used at the mine. Some very low ash coal is taken straight to the stockpile, whereas other coal is processed onsite at the coal handling and preparation plant. The mine has a contract for using CSG water, which is used for dust suppression and washing coal at a rate of 1500 ML per year (Psi‑Delta, 2010, p. 134).

The initial concept for the mine was a two stage development. The first stage is now complete and running at capacity. Subject to additional approvals and infrastructure becoming available, the capacity could be increased in the longer term to over 20 Mt/year of coal product during the second stage (Queensland Government, 2010; Yancoal Australia, 2012). As timing of infrastructure upgrades is unclear, expansion plan timing also remains uncertain (Yancoal Australia, 2012). Current water usage at the site is not reported. 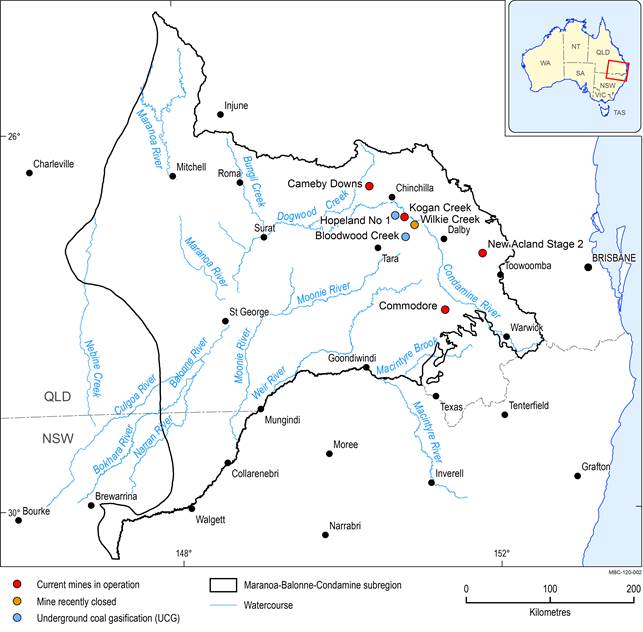