Within the Pedirka Basin, coal seams are a characteristic of the upper member of the Purni Formation. Coal resources associated with the Purni Formation may be found in both the western (Eringa Trough) and eastern (Madigan Trough) depocentres (Figure 21). The western depocentre contains up to 1000 m of Permo-Carboniferous strata at depths of less than 1500 m. In contrast, the eastern depocentre contains a Permo-Carboniferous sedimentary package between 300 and 400 m thick, at depths exceeding 2000 m (DMITRE, 2012).

Currently, most of the coal in the eastern Pedirka Basin appears to be too deep for coal seam gas extraction using existing technologies, although some thermogenic coal seam gas plays may be present. In contrast, although coals within the western depocentre not as deep as those within the eastern deocentre, they are generally determined to be too immature for thermogenic gas generation. That being said, extraction of biogenic coal seam gas may be viable if suitable trap sites can be identified. It is noted that slightly elevated mud gas contents were reported from Purni coals at depths of approximately 600 and 1500 m from drill-holes Mt Hammersley and Purni 1, respectively. Additionally, it is currently considered that the paucity of knowledge, remoteness and depths of coal resources within the Pedirka Basin would preclude economically viable extraction at least in the near term.

Based on palynological studies, the age of the Purni Formation covers a time period inclusive of most of the Permian, with coal seams in the upper member of the Purni Formation more likely to be Guadalupan epoch (approximately 270 Ma to 260 Ma). By contrast coal seams of the lower member of the Purni Formation are likely to be of Sakmarian age (approximately 295 to 290 Ma) (Munson and Ahmad, 2012). Information from structural and tectonic studies (refer to Section 1.1.3.2) suggests that sedimentation associated with the Pedirka Basin continued throughout the Permian, eventually shifting eastward and continuing through the Triassic to form the Simpson Basin succession.

Thermal history modelling of apatite fission tracking results from petroleum exploration wells drilled within the Eringa Trough and outcrop samples presented by Tingate and Duddey (2006) suggested that the base of the Permian in the deepest part entered the upper part of the oil generation window in the Permian and passed through the main oil window in the Cretaceous. Evidence for a recent increase (<5 Ma) in geothermal gradient is not thought to have had sufficient time to increase the thermal maturity of most formations within the Pedirka subregion (Tingate and Duddey, 2006). 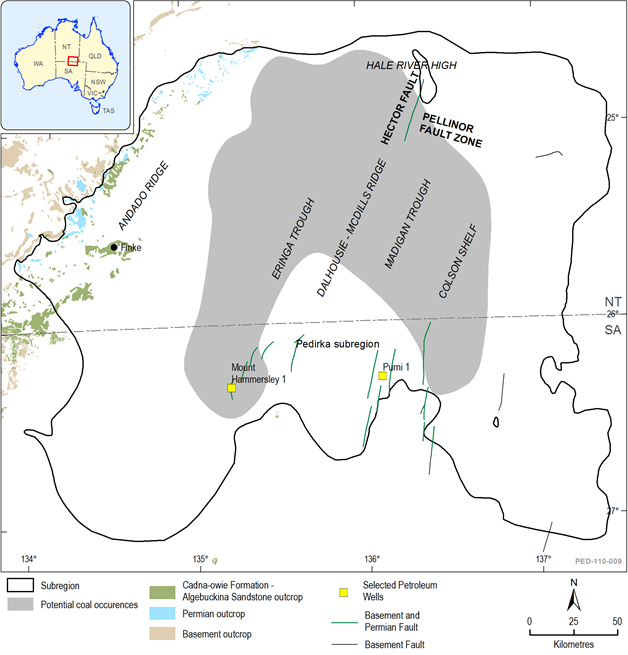