The development of conceptual models describing the hydrodynamics and flow characteristics of groundwater systems in sedimentary basins such as the Pedirka Basin, as well as determining the economic potential of any contain coal resources, require an understanding of their structural and tectonic history. Such an understanding provides important insights into the origins of basin architecture, deformation responsible for the development of sub-basins or preferential flow paths and the origins of sedimentary successions. The following provides a brief summary of pertinent information concerning the structural and tectonic history of the Pedirka Basin.

After a number of Archean cratons amalgamated to form the Australian continent (Powell and Pisarevsky, 2002; Powell et al., 1993), a series of tectonic events commencing in the Late Cambrian resulted in the development of the structural architecture underpinning the Pedirka Basin. Pedirka Basin architecture is largely controlled by Proterozoic and Early Phanerozoic tectonics and the deep-seated structures that formed during these times.

During the Late Proterozoic to Early Phanerozoic, plate divergences formed complex continental margins. The inception of a number of basins have been interpreted as failed rift arms of deeply penetrating triple rift junctures that formed along these plate margins. Such basins include (but are not restricted to) the Officer, Amadeus and Warburton. The eastern Australian margin at that time was defined by a complex rift system. An interpreted triple rift junction in the vicinity of this margin is inferred to have occurred near the present day Pedirka Basin and southern Cooper Basin (Questa, 1990).

Deformation associated with the Delamerian Orogeny (Late Cambrian) saw the conversion of eastern Australia to a convergent plate margin. Development of the eastern plate margin proceeded via the episodic accretion of magmatic arcs as terranes. The Delamerian Orogeny was associated with a number of west-north-west compressive tectonic events that produced north trending thrusts, north-west trending transgressive shears, recumbent folds, igneous intrusions and metamorphism (Cotton et al., 2006), as well as inverting parts of the Adelaide Fold Belt. Cotton et al. (2006) also suggested that the deep crustal scale, length and planar form of these structures were favourable for reactivation during several later phases of tectonism.

Following the Delamerian Orogeny, deposition of sediments within a fore-arc basin associated with terrane accretion occurred during the Late Cambrian to Ordovician, forming clastic sedimentary deposits of early Paleozoic basins which, in part, underlie Permian strata in central Australia. The Pertnjara Orogeny during the Early to Mid Devonian resulted in uplift and erosion in the Pedirka Basin region. In particular uplift during these times formed the Black Hills Range, the north-western boundary of the Eringa Trough, and provided a source of sediment during the Late Devonian (Finke Group).

Cotton et al. (2006) suggested that north-west orientated compression and uplift associated with the Alice Springs Orogeny (Devonian and Carboniferous), had a great influence on the structural grain of the Permo-Carboniferous basins (Cooper, Pedirka and Arckaringa) of central Australia. In particular, the Alice Springs Orogeny resulted in further remobilisation of Archean basement and over-thrusting causing high amplitude folding of existing basinal strata. This resulted in the formation of domal trends such as the Gidgealpa—Merrimelia—Innamincka (GMI) Ridge, Dalhousie–McDills Ridge and Birdsville Track Ridge that controlled the position of depocentres for Permo-Carboniferous sedimentation (Karlstrom et al., 2013; Questa, 1990). Gravestock (1995) described crustal shortening of up to 20 km and uplift of 3 km as a consequence of this event.

The period of tectonic stability following the Alice Springs Orogeny lead to glaciogenic and quiescent marine conditions followed by lacustrine, fluvial and backswamp sedimentation, forming the Crown Point and Purni formations of the Pedirka Basin. 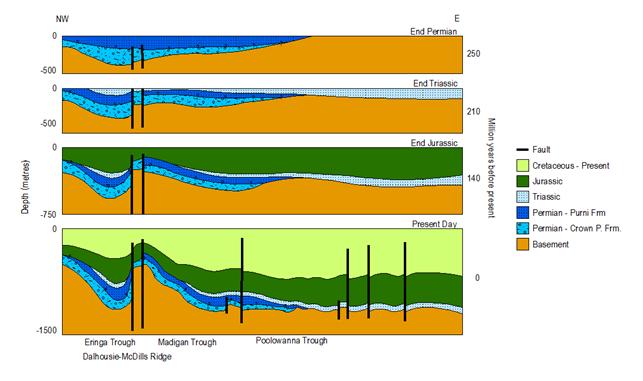 Post-Paleozoic, further periods of tectonic quiescence and down-warping have resulted in basinal sedimentation during the Mesozoic (Eromanga Basin) and Paleogene to Neogene (Lake Eyre Basin). Compression and uplift events during the Early Cenozoic (approximately 50 Ma) and in the last 15 to 5 Ma have caused further deformation of Permo-Carboniferous sediments, as well as terminating periods of sedimentation associated with the Mesozoic and Cenozoic respectively (Senior and Habermehl, 1980; Toupin et al., 1997; Karlstrom et al., 2013; Questa, 1990). Deformation included re-activation of pre-existing faults as well as associated folding (Figure 20). Current intraplate tectonic activity is interpreted to be a function of compression caused by the continents northward drift and subsequent collision with the Indonesian Archipelago, a regime that commenced approximately 43 million years ago (Sandiford et al., 2009).