The Pedirka subregion is located centrally over the SA-NT border (Figure 5), approximately 860 km north north-west of Adelaide and 160 km south of Alice Springs. The subregion area is based on the subsurface extent of the Pedirka Basin, which covers an area of approximately 71,000 km2.The topography of the Pedirka subregion is subdued with the predominant landscape feature being sandy deserts, gravelly ‘gibber’ plains and tablelands that support perennial grass and sparse chenopod, samphire or saltbush shrubland vegetation. In the centre and east of the basin, longitudinal dunes of the Simpson Desert can extend for several hundred kilometres and attain heights of up to 40 m (Ambrose, 2006). Anastomosing channels that form wide, gently sloped valleys, swales and floodplains provide much of the observed topographic variability.

The northern and western margins of the Pedirka subregion are defined by highlands and plateaux of the Newland and Musgrave Ranges, and Arunta Block (Figure 5). The tallest peak in the Musgrave Ranges is Mount Woodroffe (1435 m); Keppel et al., (2013) suggests that the topographic elevation of the ranges relative to the basinal areas provides gravitational potential to drive groundwater flow within the subregion. Of particular importance is the Dalhousie-McDills Ridge which forms a low rise that transects the Pedirka subregion from south to north. Aeolian-driven deflation is described by Mabbutt (1977) as an important process shaping the physiology of the region; longitudinal sand dunes in the plains and lunette dunes in the vicinity of playas provide important topographic variance. 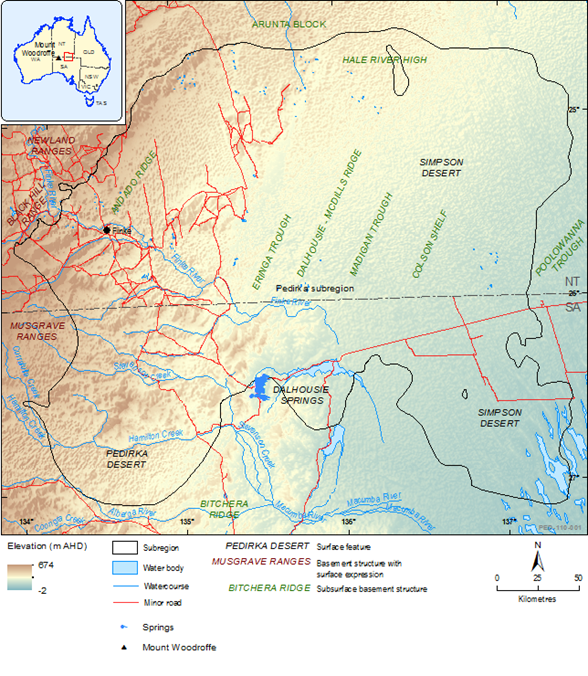