The Pedirka Basin is bound to the south-west by the Musgrave Ranges and to the west by the Newland Ranges. The northern boundary is defined by the Arunta Block and a complex fault block consisting of Mesoproterozoic to Cambrian metasedimentary and volcanic rocks called the Hale River High, the location of which is controlled by the Pellinor Fault Zone (Munson and Ahmad, 2012). A major north-west structural feature called the Dalhousie–McDills Ridge dissects the basin into eastern (Madigan and Poolowanna troughs) and western (Eringa Trough) portions (Figure 15 and Figure 16). Thin Permian strata draped over the ridge connect the two troughs. The basin reaches a thickness of up to 1525 m within the Eringa Trough (Giuliano, 1988). The Poolowanna Trough occupies the far eastern portion of the basin and is separated from the Madigan Trough by the Colson Shelf, upon which approximately 135 m of Permian rocks have been deposited (Munson and Ahmad, 2012, after Central Petroleum, 2011). Sedimentary rocks within the Poolowanna Trough are largely of Triassic age (Simpson Basin), with Permian rocks occurring along the western flank of the trough.

The Pedirka Basin is separated from the Arckaringa Basin to the south and the similarly aged Cooper Basin to the east by the basement highs of the Bitchera, Muloorina and Birdsville Track ridges. Hibburt and Gravestock (1995) postulated that the Pedirka Basin was once connected to the other Permo-Carboniferous basins across these basement highs but was subsequently isolated by the erosion of Permian rocks.

The Pedirka Basin unconformably overlies the early Paleozoic Amadeus and Warburton basins and Proterozoic basement rocks and unconformably underlies the Mesozoic Eromanga Basin (Great Artesian Basin, GAB). Much of the Pedirka Basin occurs subsurface at depths greater than 400 m. Only the Crown Point Formation outcrops, restricted to the north–west margin of the basin in the NT (Munson and Ahmad, 2012) (Figure 15).

The Permian sedimentary strata of the Pedirka Basin appear to be significantly faulted, with a number of normal and reverse faults identified; resulting in vertical displacement or the removal of rocks by erosion (Figure 17). In some instances, displacement appears to have caused at least localised discontinuity within the Permian sequence; this is particularly evident in the vicinity of the Dalhousie–McDills Ridge (Figure 16). This feature may have led to the formation of partially disconnected hydrogeological sub-basins within the greater Pedirka Basin. Additionally, the base of the Permian strata forms a complex, glacially-scoured surface with significant erosional relief.

Current intraplate tectonic activity is interpreted to be a function of compression caused by the continent’s northward drift and subsequent collision with the Indonesian Archipelago, commencing approximately 43 million years ago (Sandiford et al., 2009). In the general vicinity of the Pedirka Basin, this compression is primarily orientated east-west and is generally larger than the principal vertical stress (Hillis et al., 1998; Hillis and Reynolds 2000; Reynolds et al., 2005). 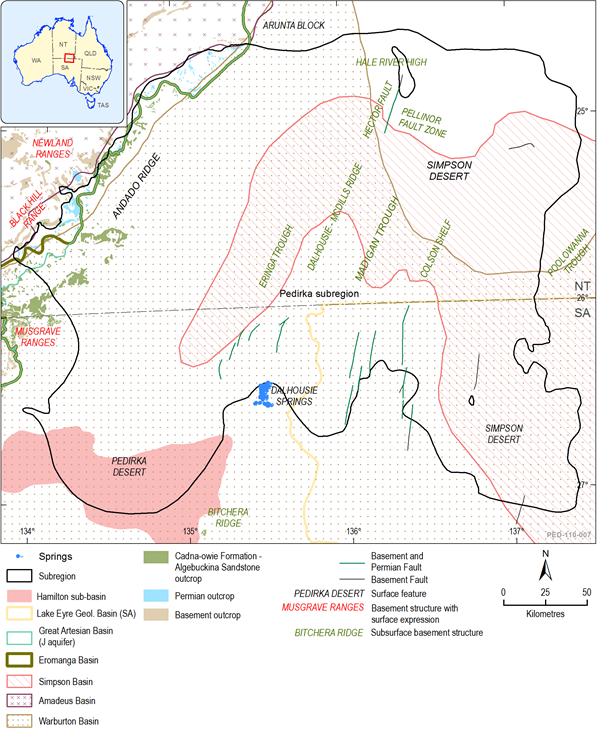 Note: the Lake Eyre geological basin has only been mapped for SA. 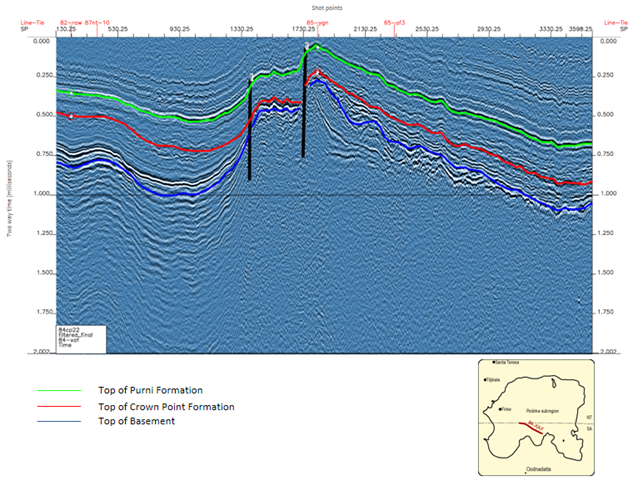 Note: These faults may provide pathways for groundwater movement between the Permian aquifers and the overlying GAB aquifers, as well as the potential demarcation of sub-basins within the Pedirka Basin. Also note the significant difference in formation thickness when comparing the left (western) and right (eastern) sides of the fault block. Depth can be approximated from TWT (milliseconds) using the following formula: Depth (m) = 1.5*(milliseconds) – 328. 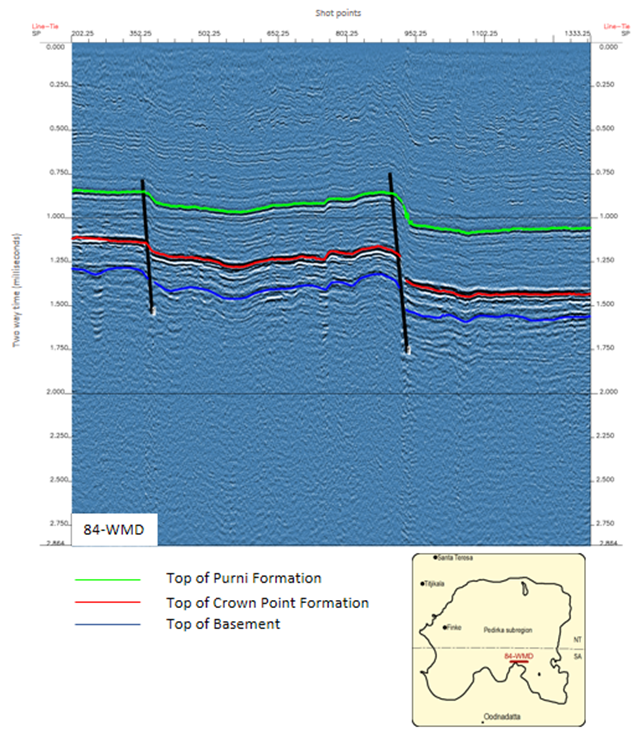 Note: Although the displacement along the fault within the western half (left hand side) is not sufficient to completely disrupt connectivity between formation strata, the displacement along the fault within the eastern half of the section is great enough to cause significant disconnection within the Permian sequence. The significance of faulting with respect to the hydrogeology of Pedirka Basin aquifers is highlighted in two ways: a) faulting may cause partitioning and therefore the formation of sub-basins and b) faulting may enable vertical connectivity between overlying or underlying aquifers. Depth can be approximated from TWT (milliseconds) using the following formula: Depth (m) = 1.5*(milliseconds) – 328.

Neotectonic expressions in the general region include reported seismic activity in the vicinity of the Hector Fault near the northern margin, as well as to the east of the eastern margin of the Pedirka Basin (Geoscience Australia, 2014). Additionally, several authors including Aldam and Kuang (1988), Karlstrom et al. (2012) and Keppel (2013) have summarised and presented evidence that GAB springs, including Dalhousie Springs located on the southern margin of the Pedirka Basin, may also be an expression of neotectonic activity.

Most of the Pedirka subregion, especially within the NT, has a regolith profile composed of aeolian sediments (Craig, 2006) (Figure 18). A notable exception to this occurs in the south-west corner of the subregion, predominantly within SA, where there are erosional landforms composed of moderately to highly weathered bedrock, or residual soil materials derived from overlying Mesozoic rocks. Depositional landforms as well as associated alluvial, colluvial and other transported sediments are primarily restricted to drainage channels. Most of these drainages have headwaters in residual and erosional landforms bordering the north-west and western margin of the Pedirka subregion (Craig, 2006). Spring-related deposits are common near Dalhousie Springs, at the southern margin of the Pedirka subregion.