The Macquarie, Castlereagh and Bogan river basins contains a variety of wetland types including upland wetlands, semi-arid floodplains, inland billabongs and freshwater lakes. Mapping and prioritisation of wetlands in the Macquarie, Castlereagh and Bogan river basins has identified 11 Directory of Important Wetlands in Australia classifications throughout the area. There are 1,058,000 ha of wetlands, classified and mapped in 33,747 wetland units. High priority wetlands include the Macquarie Marshes, upper catchment wetlands, for example Billywillinga Creek wetlands near Bathurst, and lower floodplain wetlands such as Pangee Creek wetlands in the Bogan catchment (Central West CMA, 2008a). Overall, wetlands are in poor condition and face significant pressures from modification or changes to catchment structures and processes (e.g. urbanisation), changes in flow regimes and water quality, and degradation of wetland habitat (NSW Government, 2010d). Native fish populations are extremely poor and there are high numbers of exotic fish species, for example common carp (Cyprinus carpio), redfin (Perca fluviatilis), and brown and rainbow trout (Salmo trutta, Oncorhynchus mykiss). Macro invertebrate diversity is poor, and water quality trends in salinity, turbidity, nutrients, pesticides and thermal pollution are increasing (MDBA, 2010). High priority wetlands and rivers in the Macquarie, Castlereagh and Bogan river basins are shown in Figure 36.

The Macquarie Marshes are a large diverse wetland system in the lower Macquarie River. The site was listed on the Ramsar List of Wetlands of International Importance in 1986. It is significant because of the diversity of wetland types, its highly abundant and diverse waterbird populations and its support for colonial nesting and nationally threatened species. The critical processes and components that support the site's ecological character are its hydrology, its aquatic ecosystems, and the diversity of wetlands that support waterbird breeding and nationally threatened species. Current threats to the site include water management (both flow regimes and structures), dryland salinity, fire management, pest management, channel erosion and climate change. In 2009, after a prolonged drought, the site was noted as having experienced a change in ecological character from a semi-permanent to an ephemeral wetland system. The cause of this was associated with changes to the flow regime resulting from river regulation and extraction. A ten-year response strategy has been developed by the NSW Government to restore the system to good health (NSW Government, 2012). The Macquarie Marshes have seen some of the largest waterbird breeding events in Australia (NSW Government, 2010a) and contain a range of vegetation types including river red gum woodland, water couch grasslands, coolibah-black box woodlands, lignum swamps, cumbungi and river cooba. These diverse environments provide habitat for 211 bird species, eight species of mammal, 15 frog species, 56 reptile species and 24 native fish species (Green et al., 2011).

The aquatic community of the Macquarie and Bogan rivers is part of the endangered aquatic ecological community in the natural drainage system of the lowland catchment of the Darling River, and includes 21 native fish species and hundreds of native invertebrate species that are found within the Darling River and associated streams, wetlands and anabranches (Green et al., 2011). 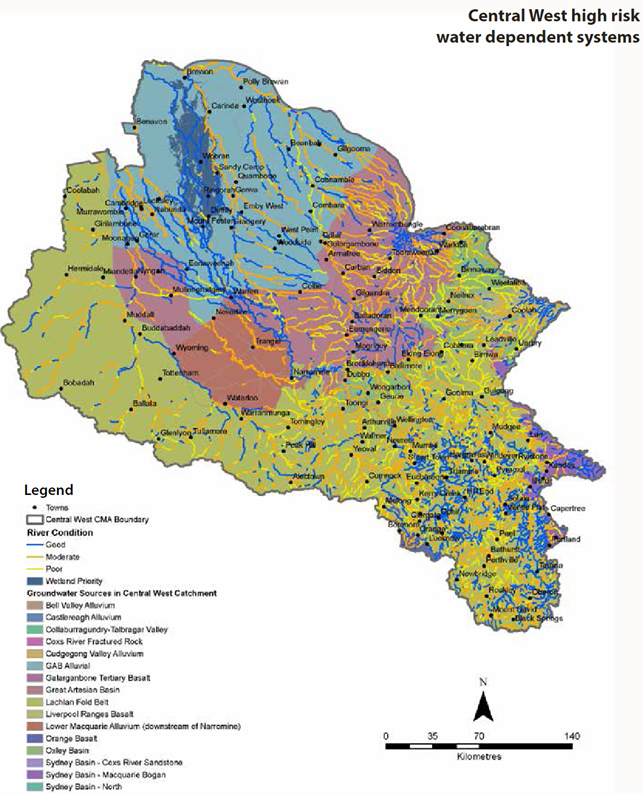 Four species predicted or known to occur in the Macquarie, Castlereagh and Bogan river basins are listed under the EPBC Act, the endangered trout cod and the vulnerable Murray cod, the critically endangered silver perch and endangered trout cod. A further three species listed under NSW’s Fisheries Management Act 1994 are known to occur in the natural resource management region. These include the purple-spotted gudgeon, the olive perchlet and the river snail. Aquatic species listed as threatened or endangered under either the EPBC Act or the NSW’s Fisheries Management Act 1994 are listed in Table 22.

All native fish in the lower Macquarie river basin typically recruit during spring and early summer, and thus appropriate flow regimes during this period are critical to the long-term survival of these species. For most species warmer temperatures are also important during this time. Winter and spring flood regimes are critical to provide floodplain food sources for adult fish prior to spawning (NSW Government, 2010a). The Macquarie Marshes are recognised as a refuge for waterbirds during dry times. Seventy-six species have been recorded in the marshes and 44 of these have been recorded breeding (NSW Government, 2010a), however bird numbers are showing a long-term decline (NSW Government, 2010b). Similarly, numbers of red bellied black snakes in the marshes are also in decline and this is believed to be linked to declines in frog numbers, a key component of their diet.