The Gunnedah Basin is a Permian and Triassic basin in NSW, covering approximately 15,000 km2 with about 36% of the basin falling within the Central West subregion (Tadros, 1993; O’Neill and Danis, 2013). The Permian to Triassic age Sydney Basin covers a portion of NSW, with 44,000 km2 of the Sydney Basin falling onshore with a further 5,000 km2 located offshore (Cadman et al., 1998). The Surat Basin unconformably overlies the uppermost unit of the Gunnedah Basin (Deriah Formation), and also extends beyond its boundaries (Figure 16). The Surat Basin is approximately 300,000 km2; of which 18% coincides with the Central West subregion. The Surat Basin is part of the larger subsidence-depositional system, which also includes the Eromanga, Carpentaria and Clarence-Moreton basins. These basins have formed across large parts of Queensland and northern NSW (Smerdon and Ransley, 2012).

There are currently no formally recognised sub-basins in the Surat Basin. However, the basin is commonly divided into distinct tectonostratigraphic regions based on the structural features that have controlled both the location and thickness of the sedimentary sequences. The structural region for the part of the Surat Basin in the Central West subregion is known as the Coonamble Embayment. The sedimentary infill of the Coonamble Embayment is relatively thin compared to parts of the Surat Basin in Queensland (Figure 18).

The subregion includes part ofthe northern Sydney Basin, where there are limited data (FrogTech, 2007). Various authors divide the Sydney Basin into northern, central and southern sections; others choose north-eastern, western, central and southern. FrogTech (2007) termed the section in this subregion as part of the Blue Mountains Plateau and the Western Onshore Basin. There appears to be no official divisional guide for the Sydney Basin, with many investigations choosing subdivisions suited to their own work. 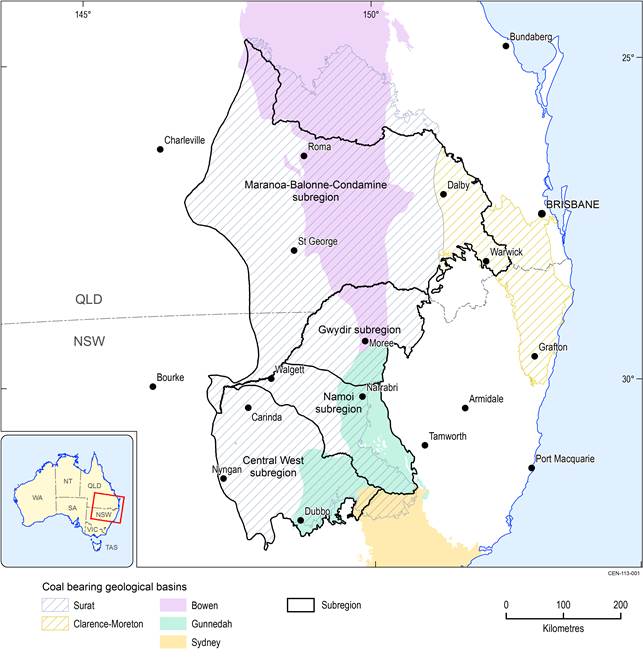 Figure 16 Location of the Central West subregion within the Northern Inland Catchments bioregion and its relation to the geological Surat, Gunnedah and Sydney basins 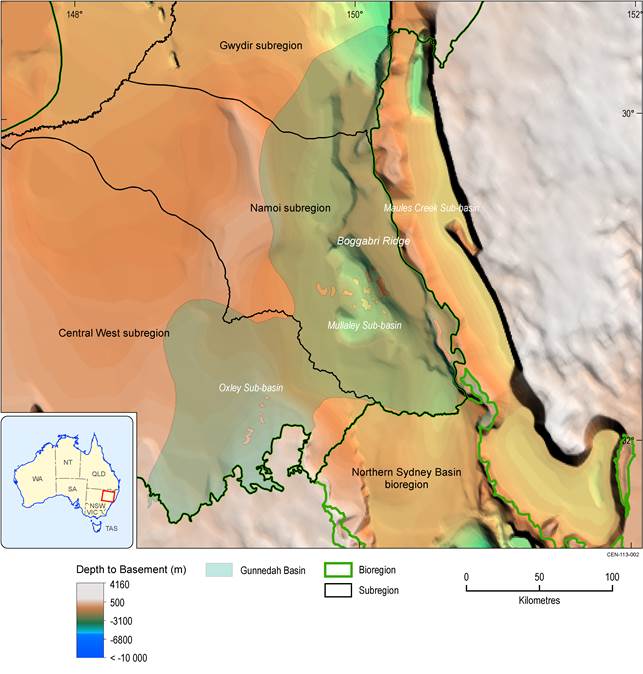 Figure 17 Division of the Gunnedah Basin into sub-basins

The sedimentary and volcanic infill of the Gunnedah Basin has a maximum thickness of about 3000 m. These sequences are overlain by up to 180 m of Early Jurassic volcanic rocks (Garrawilla Volcanics) (Danis et al., 2010; O’Neill and Danis, 2013). The Surat Basin sequence is thinner in comparison, with a maximum thickness close to 1000 m in the Central West subregion. However, its thickness varies spatially and it may also thin out and disappear in some parts of the Coonamble Embayment that coincide with the Central West subregion (McElroy, 1969; Exon, 1976).

The Coonamble Embayment region of the Surat Basin overlies the Gunnedah Basin in the Central West subregion. The total thickness of strata in both of these basins is relatively thin, less than 1000 m (Figure 18). A single trough in the south-west of the basin (Figure 18) indicated a rapid thickness change to roughly 1000 m, however there has been little to no work completed at the locality of this trough to provide an in depth stratigraphical or structural study.

The sedimentary rocks of the Gunnedah Basin rest unconformably on troughs and structural highs of Late Carboniferous to Early Permian volcanic rocks (Boggabri Volcanics and Werrie Basalt) and the basement rocks of the Ordovician to Early Carboniferous Lachlan Fold Belt (O’Neill and Danis, 2013). The Boggabri Ridge (Figure 17) was a major source of sediment input to the basin, but also acted as a barrier between the Maules Creek and Mullaley sub-basins (Figure 17) (Danis et al., 2010; Ward and Kelly, 2013). The Gunnedah Basin is bounded by the Lachlan Fold Belt and Rocky Glen Ridge to the west and the New England Fold Belt to the east, along the Hunter-Mooki Fault (Figure 18) (Tadros, 1993; Danis et al., 2010; O’Neill and Danis, 2013; Ward and Kelly, 2013).

The Gunnedah Basin is contiguous (that is, strata inter-finger) with the Bowen Basin to the north, and the Sydney Basin to the south (Danis et al., 2010; O’Neill and Danis, 2013). The Gunnedah Basin is separated from the Bowen Basin by the Moree High and the Narrabri High, and from the Sydney Basin by the Liverpool Ridge, the Mount Coricudgy Anticline and the Quirindi Anticline (Beckett et al., 1983; Tadros, 1993; Guoping and Keene, 2007; Danis et al., 2010; O’Neill and Danis, 2013). Structurally, the basin is characterised by a series of half-grabens and structural highs that formed during the Hunter-Bowen Orogeny (O’Neill and Danis, 2013). Detritus within the basin was mostly derived from the erosion and weathering of the older Paleozoic uplands adjacent to the basin, such as the Lachlan Fold Belt (Hamilton, 1991). 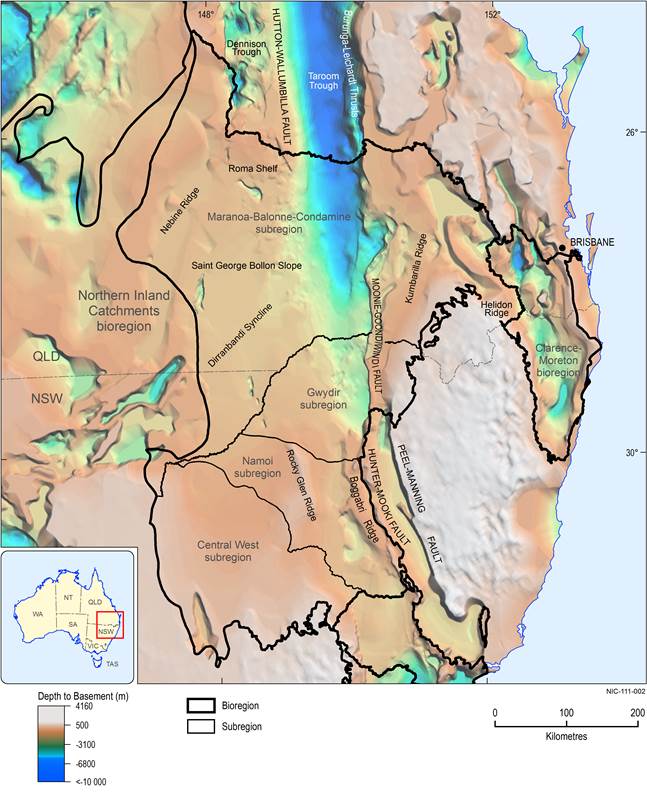 Deposition was continuous with the Gunnedah Basin and Sydney Basin so the exact boundary between the basins is questionable, with original investigations placing the division over the Mount Coricudgy Anticline but more modern work places it with the Liverpool Range (Bembrick et al., 1973; Harrington et al., 1989; Cadman et al., 1998). Some older studies include the northern portion of the Sydney Basin, between the Mount Coricudgy Anticline and the Liverpool Range, in the Gunnedah Basin. The basin is bounded in the west and the south by the onlap of sediments onto the Lachlan Fold Belt (Bembrick et al., 1973; Mayne et al., 1974; Cadman et al., 1988). In the north-east the Hunter-Mooki Thrust and New England Fold Belt control the limit of the basin’s extent with a zone of reverse faulting, including some sub-parallel to parallel thrust faults, while the south-eastern offshore limit of the basin is bounded at the continental shelf (Mayne et al., 1974; Harrington et al., 1989; Cadman et al., 1998). At the north-eastern boundary of the basin a series of normal faults have developed in relation the north-trending folds (Mayne et al., 1974). A series of anticlines (Lochinvar and Sedgefield) and domes (Belford and Loder) are separated from the Muswellbrook Anticline by a large synclinal structure (Mayne et al., 1974). The Lochinvar Anticline occurs near the Elderslie and Mathews Gap Faults, both of which have displacements up to 300 m, but parts of this anticline have been affected by the Radforslee and Greta overthrusts (Mayne et al., 1974). Most folding and faulting in the Lochinvar Anticline region has been attributed to the Hunter-Bowen Orogeny, with structures to the central and south of the basin forming later (Mayne et al., 1974). Further uplift during the Miocene and Early Pliocene resulted in the faulted and folded peneplain structures that form sections of the bordering New England Fold Belt and the Blue Mountains (Mayne et al., 1974).

The OZSEEBASE dataset (FrogTech, 2006) currently provides the most comprehensive interpretation of geological structures, published to date, in the Central West subregion (Figure 19). A series of roughly north-west trending reverse faults segment the western to central part of the subregion and are spaced 10 to 25 km apart. These are major basement structures that have undergone multiple episodes of displacement over a prolonged geological history. In the western part of the subregion there is significantly greater intensity and diversity of faulting. In this area, which coincides with the Gunnedah Basin, the most common fault types are north-north-west trending reverse faults and north-west trending strike-slip faults that have a sinistral sense of movement. Several of the reverse faults in this area are also major basement structures with a strike length greater than 150 km. 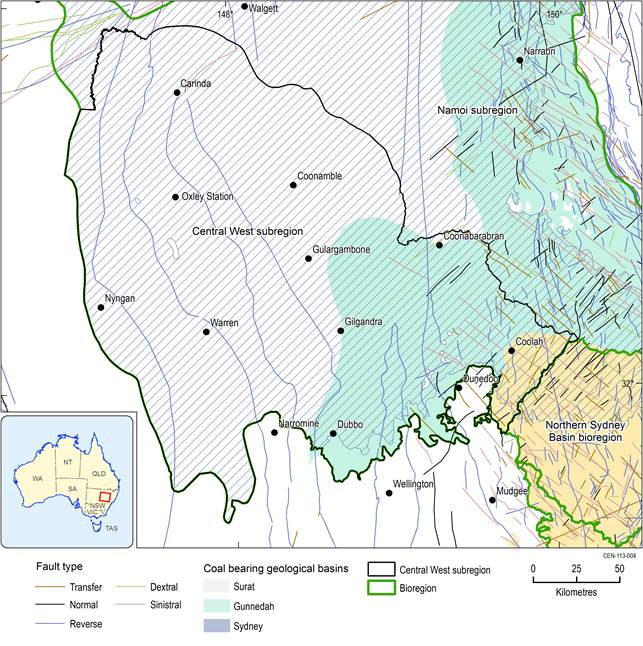