Smithson (2010) describes groundwater levels in the Upper Macquarie Alluvium. This work was undertaken prior to the 2010 La Niña- related floods and key findings include:

Giambastiani and Kelly (2010) analysed 141 bore hydrographs in the Macquarie-Bogan Catchment for long-term trends in standing water level from 1988 to 2008. In the Gunnedah Formation aquifer, depressurisation has occurred in areas with the highest level of abstraction, and the system in these areas has not reached a new equilibrium. Water levels in the Narrabri Formation groundwater system in the southern part of the subregion (around Trangie, Narromine and Gin Gin) show a rising trend over the period of analysis. It is thought that this is due to increased recharge as a result of increased deep drainage from irrigation flow-through (Giambastiani and Kelly, 2010).

Recent measurements (post-2000) of the groundwater level in the alluvial aquifer systems in the Central West subregion are shown in Figure 25. The watertable aquifer shows the same trend as that identified by Skelt et al. (2004), with the groundwater level decreasing to the north and north-west, parallel to topography. 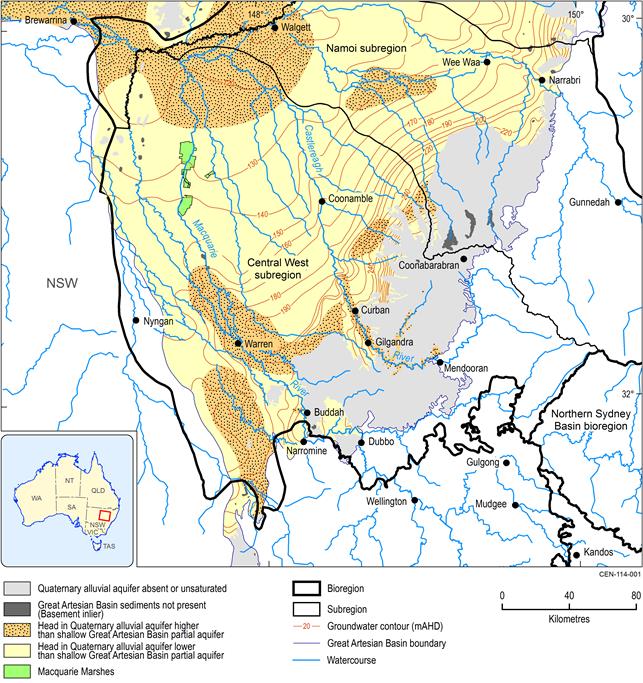 Skelt et al. (2004) summarise the recharge and discharge characteristics of the alluvial aquifer systems in the Central West subregion. Recharge is seasonal and episodic. It is dominated by flood recharge, especially in the lower reaches of the streams associated with alluvial aquifers. Volumes are dependent upon the nature of the material directly above the watertable and the frequency and intensity of flooding.

No information is available on groundwater levels in the Cenozoic Basalts. However, it is expected that these would be local flow systems, with groundwater flow generally following surface elevation contours, and providing baseflow to local streams and leakage to underlying aquifers of the Gunnedah-Oxley and Surat basins.

Due to the nature of the basalt groundwater systems, recharge occurs across the landscape. Discharge occurs locally as seepages where geological changes impede flow paths, or topography changes significantly. Where streams incise this aquifer system, the basalts may contribute to baseflow (Skelt et al., 2004).

Figure 26 is modified from the regional potentiometric surface developed for the Surat Basin by Kellett et al. (2012) as part of the Great Artesian Basin Water Resource Assessment. The surface was developed using all available groundwater data and shows that the groundwater in the uppermost GAB units flows from south-east to west and north-west. Generally, the watertable aquifer in the Coonamble Embayment lies within the Drildool and Keelindi beds (adjacent to the southern boundary of the GAB) north-west to Warren, and then into the Rolling Downs Group. The watertable tends to be topographically controlled. Within the confined aquifer systems of the Surat Basin in the subregion, groundwater flow is to the north and west, driven by recharge in the southern and eastern margins of the subregion. In the area around Carinda and the Bogan River, mound springs occur, as do flowing bores basinward from Coonamble (Brownbill, 2000). Potentiometric surface mapping for the uppermost unit of the GAB in the Central West subregion shows flow to be from the intake beds towards the west and north-west, trending more northerly toward the Surat Basin (Figure 26). 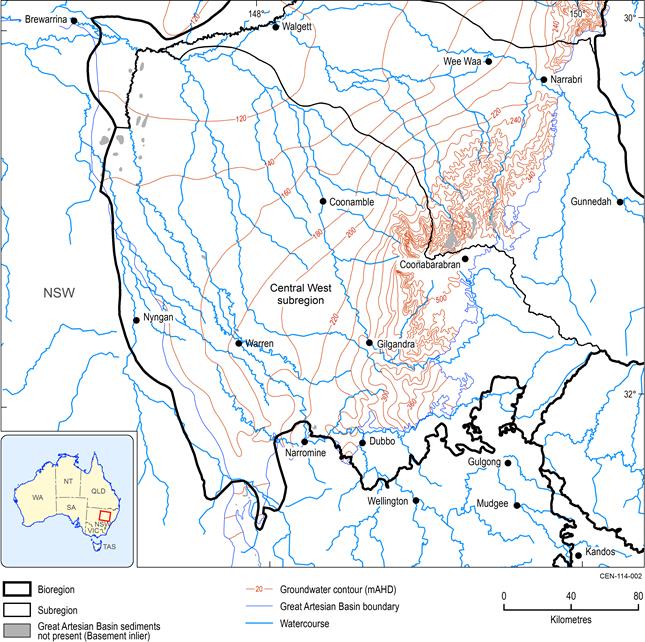 Generally this is the Rolling Downs Group, but in the southern and eastern parts of the subregion may be the Drildool beds, Keelindi beds or Pilliga Sandstone.

Information relating to groundwater levels and flow for the Gunnedah Basin in the Central West subregion is only available from EMGA Mitchell McLennan Pty Ltd (2012). Data for this study are limited to the area adjoining the southern boundary of the subregion, approximately 40 to 70 km east of Dubbo. This indicates that flow is influenced by stratigraphic dip, aquifer depth and structural architecture. Generally, flow is to the north and north-west. Groundwater levels range from about 450 mAHD to about 340 mAHD adjacent to the Talbragar River, which are lower than the GAB potentiometric levels in the region of about 400 to 300 mAHD where GAB aquifers are present in this area. The limited spatial extent of the data used to derive this information affects the ability to extrapolate outside the Cobbora Project Area.

As outlined in preceding sections, while the alluvium in the subregion is typically separated in literature into the overlying Narrabri Formation and underlying Gunnedah Formation, the contact between them is lithologically difficult to determine in places and some authors question the validity of this separation. Some degree of hydraulic connectivity is reported between the aquifers of both formations (e.g. Giambastiani and Kelly, 2010), with leakage from the Narrabri Formation cited as a potential source of recharge to the Gunnedah Formation aquifers.

Intense weathering of exposed GAB rocks prior to deposition of overlying alluvium resulted in development of a basin-wide saprolite layer (Kellett and Stewart, 2013). The base of the saprolite has low permeability, which is considered to reduce connectivity with overlying hydrostratigraphic units. In some places the saprolite has been removed by erosion making hydraulic connection possible (Kellett and Stewart (2013). Such areas occur beneath paleochannels, of which there are reportedly many in the Surat Basin, which commonly occur beneath or adjacent to modern stream channels. Depending on the relative head levels between the alluvium and GAB, there may be upward or downward flow of water in these areas (Figure 25, Figure 26).

In the Central West subregion, Kellett and Stewart (2013) indicate that areas where downward flow of water from the alluvium to the underlying GAB are likely to include:

It is emphasised that relative hydraulic heads and thus potential flow directions are not fixed and can change in response to stresses such as groundwater extraction (e.g. for irrigation or coal seam gas development). 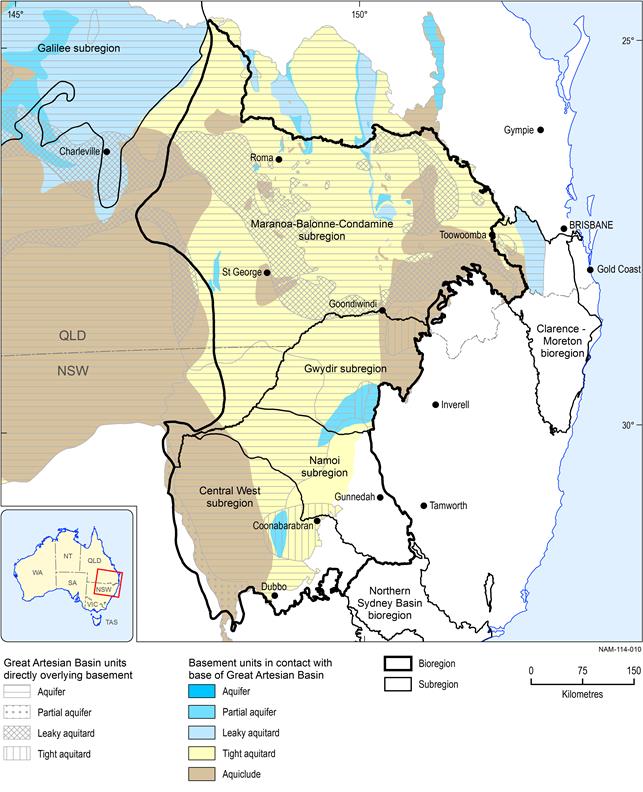 A comprehensive multi-disciplinary study of the Macquarie Marshes by Macaulay and Kellett (2009) showed that the marshes are connected to the shallow alluvial groundwater system. This system is hosted within the Quaternary sediments of the Lower Macquarie Alluvium. Previous work described in the study identified the potential for GAB aquifers to provide water to the marshes, due to artesian conditions being recorded in bores in the area. Macaulay and Kellett (2009) state that this would require a conduit linking the Pilliga Sandstone aquifer to the Cenozoic sediments, through several hundred metres of intervening Rolling Downs Group, Drildool beds and Keelindi beds. Macaulay and Kellett (2009) showed, based on three-dimensional geophysical mapping, that a thick, continuous saprolite layer separates the Macquarie Marshes from the Pilliga Sandstone. This layer, interpreted as highly weathered Rolling Downs Group, acts as an impermeable barrier, blocking upward leakage from the Pilliga Sandstone. No potential conduit for upward leakage was identified. Geochemical sampling also highlighted that the water in the shallow alluvial system associated with the Macquarie Marshes was distinct from GAB waters, as well as being much younger than would be expected if GAB waters were contributing to the system.