The Macquarie, Castlereagh and Bogan river basins covers an area of approximately 85,000 km2 and is home to approximately 185,000 people. It contains a large variety of vegetation, landforms and communities, including 82 broad vegetation types that provide habitat for over 550 vertebrates (Central West CMA, 2011a). Many species and communities are listed as threatened or endangered (Central West CMA, 2011b). Land use in the Macquarie-Bogan river basin is dominated by extensive agriculture with over 80% of the river basin being used for grazing, 9% for dryland cropping and 5% for forestry, conservation and other native landscapes (Green et al., 2011). More information on land use is provided in Section 1.1.2.2.3 .

Broadly speaking, the Macquarie, Castlereagh and Bogan river basins can be subdivided into three areas in an east to west direction: the central west tablelands, the central west slopes and the central west plains. This broad gradation depicts regional scale changes in landforms and climates. The central west tablelands, which are mostly upstream from the subregion, generally have an elevation of between 450 and 1000 m. The topography through this area is mostly undulating to hilly and there can be significant variation in soils over very short distances. Soils are mostly derived from sandstone granite shale/slate and basalt parent materials (Central West CMA, 2008c).

The slopes area lies west of the tablelands area at lower altitudes of between 250 and 700 m above sea level. The topography ranges from steep hills to gently undulating landscapes and alluvial river plains. The geology is based on a series of faults and folds of sedimentary parent material in the southern part of the area, interspersed with granite intrusions and basalts from old volcano and overland flows. The northern part of the slopes region is made up of the southernmost edge of the Great Artesian Basin. Soils range from highly fertile alluvium and basalts to deep sands of the Pilliga Sandstone. Soil salinity is a major issue, particularly in the Talbragar and Little river basins (Central West CMA, 2008b).

The plains area lies to the west of the slopes area. This area consists of broad flat plains with occasional rocky outcrops, and occurs between 150 and 300 m above sea level. The plains are dominated by lower rainfall semi-arid rangelands, and the western portion is characterised by braided channels and associated floodplains (Central West CMA, 2008d).

Prior to European settlement the subregion supported a complex mosaic of forests, temperate and semi-arid woodlands, wetlands and grasslands (Green et al., 2011). Subsequently much of the natural vegetation has been cleared for livestock production and intensive agriculture (Central West CMA, 2009). The Central West subregion is comprised of five Interim Biogeographic Regionalisation of Australia (IBRA) bioregions (NSW Government, 2011, Figure 35). The Darling Riverine Plains and Brigalow Belt South IBRA bioregions dominate the Central West subregion, primarily associated with the Gunnedah Lowlands and Mitchell Slopes, respectively (Figure 6). Smaller areas of the Sydney Basin IBRA bioregion (on the Merriwa Plateau) and the NSW South Western Slopes IBRA bioregion and Cobar Peneplain IBRA bioregion (associated with the Gunnedah Lowlands) also occur in the south of the subregion. Brief descriptions of the characteristics of these IBRA bioregions are shown in Table 17.

The Central West subregion contains several areas of national and international significance. These include:

The South Eastern Highlands IBRA bioregion is upstream from the Central West subregion. 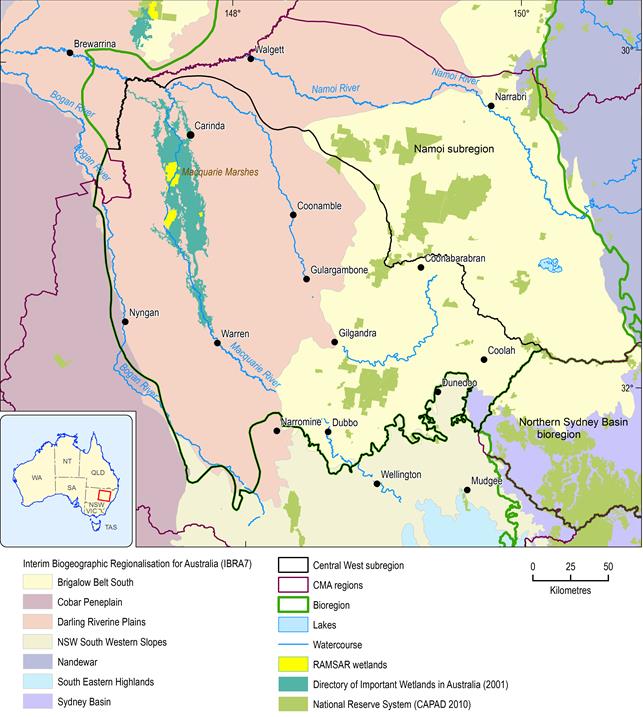