The spatial configuration of the system boundaries is represented by sustainable diversion limits (SDL) resource units which are shown in plan view in Figure 22. Smithson (2010) provides hydrogeological cross‑sections across the Upper Macquarie river basin within the subregion, providing representative context for the alluvial aquifer systems. Appendix A of EMGA Mitchell McLennan Pty Ltd (2012) provides conceptual hydrogeological cross‑sections of the area surrounding the proposed Cobbora coal mine, which provide context for the Gunnedah Basin system and interactions with the alluvial system. The geological basin boundaries for the Surat and Gunnedah basins are shown in Figure 16. 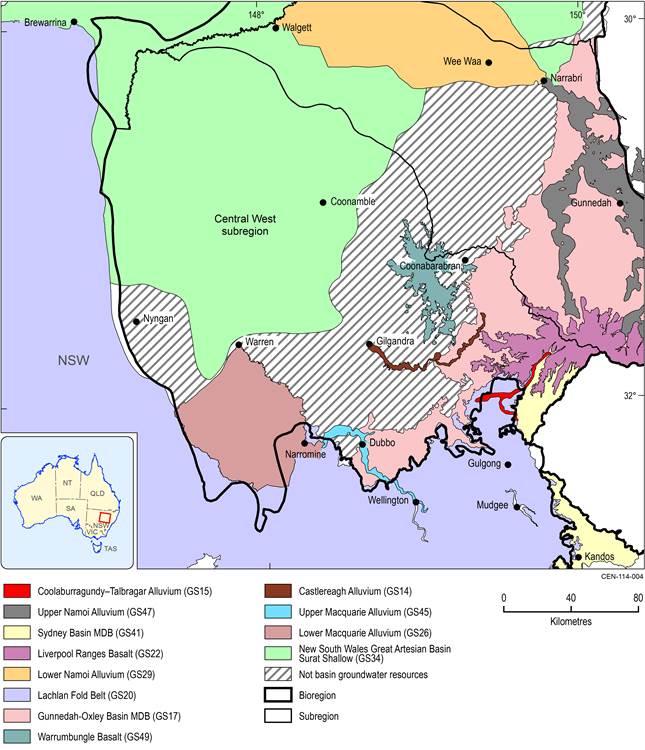 Figure 22 Map of groundwater systems represented by groundwater sustainable diversion limit resource units for the Basin Plan 2012, made under the Water Act 2007

The area shown as ‘Not basin groundwater resources’ corresponds to areas of Pilliga Sandstone outcrop and subcrop.

The alluvial aquifers of the Macquarie river basin are the main groundwater sources for irrigation and town supply in the subregion. The ‘Upper Macquarie’ Alluvium extends from Wellington downstream to Brummagen Creek (between Dubbo and Narromine, Figure 22). The ‘Lower Macquarie’ Alluvium extends downstream from this point to Warren, and spans the area between the Macquarie and Bogan rivers. Significant alluvial aquifers are also associated with the Castlereagh and Talbragar rivers (Figure 22, Figure 25).

Alluvial aquifers extend to depths of up to 160 m below the Lower Macquarie River downstream of Narromine (Macaulay and Kellett, 2009), and to lesser depths in other catchments and upstream areas. The deepest parts of the alluvial aquifer system are coincident with the Southern Paleovalley of Macaulay and Kellett (2009), which underlies the lower slopes and plain of the Lower Macquarie and Bogan rivers between Narromine and Dandaloo. These paleovalley sediments have been found to be Pliocene in age (Macphail, 2008), and are equivalent to the Gunnedah Formation. Upper (Quaternary) and Lower (Neogene) units have been identified in the main deposits of the Upper Macquarie River downstream of Wellington (Smithson, 2010) and also within the Lower Macquarie river basin (Giambastiani and Kelly, 2010). The Murray–Darling Basin Authority (MDBA, 2012) refers to these units as the Narrabri and Gunnedah Formations respectively (in accordance with the geology of the Namoi valley to the north), but this nomenclature is not universally accepted. Smithson (2010) provides cross-sections of the Upper Macquarie Alluvium for a variety of locations. Downstream of Narromine, Quaternary deposits can be divided into four formations (Macaulay and Kellett, 2009), comprising the Marra Creek, Bugwah, Carrabear, and Trangie formations. The Gunnedah Formation is the main alluvial aquifer, while aquifers also occur within coarser-grained units of the Narrabri Formation (including the Bugwah and Carrabear Formations in the Lower Macquarie river basin). Across much of the Central West subregion, the alluvial units unconformably overlie units of the Surat Basin, except toward the south-eastern boundary, where they overlie the Gunnedah-Oxley Basin.

The Warrumbungle and Liverpool ranges basalts were formed during the Miocene and Eocene by shallow igneous activity. They locally intrude and overlie the Surat and Gunnedah-Oxley basin strata as volcanic plugs and dikes, and also as lava flows. They contain minor, fractured rock aquifers (Figure 22).

The Surat Basin occupies approximately 300,000 km2 of south-eastern Queensland and north-central NSW (Kellett et al., 2012). It directly overlies the Gunnedah Basin in the east of the Central West subregion, and the Lachlan Fold Belt in the west. The Surat Basin strata occupy the Coonamble Embayment component of the GAB, and range in age from Late Triassic to Early Cretaceous (Kellett et al., 2012). Strata crop out in the central part of the subregion, are largely buried by Cenozoic alluvial sediments in the west, and are absent in the east.

The ‘Oxley sub-basin’ is not formally recognised in literature, but consists of an extension of Pilliga Sandstone in the south-east of the Surat Basin that is hydraulically separated from the rest of the Surat Basin by a groundwater divide. Maps by both Schlumberger Water Services Australia (2012) and the NSW Office of Water (2012) indicate the Oxley sub-basin cropping out in the Central West subregion in the area between the Warrumbungle and Liverpool range basalts. MDBA (2012) presents the Oxley sub-basin as disconnected units within the Upper Macquarie and Upper Castlereagh catchments.

The Gunnedah Basin directly overlies fractured rocks of the Lachlan Fold Belt and contains up to 1200 m of marine and non-marine Permian and Triassic sediments within which the coal-bearing strata of the Black Jack Formation and the Maules Creek Formation occur (Schlumberger Water Services Australia, 2012). Strata are exposed in the eastern part of the region, occur at depth beneath the Surat Basin in the central parts, and are absent in the west (NSW Government, 2013c).

The Triassic Napperby Formation marks the top of the Gunnedah Basin in this subregion. This is underlain by the Digby Formation, which overlies the Dunedoo Formation. The basal units are the Goonbri and Leard formations. Where these are not present, the coal-bearing Maules Creek Watermark and Porcupine Creek Formations are the basal units (Schlumberger Water Services Australia, 2012; EMGA Mitchell McLennan Pty Ltd, 2012).

The main hydrogeological units identified in the north-western part of the Sydney Basin are the Quaternary alluvium, Cenozoic paleochannel deposits, Triassic Narrabeen Group sediments, Permian coal measures and the basal units of the Early Permian Shoalhaven Group, Nile sub-group and Marrangaroo Formation (RPS Aquaterra, 2011). The principal aquifers are associated with the Permian sediments, including the Ulan coal seam, and within some parts of the Cenozoic paleochannel deposits. The Triassic Narrabeen Group and weathered granite basement also provide some groundwater resource potential. The Shoalhaven Group sediments and Quaternary alluvium are considered to contain only localised aquifers with minor groundwater potential (Mackie Environmental Research, 2009; RPS Aquaterra, 2011). 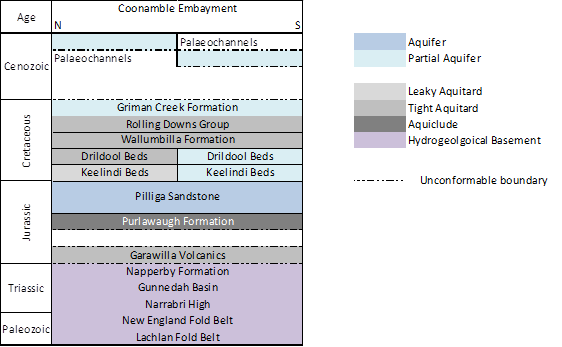 Figure 23 Hydrostratigraphic relationships in the Surat and Gunnedah basins

Groundwater monitoring is undertaken by the NSW Government for priority groundwater systems – primarily the major alluvial aquifers. Figure 24 shows the distribution of all bores from the National Groundwater Information System (NGIS) dataset (Bureau of Meteorology, 2013) with at least one water level measurement, overlain by the subset of those bores that have more than two water level readings between 1 January 2008 and 20 February 2013. It is apparent from the distribution of monitoring bores that the focus for monitoring is on alluvial aquifer systems.

Monitoring networks also exist in the Lower Macquarie catchment and the Macquarie Marshes area in the north of the subregion.

The NSW Government also undertakes monitoring in the GAB. The NSW Office of Water (2009) states that over 500 artesian bores in the NSW portion of the GAB Groundwater Source have been monitored for pressure, flow, temperature and groundwater quality. However, monitoring has been discontinued in many bores as they were decommissioned, became sub-artesian or were assessed as unsuitable for monitoring due to the poor condition of the bore head. The NSW Office of Water (2009) indicated that 65 of these GAB bores were being monitored at least once every two years. A subset of this network occurs in the Central West subregion.

Groundwater assessment is undertaken by NSW Government for priority groundwater systems, such as the Upper Macquarie alluvial aquifers (e.g. Smithson, 2010), to support local planning requirements and the development and amendment of water resource sharing plans. Data collection and assessment has also been undertaken to support strategies such as the Great Artesian Basin Sustainability Initiative and by industries to meet the requirements of individual development proposals and operational conditions. 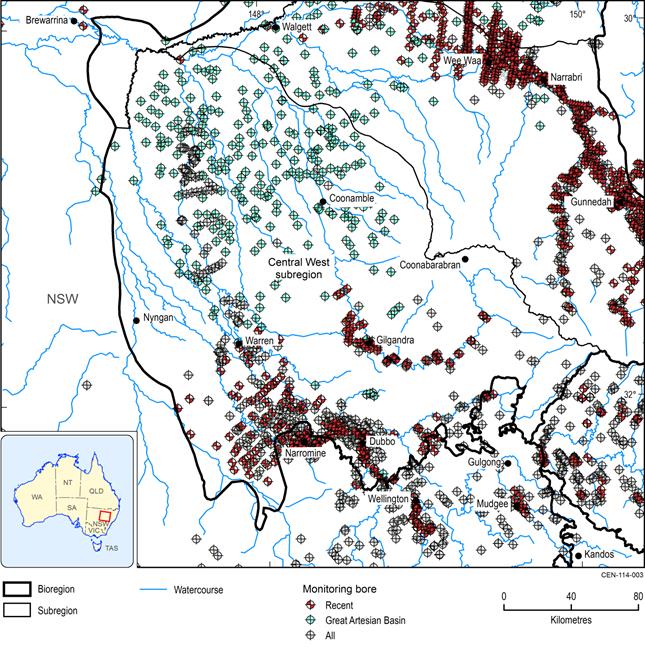