The Goonbri Formation is an Early Permian lake deposit characterised by a coarsening-upward sequence. The lowermost section is dark, massive siltstone, the central section is interbedded fine-grained sandstone and siltstone, and the uppermost section is fine- to medium-grained sandstone (Etheridge, 1986; Australian Stratigraphic Units Database, 2013). Thin coal seams are present in this unit (Australian Stratigraphic Units Database, 2013).

The Pamboola Formation consists of sandstone, siltstone, claystone, conglomerate and coals (Australian Stratigraphic Units Database, 2013). A distinctive sub-unit, the Melvilles Coal Member, is a high quality and thick coal seam that covers a large portion of the basin (Hamilton, 1985). It is thickest in the east of the basin, up to 3.5 m, but thins towards the western boundary (Hamilton, 1985). In the south-east, this seam splits into two (Hamilton, 1985). This unit forms part of the Brothers Subgroup in the Black Jack Group (Australian Stratigraphic Units Database, 2013).

This coal unit varies from 2.4 to 18 m thick (Hamilton, 1985). It formed in a lagoonal and swamp environment, and is composed of coal and carbonaceous siltstone (Beckett et al., 1983; Hamilton, 1985). This formation is part of the Coogal Subgroup of the Black Jack Group (Australian Stratigraphic Units Database, 2013). 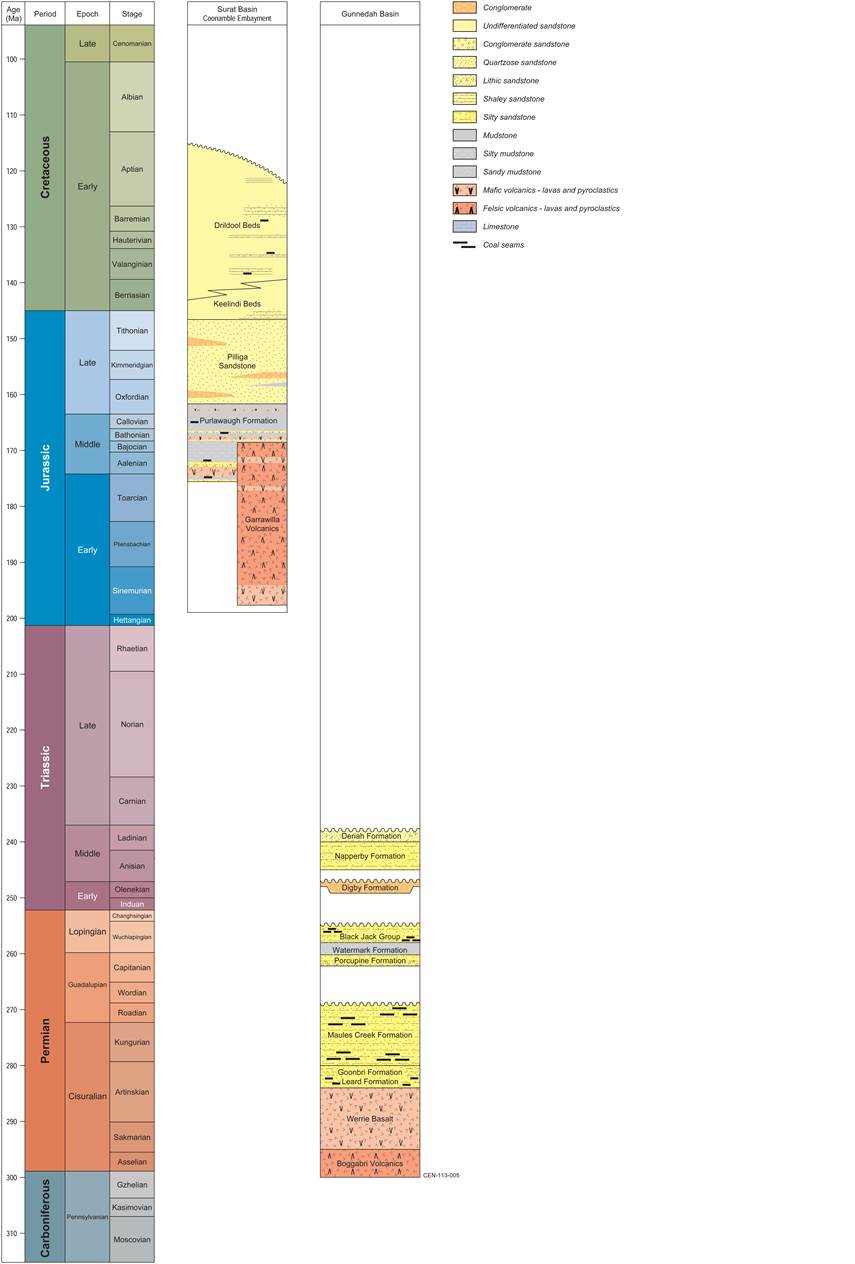 The stratigraphy of the Surat Basin varies across its 300,000 km2 area. Distinct lithostratigraphic packages are defined for the main structural domains of the basin. The rock units defined for the southern NSW part of the Coonamble Embayment (Figure 20) differ from those in the better-known Queensland part of the Surat Basin. In particular, coal-bearing formations in the Coonamble Embayment are less common and markedly thinner than in Queensland. For example, the Walloon Coal Measures do not occur in this area, and the stratigraphic correlative, the Purlawaugh Formation, contains only thin coal seams that are uneconomic. Only minor coal-bearing units occur in the part of the Surat Basin that is in the Central West subregion.

A Jurassic unit composed of largely quartzose sandstone and conglomerate but with a minor amount of interbedded mudstone, siltstone, shale, fine sandstone and coal, however carbonaceous fragments are common (Arditto, 1982; Herczeg, 2008; Australian Stratigraphic Units Database, 2013). The Pilliga Sandstone is an important aquifer unit within the Coonamble Embayment region (Herczeg, 2008).

The Permian to Triassic rocks in the Sydney Basin are a compositionally mixed assemblage of sandstone, siltstone, conglomerate, shale, claystone, tuff and coal (Mayne et al., 1974). The stratigraphy of the Sydney Basin is shown in Figure 21. Detailed stratigraphic description of all rock units within the Sydney Basin is beyond the scope of this report. However, a brief summary of the main coal-bearing units of the northern portion of the basin is provided below.

The Maitland Group is a unit with fewer subdivisions than the Greta Coal Measures, but one in particular is noted as containing up to eight coal seams: the Mulbring Siltstone (Harrington et al., 1989). 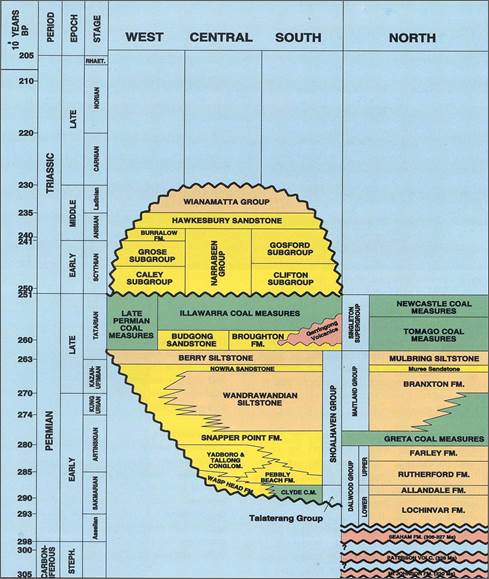 The youngest geological units in the Central West subregion are Cenozoic volcanic rocks, and alluvial to lacustrine sediments associated with modern rivers and paleovalleys. The dominantly mafic lavas and pyroclastic rocks of the Warrumbungle Volcanics have a restricted spatial distribution within about 40 km west and south-west of Coonabarabran. The basaltic Liverpool Range Volcanics occur only in the far east of the subregion. Both of these units were formed from localised volcanic eruptions during the Eocene (Liverpool Range Volcanics) and Miocene (Warrumbungle Volcanics), and locally intrude and overlie the Surat and Gunnedah basin strata.

The near-surface alluvial sequences of the main rivers and paleovalleys in the Central West subregion (which include the Macquarie, Castlereagh and Talbragar rivers) form important aquifer systems and are further discussed in Section 1.1.4 (hydrogeology). However, as the Cenozoic volcanic rocks and alluvial sediments do not contain any economic coal resources, they are not further discussed in this section.