The surface water system of the Central West subregion is based on the Macquarie, Castlereagh and Bogan river basins (Figure 28). The full extent of these river basin areas is shown in Figure 5 (Geography chapter, Section 1.1.2.3). A relatively small area of the Marra Creek catchment in the Barwon-Darling basin, that is not part of the Macquarie river basin, also contributes to the surface water of the subregion. Catchment areas for the upper reaches of the Macquarie River (upstream of Dubbo) and the western side of the Bogan River are outside the subregion. 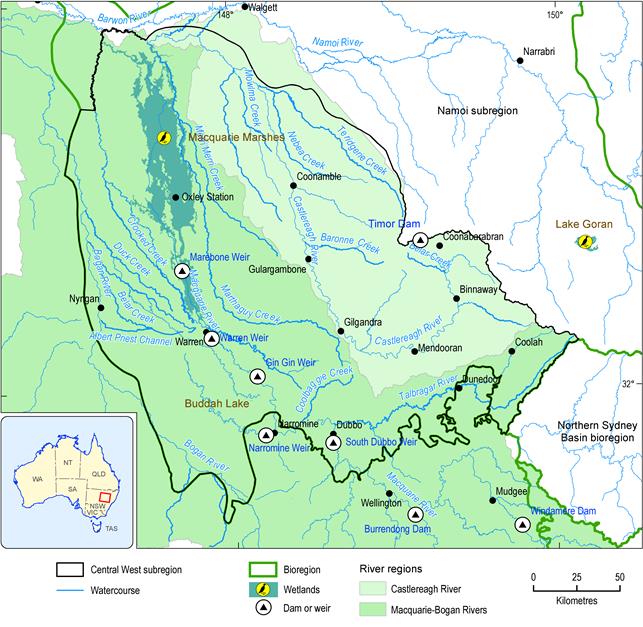 This report deals with surface water related to the Macquarie, Castlereagh and Bogan rivers within the subregion only. The total combined basins of these three rivers contribute about 8.4% of the total runoff in the Murray–Darling Basin (CSIRO, 2008).

The Castlereagh River (about 540 km long) rises in the Warrumbungle Ranges and flows through Coonabarabran before entering hilly country. The river then flows through Binnaway, Mendooran, Gilgandra, Gulargambone and Coonamble and joins the Macquarie River downstream of the Macquarie Marshes. The floodplain between the Barwon and Castlereagh rivers is intersected by Womat and Wanourie creeks. These creeks carry flows from the Barwon River to the Castlereagh River during major floods (CSIRO, 2008). The annual mean contribution of the Castlereagh River to the Barwon River is 71 GL (Webb, McKeown and Associates Ltd, 2007). The Castlereagh River above Binnaway is regarded as a stressed river because, relative to the natural flows in the creek, the potential demand for extraction by water users is high. If everyone pumped water at the same time, there would not be enough water for all existing water users and the environmental needs of the river (DIPNR, 2004a). Restrictions are put in the relevant WSP on total and individual daily extraction limits to restrict access licence holders from taking more than a certain volume of water per day (see, for example, NSW Government, 2014a; NSW Office of Water, 2011).

The headwaters of the Bogan River (about 620 km long), in the Harvey Ranges between Parkes and Peak Hill, are upstream of the Central West subregion. The river then flows north-west through a broad, flat landscape through Nyngan and leaves the subregion about 100 km further downstream. The Bogan River joins the Barwon River just upstream of where the Barwon and Culgoa rivers join to form the Darling River. The annual mean inflow from the whole of the Macquarie-Bogan system to the Darling River is about 888 GL (Webb, McKeown and Associates Ltd, 2007).

The area of the combined drainage basins of the Macquarie, Castlereagh and Bogan rivers is approximately 84,850 km2(CMA CW, 2013), which is much greater than the Central West subregion area (46,735 km2).

The Macquarie is a regulated river (CSIRO, 2008). The major public water storages in the Macquarie river basin are Burrendong Dam on the Macquarie River (1188 GL, completed 1967), Windamere Dam on the Cudgegong River (368 GL, completed 1984) and Chifley Dam on the Campbells River (31 GL, completed 1956), all of which are upstream of the subregion. The Warren and Marebone weirs are the two main weirs in the Macquarie River that are within the subregion. The others are Narromine, Gin Gin, Dubbo City Council, and Dubbo State Water weirs. The total volume of major dams, town water supply dams, weirs and farm storages in the Macquarie river basin is 2530 GL, including 1587 GL of storage in the Burrendong, Windamere and Chifley dams, 264 GL of on-farm hillside dams, 21 GL in weirs and 110 GL in ring tanks respectively (Webb, McKeown and Associates Ltd, 2007). The Macquarie Marshes are estimated to have a storage capacity of 500 GL (CSIRO, 2008).

The Castlereagh is an unregulated river and has no major public water storages (NSW Office of Water, 2012). However there are a number of smaller dams and weirs in the Castlereagh river basin. One of them is the Timor Dam, which is a water supply dam for the town of Coonabarabran (NSW Government, 2006).

The agriculture of the Central West subregion is highly dependent on irrigation. The area of the Macquarie Valley irrigation district – including areas outside of the Central West subregion – is about 13,000 km2. There are seven off-river supply schemes supplying water to different properties in the district (MDBA, 2013). They are the Nevertire, Tenandra, Buddah Lake, Greenhide, Narromine, Trangie-Nevertire and Marthaguy schemes. There are highly developed irrigation areas near Buddah Lake.

The ten-year Macquarie and Cudgegong Regulated River Water Sharing Plan (WSP) commenced on 1 July 2004. Within the Central West subregion, the Plan applies to sections of the regulated Macquarie River from the upper limit of Burrendong Dam to Monkeygar Creek offtake, tributaries of the Bogan River and the Marra Creek (NSW Office of Water, 2014). Some of these regulated water sources include sections of Bulgeraga, Crooked, Bena Billa, Duck and Gunningbar creeks.

The surface water long-term annual extraction limit within the Macquarie and Cudgegong regulated river water source (excluding the Bogan River) under the WSP is 392 GL (NDWE, 2009; NSW Government, 2014b, Appendix 1). Table 13 lists the major surface water entitlements. The share components of the high security, general security and supplementary licences are expressed as a number of unit shares (DIPNR, 2004b). The unit share is the share of water allocated to licence holders as determined by the Available Water Determinations (AWDs) in volume per unit share. AWDs are made under section 59 of the Water Management Act 2000. The volume of water allocated to a water account is calculated by multiplying the number of unit shares on the licence by the volume per share stated in the AWDs (DIPNR, 2004b). AWDs are made for each licence category in each water source and are generally made at the start of a water year.

The Murray–Darling Basin Authority estimates the surface water long-term average baseline diversion limit for the Macquarie-Castlereagh river basin (SS20) to be 734 GL/year (MDBA, 2012). This limit includes 380 GL/year from regulated and major unregulated rivers, and 44 GL/year from minor unregulated rivers (excluding basic rights). The limit on interception by runoff dams is set at 310 GL/year (including 44 GL/year of interception by commercial plantations). The sustainable diversion limit under the Murray–Darling Basin Plan requires that the surface water long-term average diversion limit be reduced from 734 GL/year by 65 GL/ year to meet local environmental targets plus any apportionment of the northern Basin zone shared reduction target set by the Basin Plan. The SDL will come into effect in 2019 following the completion of the northern basin review, the operation of the SDL adjustment mechanism and apportionment of any shared reduction target in 2016, all of which may lead to further reductions in the Macquarie-Castlereagh SDL resource unit.

The Macquarie River floodplain management plan covers an area of 26,000 km2 along the Macquarie River from Narromine to Oxley Station upstream of the Macquarie Marshes (NDECC, 2008). The Burrendong Dam has a significant mitigating effect on minor to medium sized floods within the floodplain management plan area. In the Macquarie River, flooding is confined within the river banks upstream of Narromine. However much of the flow of large flood events leaves the river and flows through several shallow lakes and natural depressions in the reach between Narromine and Gin Gin. The overflows from the left bank, however, are restricted to a narrow floodplain due to the land elevation (NDECC, 2008). The floodplain below Gin Gin is considerably wider. Figure 28 shows the distributed channel network downstream of Warren through which flood waters enter different creeks, including the Marra Creek.