A model of subtidal benthic communities focused on the factors and processes regulating the production of seagrass, its associated biota, and the productivity of adjacent soft-sediment habitats (Figure 30). The growth of seagrass (SG) was described as being strongly controlled by available light (Lig), which can be reduced as a function of water depth or turbidity (Tur) (Hemminga and Duarte, 2009a). Seagrass growth can also be suppressed due to high wave energy (WE&D), excessive accretion of sediments (SA) and, in areas adjacent to power plants, discharges of hot water plumes (HWD) (Hemminga and Duarte, 2009c). Where levels of light are relatively high, shallow-water species of seagrass outcompete seagrass of the genus Halophila (Hal), but with increased water depth and reduced light penetration, seagrass beds are composed exclusively of Halophila spp. (Rasheed et al., 2014). Relatively little living seagrass is directly consumed by grazers, however, swans (Swa) can be an important consumer of seagrass (Choney et al., 2014).

The growth of epiphytes and their associated epifauna (EP&EF) can limit growth of seagrass by directly covering and shading seagrass leaves from light, especially if nutrients are plentiful (Hays, 2005). Their growth can be controlled by epiphytic grazers, which in turn are an important resource for juvenile fishes (Gacia et al., 1999). There is also an invertebrate community (IC) associated with seagrass beds that supports juvenile fishes and populations of syngnathids (Dickinson et al., 2006). Seagrass beds are key to the survival of juvenile fishes due to the refuge they provide from predators (Jelbart et al., 2007).

Seagrass beds contribute to the stores of fines and organic matter (F&OMS). The stores of fines and organic matter are the principal resource of infauna communities, which can play an important, though uncertain, role in regulating the levels of nutrients from sediments (i.e. dashed-line link in Figure 30). Where infauna (Inf) facilitate the release of ammonia they also increase the relative amount of nutrients released from sediments (Herbert, 1999). It was hypothesised that infauna can also act to suppress the release of phosphorus via facilitating its bonding to iron oxides. If this effect is strong, and if phosphorus is a limiting nutrient, then infauna could have a negative influence of nutrient releases from surface sediments. Decomposition of organic matter can also create high levels of sulfides in surface sediments that can suppress the growth of seagrass (Hemminga and Duarte, 2009b).

In addition to the uncertain relationship between infauna and the release of surface nutrients, there was uncertainty as to whether juvenile fish could effectively control populations of grazers over soft sediments, and if epiphytes and epifauna provided a benefit to invertebrate consumers associated with seagrass beds. Soft-sediment habitats between seagrasses are an important and widespread substrate for the growth of microphytobenthos, which are depicted as an important consumer of nutrients from both the water column and from surface sediments, and also an important resource for grazers (Cahoon, 2009) and phytoplankton. These populations of grazers are an important food resource for juvenile fishes, which must venture out of the protection provided by seagrass beds to consume them.

An important physical driver to this system is the entrance efficiency of the estuary (EE), which regulates levels of turbidity (Tur), water column nutrients (WCN), and levels of fines and organic matter stores (F&OMS). River discharge and catchment runoff (RD&CR) contribute to the level of nutrients in the water column, and organic matter exported from intertidal habitats (i.e. saltmarsh vegetation, intertidal seagrass vegetation, mangrove vegetation and associated microphytobenthos) constitutes a major input of organic matter to the subtidal system. The impact of subsidence (Sub) from underground longwall mining is depicted as a local increase in depth (Dep). 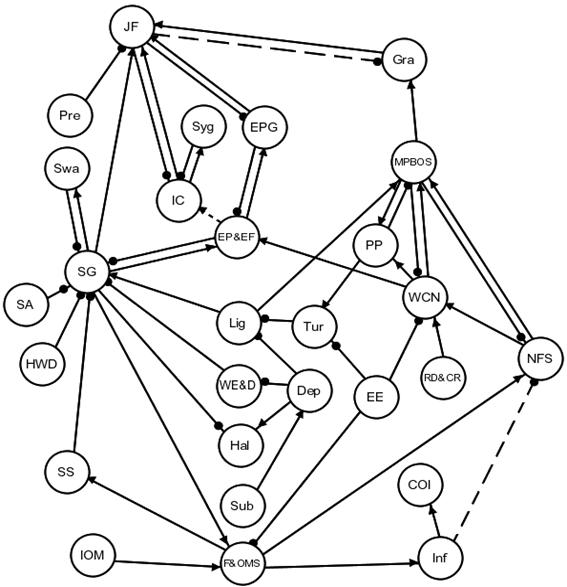 The qualitative model for subtidal benthos shows that seagrass can be sensitive to subsidence resulting from underground mining, as increasing the depth of water above the seagrasses (through base-level lowering) results in reduced light penetration. Modelling subsidence was not within the scope of the bioregional assessments and has not been predicted. As previously noted, the Wallarah 2 and Mandalong Southern Extension mines are not under coastal lakes and will not cause subsidence under the coastal lakes; and the Chain Valley extension, which will be under a part of Lake Macquarie, does not involve extraction within the high-water-mark subsidence barrier.

A quantitative model of the subtidal benthos was not progressed because their degree of groundwater dependence could not be determined and hydrological changes from underground mining were not considered a risk to this ecosystem.