A qualitative model for intertidal wetlands was developed based on the processes that regulate production of organic matter in saltmarsh, seagrass and mangrove habitats, and their importance to fish and migratory bird populations (Figure 29). The seagrass (SG) node in the intertidal wetlands model provides an important link to the seagrasses in the subtidal benthos model (Section 2.7.5.3), reflecting the fact that saltmarsh, seagrass and mangrove occur in broadly the same habitat (coastal lakes and lagoons) but, within which, their distributions are controlled by water level depth and fluctuations.

In the intertidal wetlands model, mangrove forests (M) and saltmarshes (SM) are recognised as providing numerous and similar ecosystem functions (e.g. carbon sequestration, filtration, basal habitat for terrestrial ecosystem), but saltmarshes are likely to be the preferred roosting habitat for migratory wading birds (MWB). Both generally benefit from any net increase in sediment accretion (NSA), although sedimentation may eventually convert saltmarsh into supra-tidal floodplain (Saintilan et al., 2009). A naturally fluctuating tidal cycle (TC), dependent on estuary entrance (EE) conditions, may control the interaction of saltmarshes and mangrove forests (Saintilan et al., 2009). Salinity (Sal) may also act as a regulating variable in the competitive interaction between mangroves and other habitat types, where higher salinity levels favour saltmarsh vegetation at the expense of mangroves, owing to the tolerance of saltmarsh plants to hypersaline conditions (Adam, 1990).

Submerged saltmarsh and mangrove vegetation provide substrate for the growth of microphytobenthos (MPB) communities, and are an important source of nutrient-rich organic matter (OM) to support secondary production (Connolly, 2009). Inputs of detritus from terrestrial vegetation (TV), as well as seagrass (SG), also contribute to the stores of organic matter in the system. These stores provide the basis for production of communities of infauna and epifauna (I&E), which in turn are a critical food resource for numerous fishes (Fis) and migratory wading birds (MWB) (Connolly, 2009; Spencer et al., 2009). The latter seek feeding areas adjacent to suitable roosting habitat and also benefit from open areas with standing pools (OA&PH) as a refuge from predation. The pools in these open areas are a key habitat for production of insects (e.g. mosquitoes; Dale and Breitfuss, 2009), which are a main food resource for populations of insectivorous bats (B). The larvae of many invertebrate species (IL), especially crab larvae, are dependent on saltmarsh and mangrove habitats for both habitat structure and food resources, and in turn are a key resource for many species of fish (Connolly, 2009). The quality of roosting habitat and the open-area habitat can be compromised by replacement of saltmarsh by mangroves (Spencer et al., 2009). 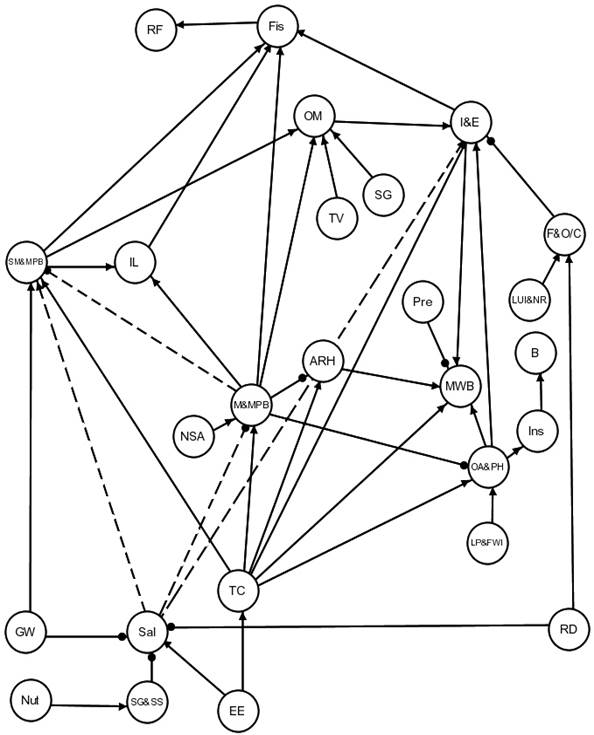 River discharge (RD) can act to increase the fine-to-coarse sediment ratio, which can alter the species composition of benthic macroinvertebrates (Coleman et al., 1978). High inflows of river discharge and groundwater can decrease salinity of intertidal areas, but at a local level, groundwater favours saltmarsh vegetation by maintaining the elevation of the marsh (Rogers and Saintilan, 2008). A local effect of a semi-enclosed water body next to the shore was described as being produced where there was a steep beach profile along a shoreline that was also coupled with dense growth of seagrass beds due to high nutrient levels. In such situations there can be a lack of hydraulic flushing, and local inputs of groundwater can create a long-lasting drop in salinity along the shore, which can impact adjacent saltmarsh and mangrove forest communities.

There were several uncertainties in the model structure (dash-lined links in Figure 29), with the effect of salinity possibly being either positive or negative to infauna and epifauna or to saltmarsh vegetation. The negative effect of salinity on mangroves was also uncertain, and it could also have no effect, or at least be weak enough to have no appreciable effect. The negative effect of mangroves on saltmarsh vegetation was also deemed to be uncertain, and could possibly be too weak to have a significant effect.

The qualitative model for intertidal wetlands includes an interaction between groundwater and saltmarsh. Experts were of the view that groundwater drawdown would result in ‘winners and losers’ in intertidal wetlands. Drawdown would generally favour mangroves, which occupy a lower landscape position than the saltmarsh. Some saltmarsh species could benefit from groundwater drawdown, while others could suffer. Drawdown was thought to be more beneficial than not for infauna and epifauna. Regional groundwater drawdown due to the additional coal resource development is not predicted to extend under Tuggerah Lake, but there is predicted to be a small chance of drawdown under mapped saline wetlands at the Dora Creek inflow to Lake Macquarie, around the Lake Macquarie entrance and on the eastern side of Lake Budgewoi (companion product 2.6.2 for the Hunter subregion (Herron et al., 2018)).

Saltmarsh tolerates less inundation than mangrove, and groundwater extraction can potentially result in subsidence owing to reduced soil volume and more prolonged inundation (Saintilan et al., 2009). However, the subsidence of saltmarsh caused by groundwater removal that has been reported is at the millimetre scale (Rogers and Saintilan, 2008). There is a greater risk from subsidence caused by mining directly under intertidal wetlands, which can submerge saltmarsh and mangroves. It is worth noting, however, that state regulations place restrictions on mining activities (e.g. prohibiting the collapsing of longwall panels) in the near-shore zone of Lake Macquarie and the Tuggerah Lakes to minimise risks to both coastal developments and the intertidal and subtidal communities. In any event, the proposed Wallarah 2 and Mandalong Southern Extension mines are not under the coastal lakes so will not cause subsidence of the lake beds. The Chain Valley extension, which does involve coal extraction from under Lake Macquarie, will not extract within the high-water-mark subsidence barrier, as per current restrictions on mining in these areas.

Development of a quantitative model for the intertidal wetlands was considered low priority and not progressed.