The 23.9 km2 of the ‘Rainforest’ landscape class in the zone of potential hydrological change in the Hunter subregion are nearly exclusively ‘Northern warm temperate rainforests’, which consist of closed forest up to 30 m tall, generally lacking emergents. The canopy is comprised of 4 to 15 species but is dominated by Acmena smithii (lilly pilly), Ceratopetalum apetalum (coachwood) and Doryphora sassafras (sassafras). It occurs in sheltered gullies and slopes in hilly to steep terrain of the coast and escarpment on moderately fertile soils in high rainfall areas, extending above 1000 m elevation, on granites, rhyolites, syenites or sedimentary substrates that yield acid soils with moderate levels of nutrients. It has occasional lianas and epiphytes, an open shrub/sapling stratum and variable fern/herb groundcover amongst copious leaf litter. Mosses, liverworts and lichens may be conspicuous on tree trunks or the forest floor (OEH, 2017d).

A model for rainforest communities (Figure 27) was developed based on a modified version of the model for wet and dry sclerophyll forests (Figure 25). In this system, epiphytic vegetation (EV) in the form of vine thickets are an important component of habitat structure, and trees (Tre), shrubs (Shr) and herbaceous vegetation (Her) provide a key resource to consumers (FC) of fleshy fruits (FF). Omitted from this model are koalas (Koa) and the influence of saline soils (SS) on tree and shrub growth, or associated impacts from land clearing and grazing (LC&G). The influence of groundwater was linked to seedling success, canopy cover and fruit production. 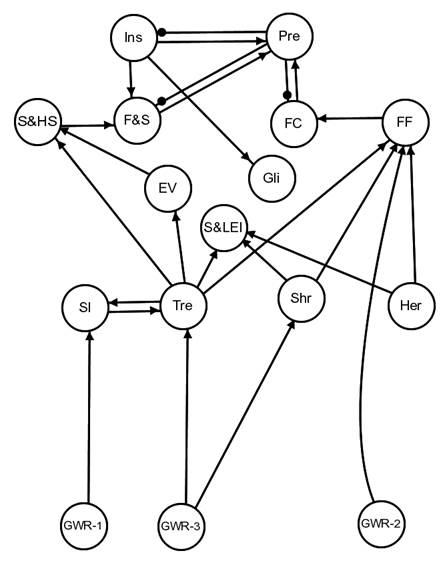 Figure 27 Signed digraph of rainforest communities of the Hunter Valley

Based on the expected location of these rainforests in sheltered gullies and slopes in hilly to steep terrain, experts thought it likely that if this vegetation were using groundwater at all then it would probably use local groundwater (e.g. perched watertables, springs) opportunistically, and this groundwater would not be connected to regional watertables. Thus, no cumulative impact scenarios were developed for qualitative analyses of the model system. However, 10 km2 of the distribution of ‘Northern warm temperate rainforests’ overlaps with the alluvium in the Hunter subregion suggesting that, despite their topographic position, these rainforest communities may have some dependence on alluvial groundwater in some circumstances. The rainforest model presented in this section does not reflect this. The dependence of this landscape class on groundwater, where it coincides with alluvium, is a likely knowledge gap. Note that Dawes et al. (2018) considered that ‘northern warm temperate rainforests’ may depend on both local and regional groundwater (Table 6 in that report). The opinion of the experts at the workshop was that this dependency was more likely to be on local groundwater.