The water requirements of GDEs are poorly understood and there is large uncertainty as to the frequency, timing, life stage and duration of their groundwater use (Andersen et al., 2016). In general, transpiration of groundwater is expected to decline as the depth to groundwater increases, but there is very limited evidence to support this assumption within Australia. O’Grady et al. (2010) reviewed estimates of groundwater discharge in Australia and concluded that there is considerable variation in the relationship between transpiration of groundwater and depth to groundwater. Factors such as the rooting depth of a particular species (which is usually not known), hydroclimatic environment and groundwater salinity all impact on groundwater use by vegetation. Zolfaghar et al. (2014) examined the structure and productivity of eucalypt forest across a depth-to-watertable gradient in the upper Nepean catchment in NSW. They found that where groundwater was shallow, vegetation had significantly higher biomass and productivity than sites where groundwater was deeper than approximately 10 m. The relationships between depth to groundwater and the structural and functional attributes of the vegetation communities were highly non-linear, with steep declines in leaf area index and biomass over a range of 5 to 10 m depth to groundwater. However, it is important to note that the study was largely correlative in nature and did not quantify the groundwater requirements of the vegetation. Specific studies of GDEs within the Hunter subregion are limited. Existing mapping of GDEs is based on a multiple-lines-of-evidence approach that incorporated existing vegetation mapping, modelled groundwater levels and remote sensing (Kuginis et al., 2016). Modelled depths to groundwater (Summerell and Mitchell, 2011) for the subregion are generally shallow (within 16 m of the ground surface). However, there is likely to be uncertainty in the mapping owing to the sparse network of monitoring bores over much of the subregion.

The hydroclimatic environment of the Hunter subregion is subtropical in the eastern part, and bordering on temperate in the western part of the subregion. Average annual rainfall ranges from 600 to 1440 mm/year, with higher values associated with higher elevations and coastal areas. Precipitation is summer-dominated when potential evaporation is also highest (see companion product 1.1 for the Hunter subregion (McVicar et al., 2015)). Hence, the region is classified as being water limited in as much as potential evaporation (1250 to 1950 mm/year) exceeds rainfall in most months of the year. In areas that experience a rainfall deficit, vegetation may be dependent to varying extents on groundwater within the Hunter subregion.

The subregion has three main hydrogeological units (see companion product 1.1 for the Hunter subregion (McVicar et al., 2015)) relevant to sustaining GDE structure and function, which provide a useful conceptual framework for examining landscape classes that are dependent on groundwater:

Alluvial aquifers form in sediments such as gravel, sand, silt and/or clay deposited by physical processes in river channels or on floodplains (Figure 20). These unconsolidated sedimentary aquifers may be layered and/or discontinuous due to the presence of deposits of low permeability silt and clay within the alluvia (Queensland Government, 2013a). Alluvial aquifers are generally shallower than sedimentary and fractured rock aquifers and water levels often fluctuate due to varying recharge and pumping rates (Geoscience Australia, 2016). Alluvia may be underlain by impermeable layers, which separate the unconfined sedimentary aquifer from other groundwater aquifers. Alluvia may support a range of ecosystems (Queensland Government, 2013a). Palustrine (e.g. swamps) and lacustrine (e.g. lakes) wetlands and riverine (e.g. streams and rivers) water bodies on alluvial deposits may depend on the surface expression of groundwater, while terrestrial vegetation may depend on subsurface groundwater that is typically accessed through the capillary zone above the watertable. Unconsolidated sedimentary aquifers in alluvial deposits may also support ecosystems within the aquifer itself, such as stygofauna (Hose et al., 2015).

The alluvial aquifer of the Hunter subregion is considered a regional discharge zone for the aquifers within the region (EPA, 2013), implying an interaction from the groundwater to surface water system through the alluvial aquifer. The connection between the alluvial aquifer and underlying fractured rocks is considered bi-directional (EPA, 2013). Groundwater discharge contributes to baseflow throughout the subregion, but is more persistent in the main Hunter alluvial systems than in the elevated areas, where there is a permanent connection to groundwater. The main recharge mechanisms for the alluvial aquifer are: river leakage to the alluvium (particularly during flooding), direct rainfall recharge and upward flow from Permian fractured rocks (see companion product 1.1 for the Hunter subregion (McVicar et al., 2015)). River leakage is generally considered to be the largest recharge component, and in various modelling studies it has been fitted as up to four times greater than diffuse rainfall recharge (Worley Parsons, 2009; Heritage Computing, 2012).

GDE landscape classes, which are based on vegetation forms from Keith (2004) that are likely to be associated with alluvial aquifers include forested wetlands, and some freshwater wetlands, rainforests and semi-arid wetlands. 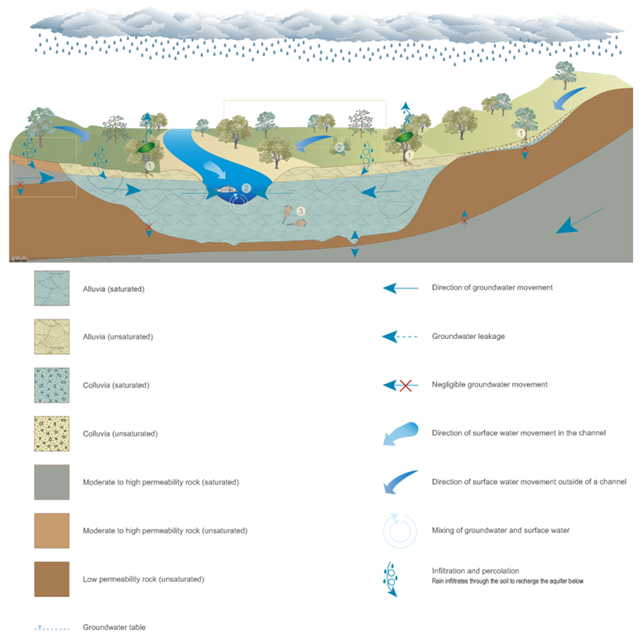 In fractured rock aquifers (Figure 21), groundwater is stored in the fractures, joints, bedding planes and cavities of the rock mass (Geoscience Australia, 2016) and transmitted through fractures within the otherwise low permeability rock (Queensland Government, 2015). Fractured rock aquifers may discharge groundwater into channels, particularly in the lower parts of the landscape. Groundwater diffuse recharge from Permian-Triassic rocks in the Hunter subregion is estimated at less than 2% of annual rainfall, with high values associated with areas of the enhanced regolith permeability.

GDE landscape classes most likely to be associated with fractured rock aquifers include some rainforests, wet and dry sclerophyll forests, grassy woodlands and semi-arid woodlands.

Coastal sands typically support a single, unconsolidated sedimentary aquifer, in which groundwater forms a freshwater lens in the intergranular voids of the coastal sand mass (Figure 22). Perched aquifers may also occur over low permeability layers within the sand mass (Queensland Government, 2013b). Palustrine (e.g. swamps) and lacustrine (e.g. lakes) wetlands and riverine (e.g. streams and rivers) water bodies on coastal sand masses may depend on the surface expression of groundwater from these unconsolidated sedimentary aquifers, while terrestrial vegetation may depend on subsurface groundwater that is typically accessed through the capillary zone above the watertable. Unconsolidated sedimentary aquifers may also support subterranean ecosystems within the aquifer itself, indicated by the presence of stygofauna.

In the Hunter subregion, dunal and/or coastal (of aeolian origin) sands form a highly permeable unconfined aquifer and rainfall rapidly infiltrates through the unsaturated zone to recharge the saturated zone (companion product 1.1 for the Hunter subregion (McVicar et al., 2015)). An example of this is the Tomago Sandbeds, which experiences amongst the highest diffuse recharge rates in the region. Transmissivity has been estimated at between 400 m/day and more than 600 m/day (Crosbie, 2003) with a specific yield of about 0.2. The groundwater level is very responsive to rainfall events, with groundwater level rises over a metre observed on an event basis (Crosbie, 2003).

GDE landscape classes most likely to be associated with coastal aquifers include some freshwater wetlands, forested wetlands, heathlands and rainforests. Estuarine and near-shore marine ecosystems located adjacent to coastal sand masses can also depend on the discharge of groundwater from these unconsolidated sedimentary aquifers; note that the ‘Coastal lakes and estuaries’ landscape group is covered in Section 2.7.5. 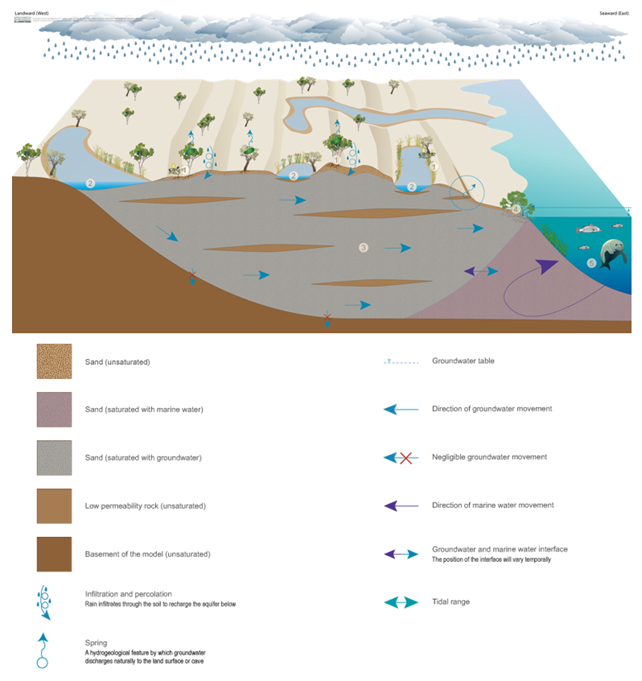 Eight of the nine GDE landscape classes occur within the zone of potential hydrological change (Table 4 in Section 2.7.2). Qualitative models were developed for forested wetlands, wet and dry sclerophyll forests, freshwater wetlands and rainforests, and quantitative models were developed for forested wetlands and wet and dry sclerophyll forests. The qualitative models are described in the following sections. Models were not developed for the small areas of the ‘Heathland’ (0.2 km2), ‘Grassy woodland (0.2 km2) and ‘Semi-arid woodland’ (<0.1 km2) landscape classes within the zone (see Section 2.7.2.3).