A number of mining proposals in the Hunter subregion were identified as additional coal resource developments (as at September 2105) based on the Bioregional Assessment Programme’s definition but not included in the surface water and/or groundwater model simulations. The reasons for not including these developments are discussed in companion product 2.3 for the Hunter subregion (Dawes et al., 2018), and are also provided in Table 45. Figure 77 shows the location of these additional coal resource developments in relation to the zone of potential hydrological change.

Since September 2015, Glencore and Peabody Energy have submitted a joint proposal – United Wambo Open Cut Coal Mine Project (Umwelt, 2016) – which includes a northwest extension to the existing open-cut pit at Wambo and establishment of a new pit between the existing Wambo pit and the Hunter Valley Operations open-cut mine. The potential implications of this development are not considered here. 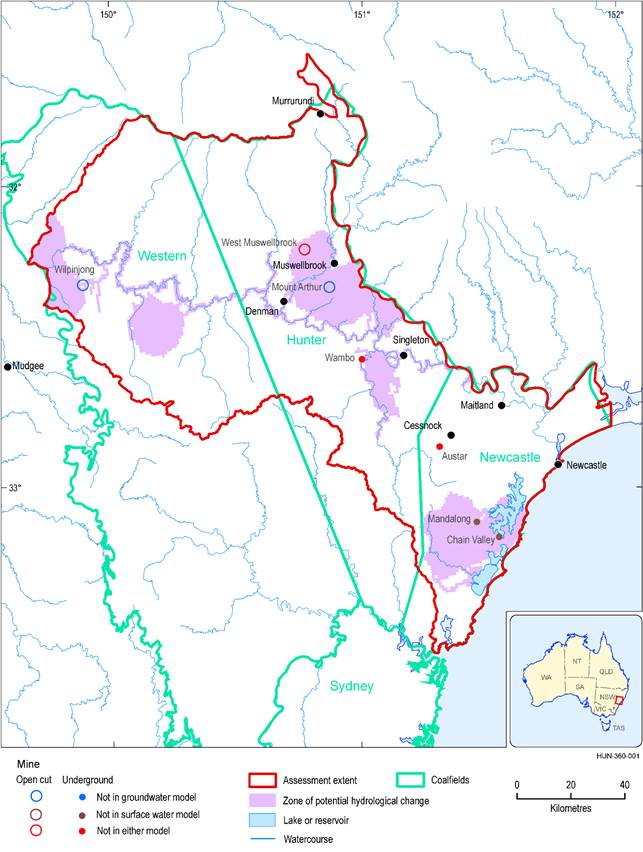 Details of the proposals for a number of the non-modelled and partially modelled additional coal resource developments in Table 45 indicate negligible hydrological changes, and therefore the potential for adverse impacts on water-dependent landscape classes and assets is deemed unlikely. These are the Austar underground, Chain Valley underground and Mount Arthur open-cut proposed developments:

The remaining non-modelled or partially modelled mines in Table 45 could potentially result in hydrological changes off site. The implications on surface water and groundwater hydrology, and in turn landscape classes and assets, from the Mandalong underground, West Muswellbrook open-cut, Wambo underground and Wilpinjong open-cut additional coal resource developments are considered in Section 3.6.2.