3.5.5 Potential impacts on an individual asset

It is not possible to report potential impacts on each of the hundreds of individual assets within the zone of potential hydrological change. Instead, an example is provided using multiple lines of evidence to assess potential impacts on an individual asset – the ‘potential distribution of Malleefowl (Leipoa ocellata)’ (asset number 60766). Malleefowl is the only species in the genus Leipoa and is listed as vulnerable nationally under the EPBC Act. It is also one of only two iconic species (OEH, n.d.) occurring in the Hunter subregion. The asset was assessed as ‘more at risk of hydrological changes’ based on the overlap of the asset with assessment units that are potentially subjected to substantial change in a hydrological response variable that is relevant to the receptor impact model for one or more landscape classes that are associated with the asset.

The malleefowl (Figure 75) is a large (1.5 to 2.5 kg) ground-dwelling bird. It differs from other Australian megapodes (i.e. mound-building birds that do not brood) in that it inhabits semi-arid and arid habitats rather than damp forests. Dry regions are not conducive to the methods typically employed for incubating eggs by other megapodes (Frith, 1956); hence, the malleefowl incubates its eggs by building nests in which moist litter is buried beneath a mound of soil. Nests can be up to 1 m high and 3 to 5 m in diameter. Microbial decomposition of the moist litter is an important source of heat for incubation early in the breeding season but later stages of incubation also rely on heating by the sun. In contrast, other species of megapode use large heaps of rotting litter as nests. 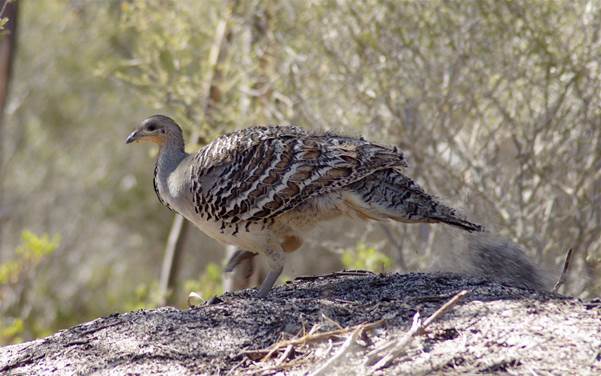 Source: Wikimedia Commons contributors (2017). By butupa (IMGP7721.JPGUploaded by snowmanradio). This figure is covered by a Creative Commons Attribution 2.0 Generic Licence [CC BY 2.0 (https://creativecommons.org/licenses/by/2.0)], via Wikimedia Commons.

The malleefowl once covered much of the southern half of the continent but in southern Australia its distribution has contracted by over 20% since 1981, and the species may now be extinct in the NT (Benshemesh, 2007). It is principally found in shrublands and woodlands dominated by mallee, and associated habitats, but is also found in some Acacia shrublands, mulga and eucalypt woodlands. At the eastern limit of its known distribution, to the west of the Hunter subregion, it is associated with red ironbark (E. sideroxylon) woodland (Korn, 1989). Clearing of the mallee for wheat and sheep production has been the major factor in the decline of malleefowl in southern Australia, although new threats to remaining areas of habitat are emerging, including mining and other land uses (Benshemesh, 2007). Other threats to the malleefowl include predation by foxes, cats and raptors, large fires, disease, inbreeding, chemical exposure and habitat alteration as a result of climate change (Benshemesh, 2007).

The ‘potential distribution of Malleefowl (Leipoa ocellata)’ (asset number 60766) extends beyond the known range of the malleefowl and intersects the westernmost parts of the Hunter subregion, primarily in the Upper Goulburn. The potential geographic extent of this and other species-related assets is based on maximum entropy (MAXENT) modelling that relies largely on physical parameters and past observations of the presence and absence of the species (Elith et al., 2011). There are 296 km2 of ‘potential distribution of Malleefowl (Leipoa ocellata)’ within the zone of potential hydrological change (Table 30). Of this, 267 km2 were classified as non-GDE vegetation that would not be affected by hydrological changes, while 0.74 km2 was classified as wet or dry sclerophyll forest and 0.02 km2 was classified as forested wetland that could be sensitive to hydrological change. The remainder were economic land use landscape classes including ‘Dryland agriculture’, ‘Irrigated agriculture’ and ‘Plantation or production forestry’.

Based on the known habitat preferences of the malleefowl, which include some types of dry sclerophyll forest, the ‘potential distribution of Malleefowl (Leipoa ocellata)’ asset was judged to be associated with wet and dry sclerophyll forests but not forested wetlands or any economic land use landscape classes. Hence, possible impacts on the asset are assessed based on the possible impacts on wet and dry sclerophyll forests, where they are coincident with the asset. The receptor impact model for wet and dry sclerophyll forests, described in Section 3.4.4.2, identified relationships between the hydrological response variable, maximum groundwater drawdown and the receptor impact variable projected foliage cover (see Section 2.7.4.3 in companion product 2.7 for the Hunter subregion (Hosack et al., 2018)). A severe reduction in pfc could indicate a complete change of vegetation state, equivalent to land clearing and complete loss of habitat, while a smaller reduction in pfc could indicate a reduction in primary productivity and litterfall, which could limit the availability of nesting materials or reduce cover needed to avoid predators, thus resulting in reduced suitability of habitat.

As reported in Section 3.4.4.3.1, the receptor impact model predicts little detectable impact on the condition of dry sclerophyll forests in the Hunter subregion due to additional coal resource development; however, there is very high uncertainty surrounding estimates of absolute values. Negative impacts of development on dry sclerophyll forest are most likely in the Macquarie-Tuggerah lakes basin. The area of dry sclerophyll forest within the zone that is also coincident with the ‘potential distribution of Malleefowl (Leipoa ocellata)’ asset, is located in the Goulburn River National Park, along the Goulburn River, 15 to 16 km east-north-east of the town of Ulan, near the northern end of Millers Trail. It intersects eight assessment units in the Upper Goulburn (Figure 76). All of these assessment units lie outside the groundwater zone of potential hydrological change; hence, none of these assessment units is potentially subject to additional drawdown of greater than 0.2 m as a result of additional coal resource development. Therefore, there is little chance of any dry sclerophyll forest that is potential habitat for malleefowl experiencing a hydrological change that is relevant to this landscape class, and little chance of any impact on the suitability of this forest for malleefowl habitat. In conclusion, there is little chance of any impact of additional coal resource development on the ‘potential distribution of Malleefowl (Leipoa ocellata)’ asset. 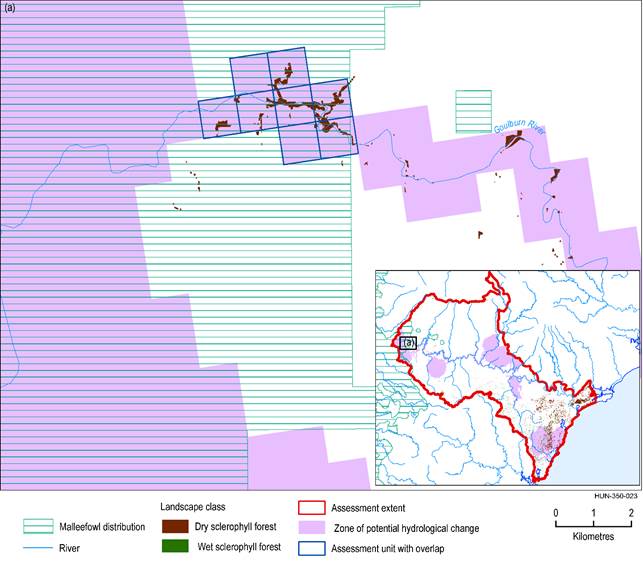