The objective of the Bioregional Assessment Programme is to understand and predict regional-scale cumulative impacts on water resources and water-dependent assets caused by coal resource developments in Australia’s major coal-bearing basins. The BAs distinguish areas where water resources and water-dependent assets are very unlikely to be impacted (with a less than 5% chance) from those where water resources and water-dependent assets are potentially impacted. Given the regional-scale focus, the modelling does not account for local-scale details (e.g. the presence of local aquitards; stream condition). Areas identified in a BA as at risk of potentially significant changes serve as ‘red flags’ for directing further local investigation. Governments, industry and the community can then focus on areas that are potentially impacted when making regulatory, water management and planning decisions. In some cases, the risk of adverse impacts may be substantially diminished or negligible when local-scale factors are brought to bear. An example of using local geological and hydrogeological information to constrain results from the regional-scale assessment is presented as part of the BA for the Hunter subregion (see companion product 2.6.2 for the Hunter subregion (Herron et al., 2018); Sections 3.3 and 3.4).

The impact and risk analysis considers only biophysical consequences, such as changes in hydrology or ecology; fully evaluating consequences requires value judgments and non-scientific information that is beyond the scope of BAs. A full risk assessment (with risk evaluation and risk treatment) is not conducted as part of BAs.

The purpose of this section is to highlight design choices that have steered the direction of this BA and culminated in the impact and risk analysis. Further details about the design choices are provided in companion submethodology M10 (as listed in Table 1) for analysing impacts and risks (Henderson et al., 2018).

The two futures considered in a BA are:

The difference in results between CRDP and baseline is the change that is primarily reported in a BA. This change is due to the additional coal resource development – all coal mines and CSG fields, including expansions of baseline operations that are expected to begin commercial production after December 2012. 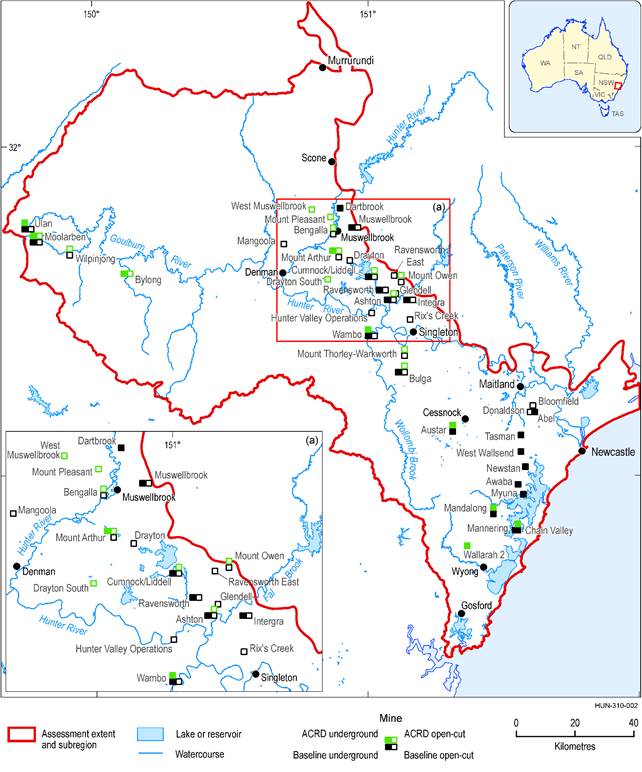 The CRDP is the most likely future, based on the analysis and expert judgment of the Assessment team in consultation with coal and gas industry representatives, state agencies and the Australian Government. The CRDP was finalised for the Hunter subregion based on information available in September 2015 (see companion product 2.3 (Dawes et al., 2018)) to allow the hydrological numerical modelling to commence. It is acknowledged that developments in the CRDP may ultimately be implemented in different ways (e.g. changes to timing), or circumstances may change (e.g. a proposal may be rejected, as was the case for the Drayton South Project, which was rejected by the NSW Planning Assessment Commission in February 2017 for the fourth time). This reflects the dynamic nature of resource investment decision making, related to diverse economic, environmental, political and social factors. Consequently, the CRDP needs to be viewed as an indicative future that highlights potential changes for water resources and water-dependent assets that may need to be considered further in local analyses or via approval conditions required by regulators. Equally as important, the CRDP plays a role in identifying where changes will not occur, flagging where potential impacts to water resources and water-dependent assets are very unlikely.

Factors such as climate change and land use (e.g. agriculture) were held constant between the two futures. Although the future climate and/or land use may differ from those assumed in BAs, the effect of this choice is likely to be small because the focus of BAs is on reporting the difference in results between the CRDP and baseline.

3.1.2.2 Focus on water quantity and availability

BAs focus solely on water-related impacts, and specifically those related to water quantity and availability. Potential water quality hazards are identified, but the analysis, as determined by the BA scope, is limited to salinity and is only addressed qualitatively. BAs are also concerned with those surface water and groundwater effects that may accumulate, either over extended time frames or as a result of multiple coal resource developments. These typically correspond to changes in surface water and groundwater that are sustained over long periods of time, sometimes decades, and which may create the potential for flow-on effects through the wider hydrological system.

Many activities related to coal resource development may cause local or on-site changes to surface water or groundwater. These are not considered in the BA because they are assumed to be adequately managed by site-based risk management and mitigation procedures, and are unlikely to create potential cumulative impacts. Impacts and risks associated with water quality attributes other than salinity that are potentially affected by coal resource development are identified, but not analysed further, in this BA.

BAs are designed to analyse the cumulative impacts of coal resource developments at a regional scale, and not focus specifically on individual mines or CSG operations. The baseline and CRDP for the Hunter subregion each comprise a suite of developments, which are distributed across the assessment extent at variable distances from each other and have variable, but often overlapping, periods of operation. Thus, there is potential for the impacts to accumulate to varying degrees in both space and time.

Regional-scale models are used to predict the cumulative hydrological changes and potential impacts of those developments on landscape classes and water-dependent assets from multiple developments over time. The area of potential impact is expected to be more extensive and extend greater distances downstream of developments than what is predicted from site-scale, single mine models. In some cases the spatial or temporal alignment of certain coal resource developments can allow for attribution of potential effects to individual developments, but that occurs because of that alignment rather than by design.

Results of the impact and risk analysis reported in this product do not replace the need for the detailed site- or project-specific investigations that are currently required under existing state and Commonwealth legislation. The hydrological and ecological systems modelling undertaken for a BA are appropriate for assessing the potential impacts on and risks to water resources and water-dependent assets at the ‘whole-of-basin’ scale, whereas the modelling undertaken by a mining proponent for an individual development, as part of an environmental assessment, occurs at a much finer scale and makes use of local information to more accurately represent the local situation. Therefore, results from these detailed mine-specific studies are expected to differ from those from a BA. However, as a range of potential parameter values are considered in a BA, it is expected that the range of possible outcomes predicted by a BA will encompass the results from individual site-specific studies. This is illustrated in this product using local hydrogeological data from the Wyong river basin to constrain the set of results based on the regional parameter set.

In BAs, parameter uncertainty is considered as fully as possible when predicting hydrological outcomes (i.e. changes to surface water or groundwater) and ecological outcomes (i.e. changes to ecologically relevant receptor impact variables). For example, groundwater models are run many thousands of times using a wide range of plausible input parameters for the critical hydraulic properties, such as the hydraulic conductivity and storage coefficients of all modelled hydrogeological layers. This differs from the traditional deterministic approach used more routinely for groundwater and surface water modelling.

While models are constrained to data, the density of reliable observation data is sparse, so results may not represent local conditions well. However, they do consistently represent the risk and uncertainty at all sites through probability distributions of possible hydrological changes, where the area, depth, timing and assumed pumping rates of each development largely determine the spatial variation, and lack of detail about the physical environment at any given point in the assessment extent define the uncertainty.

Given the wide range of plausible input parameters used in the regional modelling, the hydrological changes due to additional coal resource development at any given location within the assessment extent can be assumed to lie within the distribution of modelled changes. This assumption may not be valid near open-cut mines where potentially steep hydraulic gradients at the mine pit interface are poorly resolved in the regional groundwater models. These areas are excluded from the ecological analysis for this reason. Where the BA regional-scale analysis identifies an area as ‘at risk’ of large hydrological changes and potentially significant impacts on ecological, economic and/or sociocultural values, local scale information may be necessary to constrain the predictive uncertainty to something more representative of local conditions, and more appropriate for informing the management response.

The quantitative representation of the predictive uncertainty through probability distributions allows BAs to consider the likelihood of impacts with a specified magnitude and underpins the impact and risk analysis. Sources of uncertainty that cannot be quantified are considered qualitatively.

Subregions are complex landscapes with a wide range of human and ecological systems. The systems can be discrete, overlapping or integrated. Because of this complexity, a direct analysis of each and every point, or water-dependent asset, in the landscape across the subregion is not currently possible, nor warranted in a regional-scale assessment. Abstraction and a systems-level classification can simplify the challenges of the dimensionality of the task and direct the focus to those landscape classes that are water dependent.

An important outcome of the multiple components of this BA is to identify areas of the Hunter subregion that are very unlikely to be impacted by additional coal resource development. Potential impacts are ruled out where possible, both spatially and in terms of specific groundwater or surface water effects, in order to focus the analysis on where potential impacts have a higher probability of occurring. This process starts with defining a preliminary assessment extent (PAE) for a subregion or bioregion that is a conservative spatial boundary, encompassing areas of potential impact based on the most likely coal resource developments within the subregion. The PAE is where assessment effort was preferentially focused when collating water-dependent assets, defining landscape classes to summarise key surface ecosystems, and constructing numerical surface water and groundwater models.

Results of the hydrological modelling are also used to define the zone of potential hydrological change (Section 3.3.1). Potential impacts on water-dependent landscape classes and assets are ruled out if they are wholly outside the zone of potential hydrological change. Thus, the zone is used to identify landscape classes that should be investigated further through qualitative mathematical modelling and receptor impact modelling, and, as required, through use of local information to better define the risk and appropriate management response. Equally important, this logical and consistently applied process rules out landscape classes or water-dependent assets where potential impacts due to additional coal resource development are very unlikely (less than 5% chance) to occur.