The hydrological analysis encompasses the surface water and groundwater modelling reported in companion product 2.6.1 (Zhang et al., 2018) and companion product 2.6.2 (Herron et al., 2018b), respectively, for the Hunter subregion. The Hunter surface water and groundwater models were designed to quantify potential changes in hydrology from multiple coal resource developments and enable an assessment of the cumulative impacts of coal resource development at a regional scale. The assessment focuses on the hydrological changes in the zone of potential hydrological change. Outside this zone, potential impacts due to additional coal resource development are considered very unlikely (less than 5% chance). See Section 3.3.1 for more details.

Coal resource developments affect groundwater hydrology as a result of aquifer depressurisation from mine dewatering and changes to the subsurface physical flow paths, such as hydraulic enhancement above longwall mines. In the Hunter groundwater model, a single regional-scale watertable was subjected to groundwater pumping at locations, depths, rates and periods of time as specified in mine groundwater assessments for baseline and additional coal resource developments. Above longwall panels, the hydraulic properties of the overburden were enhanced stochastically to represent the range of potential physical changes associated with mine subsidence (see Section 2.1.6 of companion product 2.1-2.2 for the Hunter subregion (Herron et al., 2018a)).

For BA purposes, the regional watertable is the upper groundwater level within the unconfined aquifer (not perched), where pore water pressure is equal to atmospheric pressure. In the Hunter subregion, it spans the modelling domain (Figure 8), which includes the alluvium of the Hunter and Macquarie-Tuggerah lakes river basins and the outcropping weathered and fractured layers beyond the alluvium.

The model simulates the changes in the regional watertable and surface water – groundwater fluxes from coal resource development between 1983 and 2102 and outputs results at model nodes across the modelling domain (Figure 8). Details of the groundwater modelling are reported in companion product 2.6.2 for the Hunter subregion (Herron et al., 2018b). To produce drawdown surfaces, the results generated at model nodes were spatially interpolated using Delaunay triangulation. The changes in surface water – groundwater fluxes were input into the Hunter AWRA-R model to represent the changes in baseflow along the modelled river network. 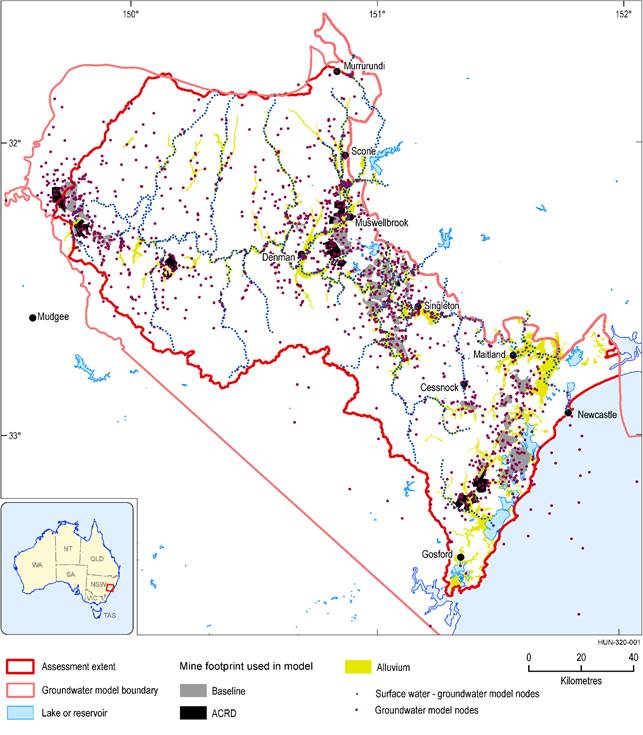 In areas identified from the regional-scale assessment as ‘at risk’ of potentially significant changes in hydrology, local information is needed to determine whether the assessment can be constrained to reduce the predictive uncertainty. Groundwater model emulators trained with local hydrogeological data or subsampling of the groundwater model simulations based on local data are two ways in which the predictions from the regional analysis can be constrained to produce more locally relevant results. In the Wyong river basin, where results from the regional-scale groundwater and surface water modelling indicate a risk of potentially significant changes in streamflow in what is an important urban water supply catchment, local-scale hydrogeological information has been used to refine the regional-scale predictions to get a better understanding of the risk in this area (see Section 2.6.2.8 of companion product 2.6.2 for the Hunter subregion (Herron et al., 2018b)).

Coal resource developments affect surface water hydrology directly through disruption of surface drainage and some aspects of operational water management, and indirectly through changes in surface water – groundwater fluxes in response to aquifer depressurisation from mine dewatering and enhancement of subsurface physical flow paths. Changes in surface water – groundwater fluxes are generated in the Hunter groundwater model at points along the river network for input into AWRA-R (see companion product 2.6.2 for the Hunter subregion (Herron et al., 2018b)).

Results for nine hydrological response variables (described in Table 6) were reported for 65 model nodes across the Hunter subregion. The locations of these model nodes are shown in Figure 9. Additional hydrological response variables have been defined for receptor impact modelling (see companion product 2.7 for the Hunter subregion (Hosack et al., 2018a)) and for assessing economic impacts, and are considered further in the impacts on landscape classes and assets sections (Section 3.4 and Section 3.5).

In order to carry out the impact and risk analysis, results from these model nodes needed to be extrapolated to stream links. Extrapolating these changes results in a more comprehensive assessment of the changes in surface water across the assessment extent. The process for extrapolating hydrological response variable values from model nodes to stream links is shown schematically in Figure 10. The schematic includes a number of stream links with no model nodes (dashed lines) for which model results were not generated, but which were important for doing the extrapolations. The junctions of these non-modelled streams with the modelled network correspond to large changes in streamflow and hence represent limits to extrapolation from the nearest upstream or downstream model node.

Extrapolations were also not undertaken for stream links that contain inflows from open-cut coal mines (e.g. Loders Creek between node 9 and its junction with Doctors Creek; Bylong River between nodes 43 and 44). Because the impact of a mine on streamflow diminishes with increasing distance downstream of the mine, it is difficult to know how far along the reach it is reasonable to extrapolate from the nearest model node before the hydrological changes at that node are no longer representative of the hydrological changes at that point in the reach. Thus, they were classified as potentially impacted and included in the zone of potential hydrological change. Modelled results from nodes 8, 9, 13, 15, 22, 26, 27, 28, 29, 30, 43, 44, 51 and 52 have not been used to characterise the hydrology of the reaches immediately upstream and downstream of them because they are not considered to be representative of those reaches, although they contain useful at-a-point information.

Section 3.3.1.2 describes how the surface water modelling results are used to define the surface water zone of potential hydrological change. In the subsequent analysis of hydrological changes within the zone of potential hydrological change (Section 3.3.3), the effect on Wyong River streamflow predictions of constraining the regional result set based on local hydrogeological information from the proposed Wallarah 2 mine area is presented. This involved calculating the hydrological response variables using only those surface water model simulations from the regional set, which included baseflow changes from the groundwater model constrained by local hydrogeological information (see Section 2.6.2.8 in companion product 2.6.2 for the Hunter subregion (Herron et al., 2018b)). 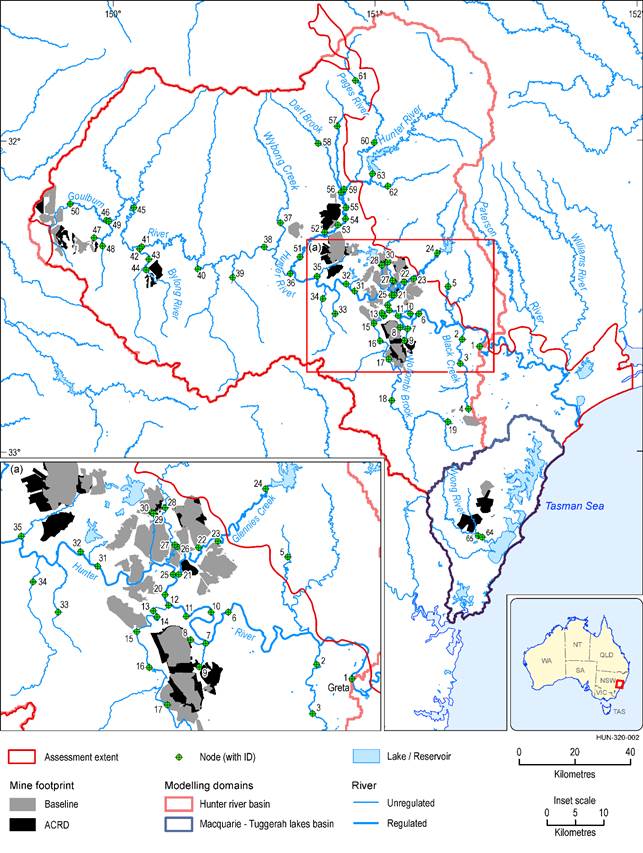 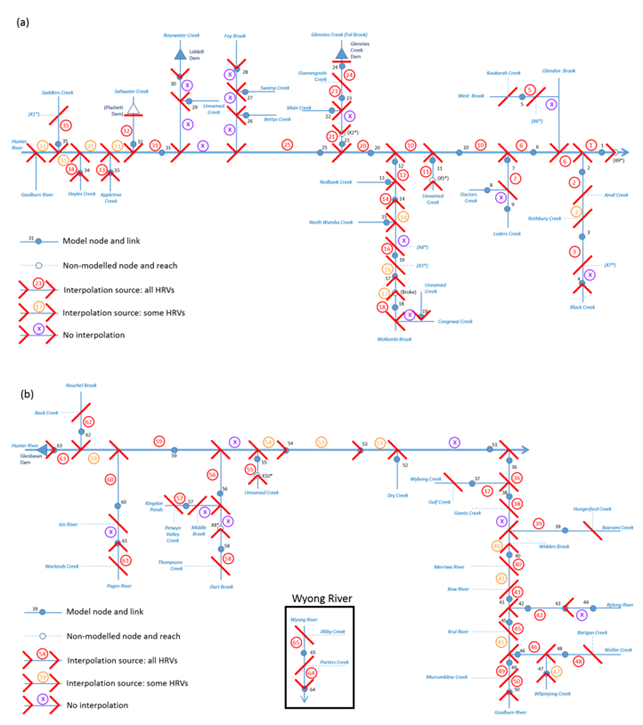 Figure 10 Scheme for extrapolating hydrological response variables from model nodes to stream links for (a) the Lower Hunter River and (b) modelled river networks for the Upper Hunter, Goulburn and Wyong rivers

The models used in the assessment produce a large number of predictions of groundwater drawdown and streamflow characteristics rather than a single number. This results in a range or distribution of predictions, which are typically reported as probabilities – the percent chance of something occurring (Figure 11). This approach allows an assessment of the likelihood of exceeding a given magnitude of change, and underpins the assessment of risk.

Groundwater models require information about physical properties such as the thickness of geological layers, how porous aquifers are, and whether faults are present. As the exact values of these properties are not always known, the modellers used a credible range of values, which are based on various sources of data (commonly point-scale) combined with expert knowledge. The groundwater model was run 1500 times using a different set of plausible values for those physical properties each time. Historical observations, such as groundwater level and changes in water movement and volume from across the subregion, were used to constrain and validate the model runs.

The resultant set of model runs produces a range or distribution of predictions (Figure 11) that are consistent with the available regional observations and the understanding of the modelled system. The range conveys the confidence in model results, with a wide range indicating that the expected outcome is less certain, while a narrow range provides a stronger evidence base for decision making. The distributions created from these model runs are expressed as probabilities that drawdown or a change in streamflow will exceed relevant thresholds, as there is no single ‘best’ estimate of change.

In this assessment, the estimates of drawdown or streamflow change are shown as 5th, 50th or 95th percentile results, corresponding to a 95%, 50% or 5% chance of exceeding thresholds. Figure 12 illustrates this predictive uncertainty spatially.

The chart on the left shows the distribution of results for drawdown, obtained from an ensemble of thousands of model runs that use many sets of parameters. These generic results are for illustrative purposes only. 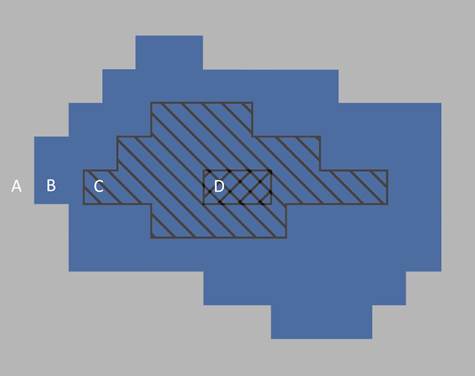 The assessment extent was divided into smaller square assessment units (see Section 3.2.4.1) and the probability distribution (Figure 11) was calculated for each. In this product results are reported with respect to the following key areas:

B. inside the zone of potential hydrological change, comprising the assessment units with at least a 5% chance of exceeding the threshold (defined by maps showing the 95th percentile). Further work is required to determine whether the hydrological changes in the zone translate into impacts for water-dependent assets and landscape classes