In BA, receptor impact models for ecological water-dependent assets are conditioned upon, and therefore depend on, landscape classes. A landscape class is defined as an ecosystem with characteristics that are expected to respond similarly to changes in groundwater and/or surface water due to coal resource development. Each bioregion has multiple landscape classes grouped into landscape groups.

The workflow for ecological receptor impact modelling is outlined in Figure 3. Input from independent external ecology experts contributes to the workflow at three separate stages (2, 3 and 5 in Figure 3), along with output from hydrological modelling (i.e. companion product 2.6.1 (Zhang et al., 2018) and companion product 2.6.2 (Peeters et al., 2018) for the Gloucester subregion) and the expertise of the hydrology modellers. External experts, hydrologists and risk analysts contribute to the selection of hydrological response variables that are ecologically meaningful and also accessible to hydrological modelling. The expert elicitation data are available as a downloadable dataset from data.gov.au. 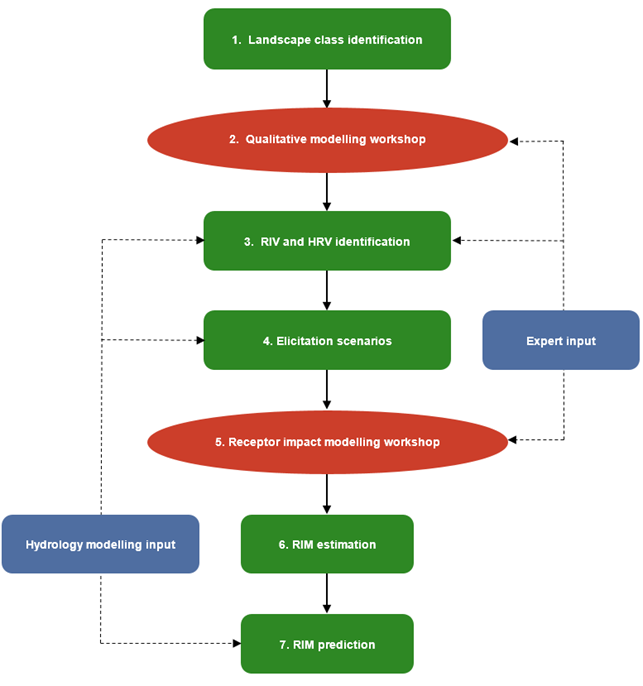 The workflow leads to the construction of a receptor impact model (RIM) that predicts the response of a receptor impact variable (RIV) conditional on hydrological response variables (HRVs). The uncertainty encapsulated by the hydrology modelling is propagated through the RIM when predicting the RIV response to the choice of BA futures (baseline or coal resource development pathway) across a landscape class. Workshop steps are shown in red, ecology and hydrology expert input sources are shown in blue.

2.7.1.2.1 Identification of landscape classes that are potentially impacted

It is important to recognise that the zone of potential hydrological change represents a conservative estimate of those parts of the landscape where there is a small chance of some minimal level of hydrological change attributable to coal resource development. The zone serves only to identify those landscape classes that should be taken to the next step of the receptor impact methodology from those landscape classes that should not (Stage 1 in Figure 3), on the grounds that the latter are predicted to experience negligible (or insignificant) exposure to hydrological change due to coal resource development.

BA uses qualitative mathematical models to describe landscape class ecosystems, and to predict (qualitatively) how coal resource development will directly and indirectly affect these ecosystems. Qualitative mathematical models were constructed in dedicated workshops, attended by experts familiar with the Gloucester subregion (Table 3; Stage 2 in Figure 3). In the workshop, ecological and hydrological experts were asked to describe how the key species and/or functional groups within the landscape class ecosystem interact with each other, and to identify the principal physical processes that mediate or otherwise influence these interactions. During this process the experts were also asked to identify how key hydrological processes support the ecological components and processes of the landscape class. The experts’ responses were formally translated into qualitative mathematical models which enable the BA team to identify critical relationships and variables, which will later become the focus of the quantitative receptor impact models. Qualitative modelling proceeds from the construction and analysis of sign-directed graphs, or signed digraphs, which are depictions of the variables and interactions of a system. These digraphs are only concerned with the sign (+, –, 0) of the direct effects that link variables. For instance, the signed digraph in Figure 4 depicts a straight-chain system with a basal resource (R), consumer (C) and predator (P). There are two predator-prey relationships, where the predator receives a positive direct effect (i.e. nutrition, shown as a link ending in an arrow (

)), and the prey receives a negative direct effect (i.e. mortality, shown as a link ending in a filled circle (

)). The signed digraph also depicts self-effects, such as density-dependent growth, as links that start and end in the same variable. In the example in Figure 4 these self-effects are negative.

The structure of a signed digraph provides a basis to predict the stability of the system that it portrays, and also allows the analyst to predict the direction of change of all the model’s variables (i.e. increase, decrease, no change) following a sustained change to one (or more) of its variables. The signed digraph in Figure 4, for example, is stable because: (i) it only has negative feedback cycles; (ii) the paths leading from the predators to their prey and back to the predator are negative feedback cycles of length two; and, (iii) there are no positive (destabilising) cycles in the system. This model therefore predicts that if this system were to experience a sudden disturbance to one of its population variables (i.e. pulse perturbation) it would be expected to return relatively quickly to its previous state or equilibrium.

The predicted direction of change of the variables within a signed digraph to a sustained change in one or more of its variables is determined by the balance of positive and negative effects through all paths in the model that are perturbed. Consider, for example, a pressure to the system depicted in Figure 4 that somehow supplements the food available to the predator P causing it to increase its reproductive capacity. The predicted response of C is determined by the sign of the link leading from P to C, which is negative (denoted as P

C). The predicted response of R will be positive because there are two negative links in the path from P to R (P

In the system depicted in Figure 4, the response of the model variables (P, C, R) to a sustained pressure will always be unambiguous – the predictions are said to be completely sign determined. This occurs in this model because there are no multiple pathways between variables with opposite signs.

By way of contrast, the signed digraph depicted in Figure 5 is more complex because it includes an additional consumer and a predator that feeds on more than one trophic level. This added complexity creates multiple pathways with opposite signs between P and R.

Here the predicted response of R due to an increase in P will be ambiguous, because there are now three paths leading from P to R, two positive (P

R) and one negative (P

R). The abundance of the resource may therefore increase or decrease. This ambiguity can be approached in two ways. One is to apply knowledge of the relative strength of the links connecting P to R. If P was only a minor consumer of R then the R would be predicted to increase. Alternatively, if R was the main prey of P, and C1 and C2 amounted to only a minor portion of P’s diet, then R would be predicted to decrease in abundance.

In many cases, however, there is insufficient knowledge of the strength of the links involved in a response prediction. In these instances, Dambacher et al. (2003) and Hosack et al. (2008) describe a numerical simulation approach that estimates the probability of sign determinacy for each response prediction. In the Figure 5 example, with two positively signed paths and one negatively signed path there is a net of one positive path (i.e. it is considered that a negatively signed path cancels a positively signed path) out of a total of three paths. According to this approach, in the system depicted in Figure 5, R is predicted to increase 77% of the time because of the ratio of the net to the total number of paths.

In BA, qualitative mathematical models are used to represent how ecosystems will respond qualitatively (increase, decrease, no change) to changes in the hydrological variables that support them. The models also provide a basis for identifying receptor impact variables and hydrological response variables that are the subject of the quantitative receptor impact models (Stage 3 in Figure 3).

The qualitative mathematical models identify a suite of hydrological variables that support the landscape class ecosystem. These variables are sometimes expressed as hydrological regimes, for example a surface water flow regime wherein overbank floods occur on average once every 3 years. The hydrological variables in these models are linked to the hazard analysis (companion submethodology M11 (as listed in Table 1) for hazard analysis (Ford et al., 2016)) and provide the mechanism by which BA identifies the way in which coal resource development can adversely affect groundwater and surface water dependent ecosystems.

Hydrological response variables are derived from the numerical surface water and groundwater model results to represent these ecologically important water requirements. The surface water modelling incorporates a mid-range climate projection and potential changes to precipitation. Further details on the climate scenario used are provided in companion product 2.6.1 for the Gloucester subregion (Zhang et al., 2018). The surface water hydrological response variables in the receptor impact models are defined in terms of mean annual values for two 30-year periods: 2013–2042 and 2073–2102 (e.g. mean number of overbank flows per year between 2013 and 2042). The hydrological response variables are generalised for the assessment extent and thus serve as indicators of change in ecologically important flows, rather than accurate characterisation of flow regimes at local scales. They differ from the hydrological response variables defined in companion product 2.6.1 (Zhang et al., 2018), which represent the maximum difference between the CRDP and baseline simulations over the 90-year (2013–2102) simulation period. Receptor impact variables are selected according to the following criteria:

The goal of the receptor impact modelling workshop (Stage 5 in Figure 3) is to predict how a given receptor impact variable will respond at future time points to changes in the values of hydrological response variables, whilst acknowledging that this response may be influenced by the status and condition of the receptor impact variable in the reference year (2012). Response variables to represent changes in water quality that might be expected to accompany changes in the relative contributions of surface runoff and groundwater to streamflow are not included in the models or the elicitations.

The elicitation generates subjective probability distributions for the expected value of the receptor impact variable under a set of hydrological scenarios that represent possible combinations of changes to hydrological response variables. These scenarios are the elicitation equivalent of a sampling design for an experiment where the aim is to maximise the information gain and minimise the cost. The same design principles therefore apply (Stage 4 in Figure 3).

BA addresses the question ‘How might selected receptor impact variables change under various scenarios of change for the hydrological response variables?’ through formal elicitation of expert opinion. This is a difficult question to tackle and presents a challenging elicitation task. BA implements a number of processes that are designed to help meet this challenge: (i) persons invited to the receptor impact modelling workshops are selected based on the relevance of their domain expertise; (ii) all experts are provided with pre-workshop documents that outline the approach, the expectations on the group and the landscape classes and descriptions; and subsequently the finalised qualitative models; and, (iii) experts are given some training on subjective probability, common heuristics and biases, together with a practice elicitation.

The elicitation proper follows a five-step procedure (described in detail in companion submethodology M08 (as listed in Table 1) for receptor impact modelling (Hosack et al., 2018)) that initially elicits fractiles, fits and plots a probability density function to these fractiles, and then checks with the experts if fractiles predicted by the fitted density are sufficiently close to their elicited values. This process is re-iterated until the experts confirm that the elicited and fitted fractiles, and the fitted lower (10th) and upper (90th) fractiles, provide an adequate summary of their opinions for the elicitation scenario concerned.

The experts’ responses to the elicitations are treated as data inputs into a Bayesian generalised linear model (Stage 6 in Figure 3; see companion submethodology M08 (Hosack et al., 2018)). The model estimation procedure allows for a wide variety of possible model structures that can accommodate quadratic responses of receptor impact variables to changes in hydrological response variables, and interactive (synergistic or antagonist) effects between hydrological response variables. The procedure uses a common model selection criteria (the Bayesian Information Criterion) to select the model that most parsimoniously fits the experts’ response to the elicitation scenarios.

Table 4 Summary of the receptor impact modelling assumptions, their implications, and their acknowledgement in bioregional assessments