The signed digraph for the qualitative mathematical model of intermittent gravel/cobble streams (Figure 21) combines a subset of the components and processes identified in the model for perennial gravel/cobble stream reaches and pools with ecological and environmental features expected to characterise refugia in intermittent streams. The model is based primarily on no-flow conditions, when the isolated pools are separated by dry reaches of stream channel. This essentially eliminates the fast-water habitat units from the system at this time, along with slow- and high-flow macroinvertebrates, which are both associated with this habitat type (Chessman et al., 2012). The model also removes groups that depend on these macroinvertebrate communities (i.e. their predators and platypus).

Pool habitat is included in the model because of its importance in providing pool refugia for fishes. These pools are maintained by groundwater and periodically replenished with surface flow. The model identifies two fish groups that are especially dependent on these pools, namely gudgeon and other small native fishes, and catfish. The eel-tailed catfish (Tandanus tandanus) is non-migratory and, although it lives in a wide range of habitats, it prefers sluggish or still waters (Fisheries Scientific Committee, 2008). Amphibians and reptiles also depend on pool habitats and components associated with riparian vegetation, such as large woody debris, woody riparian vegetation and herbaceous vegetation (Catterall et al., 2007). The model notes that the biomass of amphibians, gudgeon and other native fishes can be impacted by predators including the introduced mosquito fish Gambusia holbrooki (Pyke, 2008). Similarly, carp (Cyprinus carpio) are depicted as having a negative effect on catfish recruitment through egg predation (Koehn et al., 2000). Submerged macrophytes act in the model as an important flowing-water habitat feature that supports recruitment of native fishes, and also predators that migrate into wetted stream reaches (e.g. eels, bass and avian predators), and then regulate populations of native fishes (Robson et al., 2009). This variable, however, and others marked with an asterisk in Figure 21 are only present or activated during flowing-water conditions (Figure 11). 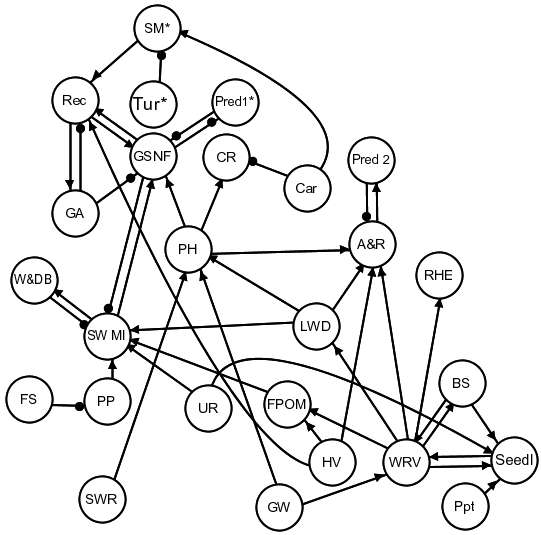 An analysis of plausible impacts due to coal resource development, suggests that there are three potential impact scenarios that may occur in this landscape class due to individual or combined changes in the hydrological regimes identified in the model (Table 17).

Cumulative impact scenarios are determined by combinations of no change (0) or a decrease (–) in the following signed digraph variables: surface water replenishment (SWR) and depth to groundwater (GW). Scenario C3 shows the changes to these variables under the coal resource development pathway (CRDP).

Qualitative analysis of the signed digraph (Figure 21) generally gives predictions for a negative or zero (no change) response for many of the variables across the three cumulative impact scenarios (Table 18). Scenarios involving a decrease in groundwater (C1 and C2), lead to a predicted decrease in the woody riparian vegetation, large woody debris, bank stability and fine particulate organic matter, which accordingly results in a predicted decrease in quality of pool habitat, and densities of amphibians and reptiles. Flow-on effects also include a predicted decrease in native fish recruitment and population density and also a decrease in catfish recruitment. The predicted response to still-water macroinvertebrates, however, is ambiguous in these two scenarios due to both a diminishment of benefits provided by woody riparian vegetation (via large woody debris and fine particulate organic matter) and a release from native fish predation. In the scenario involving only impacts to surface water replenishment (C3), there are no predicted impacts to woody riparian vegetation, and the release from predation is predicted to cause an increase in still-water macroinvertebrates as well as their wading-bird predators.

Qualitative model predictions that are completely determined are shown without parentheses. Predictions that are ambiguous but with a high probability (0.80 or greater) of sign determinancy are shown with parentheses. Predictions with a low probability (less than 0.80) of sign determinancy are denoted by a question mark. Zero denotes completely determined predictions of no change. Asterisks denote variables present during flowing-water conditions.

The initial receptor impact modelling workshop for the Gloucester subregion was unable to address the ‘Intermittent – gravel/cobble streams’ landscape class. The Bioregional Assessment Programme addressed this omission by holding a second elicitation with a single expert. This expert, however, elected to address the subsurface fauna in riffle habitats (which was not represented in the qualitative model) and its response to the number of zero-flow days (averaged over 30 years) (ZQD, subsequently referred to in this Section as ‘zero-flow days’). During periods of zero flow and low flow (Figure 12 and Figure 13), low flows are important for maintaining vertical connectivity to the hyporheic zones of the streambeds (Ward, 1989; Kondolf et al., 2006), and for maintaining longitudinal connectivity within the landscape by linking instream habitats and allowing dispersal of instream biota (Dollar, 2000; Robson et al., 2009; Marsh et al., 2012; Boulton et al., 2014). The hyporheic zone is functionally very important to river ecosystems. Interactions among hydrological, ecological, and biogeochemical processes in the hyporheic zone influence key stream ecosystem processes, such as primary productivity and nutrient cycling (Boulton et al., 2010) and the hyporheic zone provides refuge to microbes and nearly all groups of invertebrates (Mugani et al., 2015) and are used by some fish for spawning (see Boulton et al., 2010 and references therein). The ecology of the taxa of the hyporheic zone is increasingly well known (see reviews by Boulton et al., 2010; Mugnai et al., 2015). The hyporheic zone relies on subsurface flow to persist when surface flow ceases; hence, it can persist in intermittent rivers and streams but is sensitive to the length and frequency of zero-flow spells.

The receptor impact model for intermittent gravel/cobble streams therefore focused on the following relationship: the mean richness of hyporheic invertebrate taxa in 6 L of water pumped from a depth of 40 cm below the streambed (riffle and gravel bars), to changes in ZQD (Table 19).

Table 19 Summary of the hydrological response variables used in the receptor impact models for the ‘Intermittent – gravel/cobble streams’ landscape class, together with the signed digraph variables that they correspond to for the Gloucester subregion

Table 20 summarises the elicitation matrix for the richness of hyporheic taxa. The first three design points – design point identifiers 1, 2 and 3 – address the predicted variability (across the landscape class in the reference interval) in ZQD, capturing the lowest and highest predicted values together with one intermediate value. These design points provide for an estimate of the uncertainty in hyporheic invertebrate taxa richness across the landscape class in the reference year 2012 (Yref).

Design points 1, 3, 5, 8 and 12 represent scenarios that span the uncertainty in the predicted values of ZQD in the relevant time period of hydrological history associated with the short (2042) and long (2102) assessment years, combined with high and low values of Yref. The high and low values for Yref were again calculated during the receptor impact modelling workshop.

Design points for the reference value (Yref) that are used to evaluate ts effect on impacts that occur in the future (short- and long-assessment periods) are calculated during the receptor impact modelling elicitation workshop using elicited values for the receptor impact variable in the reference period. All other design points (with identifiers) are either default values or values determined by groundwater and surface water modelling. ZQD = zero-flow days (averaged over 30 years), na = not applicable

The fitted model for hyporheic taxa richness takes the form:

are as before and

is the value of ZQD. The (marginal) mean and 80% central credible interval of the coefficient for this hydrological response variable are summarised in the partial regression plots in Figure 22, whilst Table 21 summarises the same information for all five model coefficients. 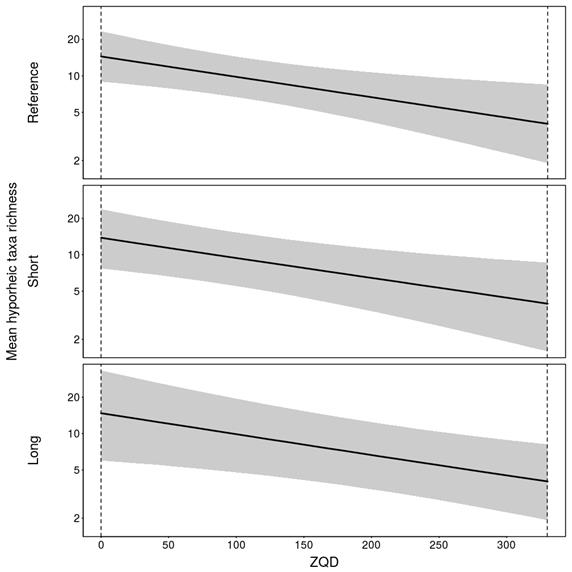 Table 21 Mean, 10th and 90th percentile of the coefficients of the receptor impact model for mean hyporheic taxa richness in the ‘Intermittent – gravel/cobble streams’ landscape class for the Gloucester subregion

The model indicates that the expert’s elicited information strongly supports the hypothesis that an increase in ZQD will have a negative effect on the mean richness of hyporheic invertebrate taxa despite the expert being quite uncertain about its average value. The model suggests that it can vary substantially across the landscape class from 10 to 20 per sampling unit under conditions of constant flow (ZQD = zero), holding all other covariates at their mid-values. As the number of zero-flow days (averaged over 30 years) (ZQD, subsequently referred to in this Section as ‘zero-flow days’) increases, however, experts were of the opinion that density would drop to values from 1 to 8 under extremely intermittent flow conditions (ZQD >300 days) (Figure 22).

There was very little evidence in the elicited data to suggest that this effect would be substantially different in the future assessment years. Again this is indicated by the almost-identical partial regression plots in the reference, short- and long-assessment years (Figure 22), and the relatively symmetric negative 10th and positive 90th percentiles for the long and future coefficients in Table 21. The model does, however, suggest that the experts’ uncertainty increased slightly for predictions in the future assessment years relative to the reference year.

The best-fitting model in this case, again, is unable to eliminate the possibility that the average richness of hyporheic invertebrate taxa in the reference years has no influence on its density in the future years. This is indicated by the fact that

is close to the 50th percentile of its induced prior (Table 21). This suggestion is consistent with the hypothesis that there is likely to be very little lag in the response of short-lived (most taxa live less than 5 to 10 years) species to changes in the hydrological response variables.