A qualitative model was developed to describe the forest communities in landscape classes that are in floodplains and wetlands (Figure 24). Drawdown of groundwater by coal mines and coal seam gas (CSG) development in the AE for the Gloucester subregion is predicted to impact the supply of both deep and shallow groundwater (DGW and SGW, respectively in Figure 24) to these forest communities. In some instances, the coal mine footprint will also have a direct impact on the remaining amount of forested wetlands in the AE, which will lead to impacts via forest fragmentation (FF).

The principal ecosystem components, processes and functions attributed to wetland forests were the roles that their canopies offered in providing flower nectar (FN), which is a food resource for bird and mammal consumers such as the swift parrot (SP), regent honeyeater (RHE), arboreal mammals (AM) and grey-headed flying fox (GHFF; Commonwealth of Australia, 2015; Saunders and Tzaros, 2011), as well as insects, and habitat structure, such as tree hollows for nesting (Commonwealth of Australia, 2015; Saunders and Tzaros, 2011), and also in providing habitat for various predatory diurnal and nocturnal raptors (DR and NR, respectively), such as the red goshawk (Erythrotriorchis radiatus). Contiguous unfragmented forest canopies were described as being an especially critical habitat feature for aggressive native honeyeaters (ANHE), such as the noisy miner (Manorina melanocephala), noisy friarbird (Philemon corniculatus) and red wattlebird (Anthochaera carunculata), which exert a strong competitive hierarchy on the community of nectar consumers. Koalas (Koa) also benefit from forest canopies (FWOS) for all aspects of their life history requirements. On the one hand, the supply of deep groundwater was thought to be critical for the survival of forested wetlands, and it was suggested that vegetation accesses these stores through deep root systems. On the other hand, shallow groundwater, along with rainfall (Ppt), was described as being a main factor in the magnitude of flower and nectar production, and shallow groundwater was also critical for the presence of a herbaceous wetland vegetation (HWV). In a recent study of riparian Tamarix, Anderson and Nelson (2013) failed to find any relationship between depth to groundwater and noted: ‘The extent to which a reduction in soil water availability will affect riparian plant floral ecology, riparian pollinators, and plant pollinator interactions is largely unknown, because we lack information on most plant species’ response to shifts in depth to groundwater’. 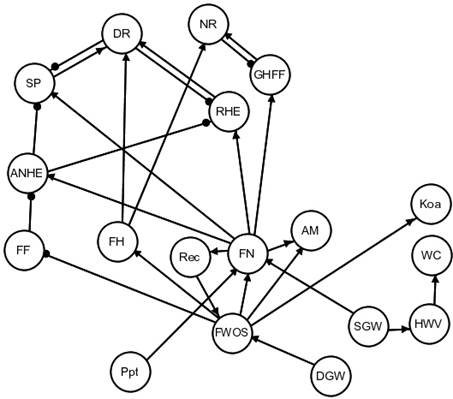 Surface water and groundwater modelling predict potential impacts of coal mining to both deep and shallow groundwater stores, and a single cumulative impact scenario (C1) was developed based on a simultaneous decrease in both these sources of groundwater (Table 24).

Cumulative impact scenarios are determined by combinations of no change (0) or a decrease (–) in the following signed digraph variables: deep groundwater (DGW), shallow groundwater (SGW). Scenario C1 shows the changes to these variables under the coal resource development pathway (CRDP).

Qualitative analysis of the signed digraph model (Figure 24) generally indicates an ambiguous or negative response prediction for biological variables within the forested wetlands community as a consequence of a decrease in available nectar production and quality of forest habitats (Table 25). Ambiguity in the response predictions for swift parrots, diurnal raptors and the regent honeyeater arise from positive effects associated with the potential release from competitive dominance by aggressive native honeyeaters matched by negative effects resulting from reduced nectar production. An ambiguous response prediction for grey-headed flying foxes stems from a potential decrease in nectar resources and a possible decline in the abundance of their nocturnal raptor predators due to habitat loss.