Groundwater-dependent ecosystems (GDEs) are those that rely on the surface or subsurface expression of groundwater to meet all or some of their life cycle requirements (Eamus et al., 2006). The dependence of GDEs on groundwater varies both spatially and temporally (Eamus et al., 2006). Ecosystems may be obligate GDEs, with a continuous or entire dependence on groundwater, or facultative GDEs, with an infrequent or partial dependence on groundwater (Zencich et. al., 2002). Plants that depend solely on moisture held within the soil profile are known as vadophytes and are not groundwater dependent (Sommer and Froend, 2010). In the Gloucester subregion, as in much of Australia, there is considerable uncertainty as to the nature of groundwater dependency for much terrestrial vegetation. The hydroclimatic environment of the Gloucester subregion is subtropical. Average annual rainfall is reasonably high (960 to 1400 mm/year) and is summer dominated, when potential evaporation is also highest (McVicar et al., 2014). Nonetheless, the region is still classified as being water limited inasmuch as potential evaporation (1400 to 1700 mm/year) exceeds rainfall in most months of the year. Rainfall is also highest along the margins of the subregion because this area is associated with higher elevation, whereas the deficit of rainfall, relative to potential evaporation, is greater throughout much of the lowland areas of the subregion. The Gloucester Basin underlies the Gloucester subregion and is characterised as a closed hydrogeological system. Thus, water entering the system must leave as either surface water or groundwater discharge (Dawes et al., 2018). Groundwater recharge is estimated to be up to 17% of rainfall under steady-state conditions and up to 28% of rainfall under transient conditions, with high values associated with alluvial aquifers (McVicar et al., 2014). This combination of rainfall deficit and surface water and groundwater recharge create the potential for GDEs to exist within the Gloucester subregion.

The geomorphology of the Gloucester subregion has been described in detail elsewhere (McVicar et al., 2014; Dawes et al., 2018), and only a brief summary is presented here as context (Figure 23). The Quaternary alluvial aquifers are developed close to the rivers. Soils in these alluvial deposits are dominated by Tenosols and are composed of clay layers and highly permeable sediments with high hydraulic conductivities (up to 500 m/day). The thickness of the alluvia varies from 9 to 15 m and the watertable is shallow and responsive to rainfall and flood events close to the river.

The Permian fractured rock and weathered zone is up to 150 m thick. It underlies the alluvial system and extends to the edges of the subregion. These shallow rock hydrogeological units are composed of interbedded sandstone, silt and claystone. Soils of the fractured rock and weathered zone tend to be dominated by Kurosols. Typically, these soils have a sharp, abrupt boundary between the upper coarser-textured A horizon and the finer-textured B horizon. This boundary may provide a pathway for subsurface lateral flows of water. Generally, hydraulic conductivities of these aquifers are low with a sluggish response to rainfall. However, these hydraulic conductivities are highly variable as a result of fracturing and fault zones within the formation.

The outcropping Alum Mountain Volcanics are generally considered to be impermeable but localised fractures may provide pathways for localised groundwater flow paths (McVicar et al., 2014). These flow paths may be expressed as springs along the margins of the basin, driven by localised circulation of meteoric water. 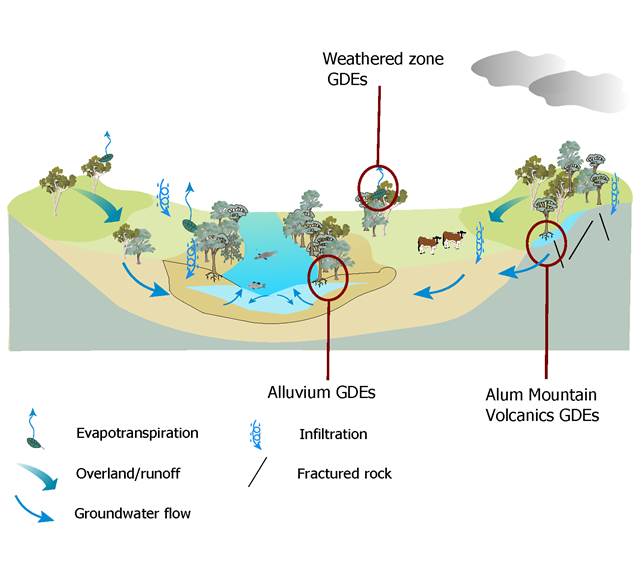 Specific studies of GDEs within the Gloucester subregion are limited. Existing mapping of GDEs is based on a multiple-lines-of-evidence approach that incorporated existing vegetation mapping, modelled groundwater levels and remote sensing (Kuginis et al., 2012). Modelled depths to groundwater (Summerell and Mitchell, 2011) for the subregion are generally shallow (within 16 m of the ground surface).

Of the five GDE landscape classes that were identified as likely to be groundwater dependent in the Gloucester subregion, qualitative models were developed for three landscape classes: ‘Forested wetlands’, ‘Wet sclerophyll forests’ and ‘Dry sclerophyll forests’. A qualitative model for rainforests was not developed owing to its small area within the subregion and lack of proximity to coal resource development. GDEs occur within each of the three hydrogeological units described above but they are predominantly associated the weathered/fractured rock zone and alluvial aquifers (Table 22). Few GDEs are present above the Alum Mountain Volcanics. The distribution of GDEs within the assessment extent (AE) of the Gloucester subregion is illustrated in Figure 6 of Section 2.7.2 . The structure and composition of the forested wetland landscape has been described in detail in the ‘Riverine’ landscape group (see Section 2.7.3.1).

Wet sclerophyll forests are tall, dense forests (30 to 60 m height) dominated by Eucalyptus trees. There are only small amounts of the ‘Wet sclerophyll forests’ landscape class within the AE for the Gloucester subregion and these are restricted to the weathered/fractured rock and Alum Mountain Volcanics land zones. Wet sclerophyll forests are divided into two subgroups (subformations) depending on whether their understorey is shrubby or grassy (NSW Office of Environment and Heritage, n.d. d). Both have a tall, straight-trunked eucalypt canopy and a mesophyllous understorey; however, the grassy subformation has a more-open form with fewer shrubs and small trees, and occurs in slightly drier habitats. Within the AE, wet sclerophyll forests are dominated by the Keith vegetation class ‘North Coast wet [shrubby subformation] sclerophyll forests’ (Dawes et al., 2018). Rainforests within the AE are primarily Keith vegetation class ‘Northern warm temperate rainforests’ (Keith, 2004). Note that the NSW-listed (Threatened Species Conservation Act 1995 (TSC Act)) ‘Lowland Rainforest in the NSW North Coast and Sydney Basin Bioregions’ and Commonwealth-listed (Environment Protection and Biodiversity Conservation Act 1999 (EPBC Act)) ‘Lowland Rainforests of Subtropical Australia’, are associated with both north coast wet sclerophyll forests and northern warm temperate rainforests.