The remaining design points represent hydrological scenarios that span the uncertainty in the values of the hydrological response variables in the relevant time period of hydrological history associated with the short-assessment (2013 to 2042) and long-assessment (2073 to 2102) periods.

Design point identifiers 3 through to 33 (as listed in Table 26) represent combinations of the two hydrological response variables (dmaxRef, EventsR2.0, Table 25), together with high and low values of Yref. The high and low values for Yref were calculated during the receptor impact modelling workshop following the experts’ response to the first design point, and then automatically included within the design for the elicitations at the subsequent design points.

Design points for Yref in the future (short- and long-assessment periods) are calculated during the receptor impact modelling elicitation workshop using elicited values for the receptor impact variable in the reference period. All other design points (with identifiers) are either default values or values determined by groundwater and surface water modelling. dmaxRef and EventsR2.0 are as in Table 25. na = not applicable, GDE = groundwater-dependent ecosystem

is an intercept term (a vector of ones),

is a binary indicator variable scored 1 for the case of an assessment in the short- or long-assessment year,

is a binary indicator variable scored 1 for the case of an assessment in the long-assessment year,

are the (continuous or integer) values of the two hydrological response variables (dmaxRef, EventsR2.0). Note that the modelling framework provides for more complex models, including the quadratic value of, and interactions between, the hydrological response variables but in this instance the simple linear model above was identified as the most parsimonious representation of the experts’ responses.

The (marginal) mean and 80% central credible intervals of the two hydrological response variable coefficients are summarised in the partial regression plot in Figure 31, while Table 27 summarises the same information for all six model coefficients. 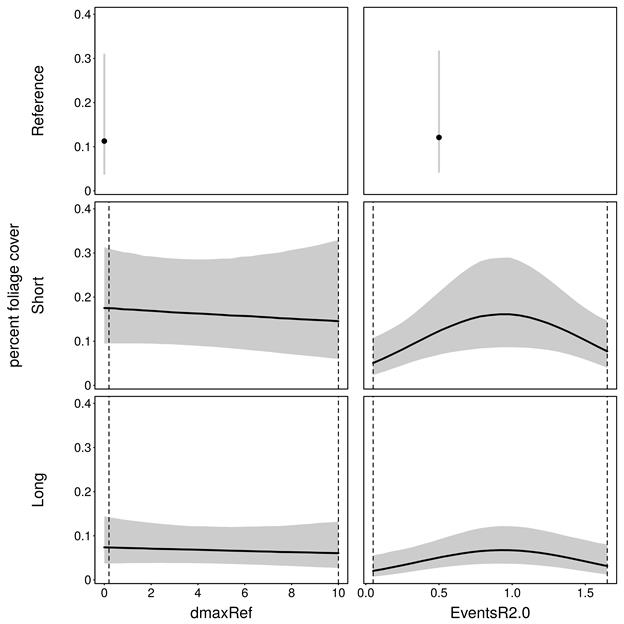 The model indicates that the experts’ opinion provides evidence for dmaxRef having a very small negative effect on average percent foliage cover. This suggests that percent foliage cover may decrease as groundwater drawdown increases due to coal resource development. The model predicts that (holding all other hydrological response variables constant at the mid-point of their elicitation range) the mean of the average percent foliage cover will drop from approximately 10% without any change in groundwater level, to about 7% if the levels decrease by 6 m relative to the reference level in 2012. There is, however, considerable uncertainty in these predictions, with an 80% chance that the foliage cover will lie somewhere between approximately 24% and less than 1% on the short-assessment period, and somewhere between roughly 17% and less than 1% in the long-assessment period, with a 6 m drop in groundwater level.

Table 27 Mean, 10th and 90th percentile of the coefficients of the receptor impact model for percent foliage cover in the ‘Floodplain, terrestrial GDE’ landscape group

The fitted model suggests that there is evidence in the experts’ responses for EventsR2.0 having a major quadratic effect on percent foliage cover. The 80% credible interval for this hydrological response variable’s coefficient lies wholly within the positive or negative parts of the real line (Table 27). If all other hydrological response variables are held at the midpoint of their elicitation range, the model suggests that the frequency of overbank flows will have a positive effect on average percent foliage cover unless that frequency becomes too high – the predicted increase in the average frequency of overbank flood events, from 0.05 in the 30 years preceding the reference year, to an average value of 0.9 over the future period, causes the average percent foliage cover to increase by almost 10%. However, large values of EventsR2.0 (above 1) will have a negative effect on percent foliage cover.

The summary statistics for the marginal distribution of the model coefficients (Table 27) for the two remaining model coefficients (future1 and long1) indicate that there is insufficient information in the expert-elicited data to determine the effect of the future coefficient, whereas the long coefficient is identified as having a negative effect.

Summary and download
2.7 Receptor impact modelling for the Galilee subregion