The only direct climate input into AWRA-R is daily precipitation, which is used to calculate precipitation directly onto the open water surfaces (the river channels and storages). Daily gridded precipitation data from the Bureau of Meteorology (Dataset 1) have been used in the calibration of AWRA-R. The gridded data were clipped and aggregated (spatially averaged) using reach subcatchment boundaries defined in the Namoi river system AWRA-R node-link network (Bioregional Assessment Programme, Dataset 4).

Town water supply diversions are not calibrated and are used as inputs in AWRA-R (Bioregional Assessment Programme, Dataset 5).

The AWRA-R model used for calibration comprises 45 nodes and their contributing areas, shown in Figure 11. These include the 32 gauging stations with stage and streamflow data used in assessing the model’s performance in calibration (NSW Office of Water, Dataset 3), and one dummy node located close to the Pian Creek offtake. Twenty-three of the gauging stations are non-headwater gauges: they include ten on the Namoi River, three on the Peel River, three on Pian Creek, two on the Manilla River, and one each in Coxs Creek, Mooki River, Narrabri Creek, Cockburn River and Gunidgera Creek (red triangles in Figure 11). The other calibration model nodes (black dots in Figure 11) comprise nine gauging stations on headwater streams, plus 12 model nodes (see Section 2.6.1.3.2), located on ungauged headwater streams. Daily streamflows at the 12 ungauged nodes are simulated by AWRA-L (Bioregional Assessment Programme, Dataset 2) and stages obtained from idealised cross-sections at each location (see companion product 2.1-2.2 for the Namoi subregion (Aryal et al., 2018); Bioregional Assessment Programme, Dataset 4). Eight model nodes, defining an additional eight ungauged reaches, located downstream of other model nodes, are not used in the calibration but are needed for the AWRA-R model simulations. 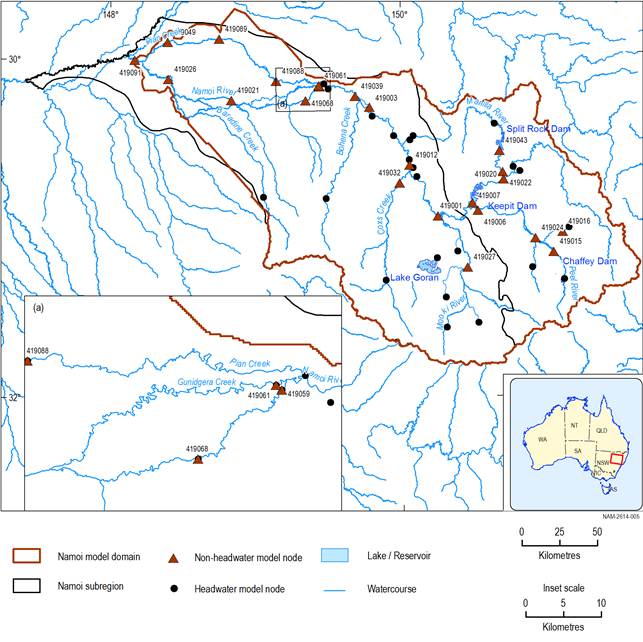 Daily irrigation diversions, dam storage volumes, daily dam releases and allocations were sourced from the Namoi and Peel Integrated Quantity-Quality Model (IQQM) (Bioregional Assessment Programme, Dataset 5) for the period 1 January 1981 to 30 June 2006. These were used to calibrate the AWRA-R irrigation and dam storage and releases modules.

The agreement of both high-streamflow and low-streamflow AWRA-R calibrations were assessed using the Nash–Sutcliffe efficiency (Ed) for daily streamflow (Ed(1.0)) and for daily streamflow transformed with a Box-Cox lambda value of 0.1 (Ed(0.1)) as well as both F1 and F2 values (see Section 2.6.1.4.1). The bias generally remains very low as each reach is individually calibrated and parameterised, as opposed to the regional calibration implemented for AWRA-L (see companion submethodology M06 (as listed in Table 1) for surface water modelling (Viney, 2016)).

The performance is reported for the 23 non-headwater gauges depicted as triangles in Figure 11 and where routing and reach water balance processes (including runoff from catchments between the two nodes, river water diversions, groundwater fluxes, overbank flow) take place. 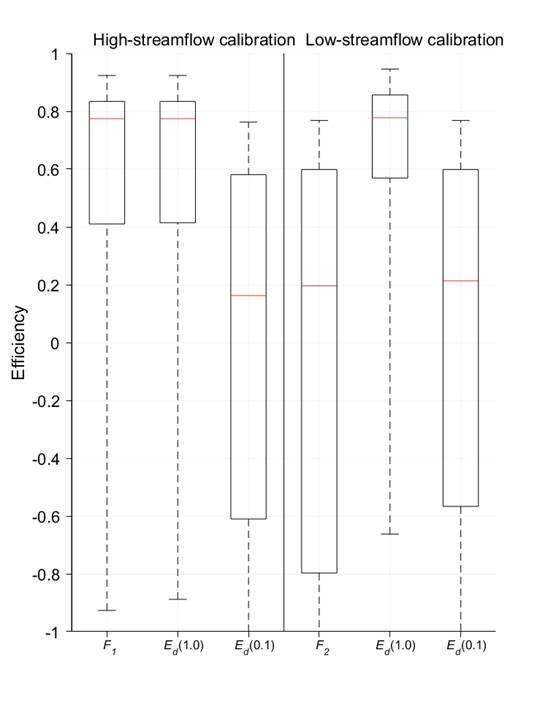 The impact of including eight additional ungauged nodes (where simulations are required) between gauges nodes (thus defining new reaches) marginally degrades agreement with observations compared to the original calibration of AWRA-R. For example, the median Ed(1.0) using the low-streamflow calibration with the additional gauges is 0.77 (range 0.53 to 0.86). The largest degradation is for gauge 419027 (Node 35 in the Mooki River), where Ed(1.0) decreases from 0.58 to 0.53, followed by gauge 419001 (Node 32 in the Namoi River) from 0.92 to 0.89. Changes in Ed(1.0) are marginal (<0.02) in the rest of the gauging stations. Again, median bias is less than 0.002. 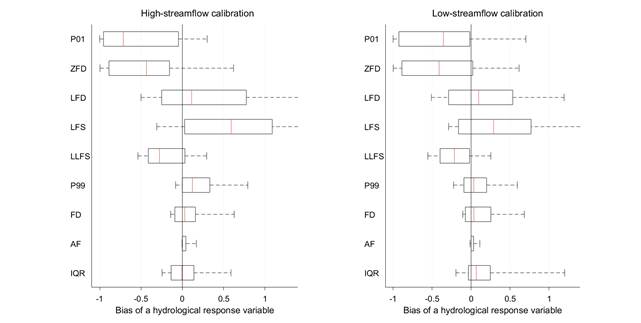 In each boxplot, the left, middle and right of the box are the 25th, 50th and 75th percentiles, and the left and right whiskers are the 10th and 90th percentiles for the 23 AWRA-R calibration reaches.

Shortened forms of hydrological response variables are defined in Table 8.

The irrigation module in AWRA-R was calibrated in 14 reaches along the Namoi River and three reaches along the Peel River. In the absence of observed irrigation diversion and allocation data, calibration of AWRA-R was performed against monthly IQQM-simulated diversions and allocation data for the period 1981 to 2006 (Bioregional Assessment Programme, Dataset 5) using AWRA-R simulated streamflow (Bioregional Assessment Programme, Dataset 4). Crop types and crop proportions used in the calibration were also obtained from the Namoi and Peel IQQM models and adjusted during calibration if needed.

Table 10 presents a summary of goodness-of-fit metrics used to evaluate the performance of calibration. Simulated and observed irrigation diversions were compared using (i) the coefficient of determination (r2), which indicates the agreement in temporal patterns, (ii) the monthly Nash–Sutcliffe efficiency (Em), which indicates the calibration accuracy, and (iii) bias (B), which indicates the overall tendency of the model towards overestimation or underestimation. Overall, AWRA-R calibrated diversions are satisfactory, with a median r2 of 0.4 and interquartile range from 0.25 to 0.47. The median Nash–Sutcliffe efficiency is 0.35 (interquartile range from 0.14 to 0.47). Diversions are under estimated in ten reaches, with three reaches with nodes 49, 3 and 45 having a negative bias of more than 20%, whereas overestimation occurs in the remaining reaches and only one reach (node 15) has a positive bias greater than 20%. The median bias is 10%.

Figure 14 shows examples of time series of observed and simulated diversions and mean monthly diversions for three reaches located on the Namoi River. 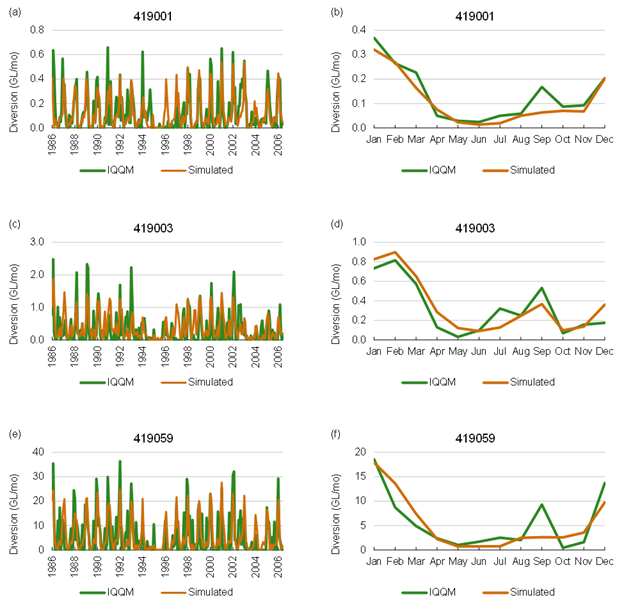 Generally, diversion peaks during the summer months (December to February) are under estimated, particularly prior to 1996 though less so in the remainder of the calibration period. Mean monthly diversions are simulated reasonably well, with most of the diversions occurring during the summer months and little or no diversion occurring during the winter months, when irrigation demand is low. IQQM diversions increase in many reaches during September, perhaps for irrigation of winter pasture during the last growing stage or for filling of on-farm storages before the start of the cotton irrigation season. Large peaks and increase in diversions in September were difficult to replicate in AWRA-R, even with the modifications (off-allocation diversion) implemented in the model (see Section 2.6.1.3) since these occurrences do not happen in most years.

Two systems are considered to estimate allocations in the Namoi subregion: (i) the Namoi River system, which includes Split Rock Dam and Keepit Dam and the downstream reaches that order water from these two dams; and (ii) the Peel River system, which includes Chaffey Dam and the downstream reaches that order water from this dam. Storage volumes for Split Rock Dam and Keepit Dam were calibrated as a single dam with combined storage against IQQM-simulated combined daily storage volumes (Bioregional Assessment Programme, Dataset 5), referred hereafter as Namoi Dams. Only releases from Keepit Dam were calibrated, with Split Rock transferring water to Keepit Dam when downstream demand is higher than the volume of water stored in Keepit. Transfers do not exceed 1500 ML/day. Storage volumes for Chaffey Dam releases were calibrated against IQQM-simulated daily storage volumes, releases and allocations (Bioregional Assessment Programme, Dataset 5), rather than against true observed data as the latter are too patchy and incomplete. The general calibration methodology and justification is described in companion submethodology M06 (as listed in Table 1) for surface water modelling (Viney, 2016). Allocations in the Namoi River and Peel River systems are determined by the volume of water held in the systems’ dams.

Goodness-of-fit metrics used to evaluate the performance on calibrated storage volumes and dam releases include the monthly Nash–Sutcliffe efficiency (Em), the coefficient of determination (r2) and the root-mean-square error (RMSE) to assess the overall accuracy.

For illustrative purposes, time series of monthly storage volumes are shown in Figure 15a and Figure 15b. Temporal patterns agree well with observations, with r2 values of 0.84 and 0.89 for Namoi Dams and Chaffey Dam, respectively. In contrast, modelled volumes are satisfactory for Namoi Dams (Em = 0.57) and good for Chaffey Dam (Em = 0.71). The RMSE is 113 GL and 5 GL for Namoi Dams and Chaffey Dam, respectively. It can be seen in Figure 15 that the Namoi AWRA-R dam model generally under estimates storage volumes between 1981 and 1993, but over estimates them during the dry period between 2003 and 2006.

Figure 16 summarises the monthly percentage error in storage volume for Namoi Dams and Chaffey Dam, computed as the percentage of the difference between the volumes simulated and observed divided by the simulated volume. The error is generally between –20% and +20%. It is likely that the modelled storages will generally be within a similar margin of error. 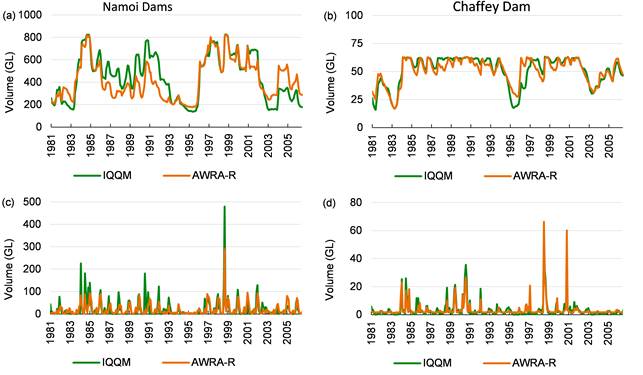 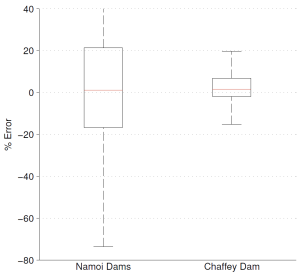 In each boxplot, the bottom, middle and top of the box are the 25th, 50th and 75th percentiles, and the bottom and top end of whiskers are the 10th and 90th percentiles.

The poor daily efficiencies for the simulated releases from Keepit Dam can be largely attributed to the under estimation of a number of peak releases, particularly during the period 1981 to 1993, but also a large spill release in September 1998. In the case of Chaffey Dam releases, the model conceptualisation captures well the downstream irrigation and town water supply demand.

Time series of observed and estimated allocations are shown in Figure 17. Simulated allocations for the Namoi River (Figure 17a) reflect the amount of storage in both modelled dams and the continuous accounting system, which allows users to have more than 100% of their entitled licence. As is the case for dam storage volumes in the Namoi River system, AWRA-R generally under estimates allocations between 1981 and 1993, but over estimates them during the dry period between 2003 and 2006. AWRA-R simulated allocations in the Peel River generally show higher allocations in years when water volumes in the dam are high (greater than 50 GL) and do not show the inter-annual variability present in IQQM. This is because IQQM computes allocations on 1 July (defined as the beginning of the water year in the Peel River, Green et al., 2011) and allocation increments may occur during the year if available resources increase. Conversely, AWRA-R computes an annual allocation on 31 August (preceding the beginning of the irrigation season), when about 33% of the annual average inflow has reached the dam. Overall, AWRA-R shows reasonable allocation patterns both in dry and wet periods.

Similar to AWRA-L calibrations, the parameter sets obtained for AWRA-R high-streamflow and low-streamflow calibration show large uncertainty in predicting the nine hydrological response variables. The outputs from simulations that use the 3000 parameter sets for both AWRA-L and AWRA-R are expected to provide suitable uncertainty bounds for predicting the hydrological changes due to additional coal resource development on the nine hydrological response variables in each model node in the Namoi subregion.

A wide range of dam operating conditions are represented in the model as a result of choosing a 26-year calibration period that includes significant dry and wet periods. This ensures that the model can be used in some of the extreme conditions imposed by modelling of additional coal resource development.

The irrigation demand routine that computes releases for irrigation performs reasonably well. This is highlighted in the reasonably good representation of monthly patterns (r2 greater than 0.7 in both Keepit Dam and Chaffey Dam) between simulated and IQQM-modelled releases. Releases are well simulated for Chaffey Dam (Em = 0.71). Some peak releases from Keepit Dam are not well matched by AWRA-R, resulting in poor overall agreement with an Em equal to 0.08.

AWRA-R simulated dam storage volumes, releases and allocations are reasonable and comparable to studies that simulated dam volumes and releases in multi-purpose reservoirs for scenario modelling (see Wu and Chen, 2012).

Overestimation of releases during the dry period between 2003 and 2006 can be partly explained by AWRA-L inflows to both dams, as AWRA-L tends to over estimate streamflow in the Namoi River during this drought period. Moreover, the calibration scheme uses one parameter per dam that linearly scales these inflows, thus it is difficult to solve this issue through calibration of the AWRA-R dam module only. Improvement of model performance can be achieved through better model conceptualisation and calibration strategies.

Finally, it should be noted that the hydrological modelling (in Section 2.6.1.6) presents the difference between the baseline and CRDP futures. As both futures use the same set of model parameters for simulation, any shortcomings in model performance will be common to both runs and would be largely eliminated on taking the difference.