In developing a future series of climate input, the objective is to choose the set of global climate model (GCM) seasonal scaling factors that give the median change in mean annual precipitation in the Namoi subregion. There are 15 available GCMs (as presented in Table 6) with seasonal scaling factors for each of the four seasons: summer (December–February), autumn (March–May), winter (June–August) and spring (September–November).

The scaling factors are applied to scale the daily precipitation in the climate input series that is generated for 2013 to 2102. The resulting annual precipitation time series for the Namoi subregion is shown in Figure 6. It depicts a 30-year cycle of 1983 to 2012 climate that is repeated a further three times but with increasingly trended climate change scalars.

In order to create the 90 years of climate inputs needed for the modelling, the last 30 years (1983-2012) of climate data were repeated 3 times with a climate change signal added on top of it. While this misses some of the extremes of historical variability, this will not affect the results since the timing of the coal resource developments would need to align exactly with an extreme year in order for its impacts to be felt. Also, as the difference between two futures each with exactly the same climate inputs is considered, any differences will largely cancel out. Finally, a 30 year repeating sequence was needed in order to assess ecological impacts since they are assessed over 30 year periods, and a climate sequence which differed between periods would make it impossible to disentangle the impacts of coal resource development from the impacts of climate variability.

Figure 6 shows that the decrease in precipitation from 2013 to 2102 is less than the typical inter-annual variability. Furthermore, it reduces average annual precipitation to levels that remain much higher than were typically encountered before the 1950s. Potential evaporation data from the 30‑year cycle of 1983 to 2012 was repeated without scaling to generate potential evaporation for 2013 to 2102. 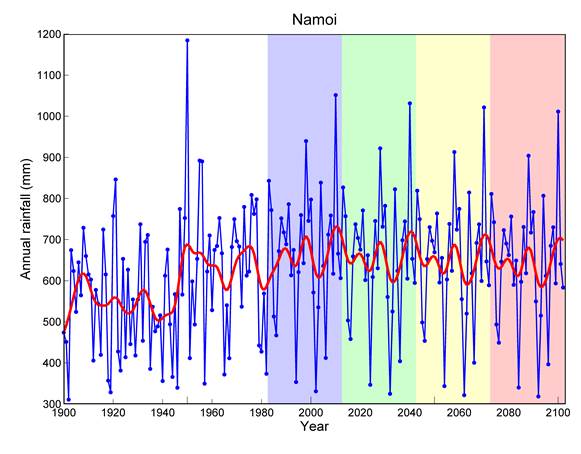