One important impact of coal mines is the interception (and on-site retention) of surface runoff that would otherwise flow to the stream network (see Section 2.3.5.3.3 in companion product 2.3 for the Namoi subregion (Herr et al., 2018)). It is important, therefore, to determine the areas where surface runoff will be intercepted. This area is termed the surface water footprint of the mine, and it can differ from the groundwater footprint. For the purposes of bioregional assessments (BAs), the surface water footprint covers the entire area disturbed by coal mine operations, including pits, road, spoil dumps, water storages and infrastructure. It may also include otherwise undisturbed parts of the landscape from which natural runoff is retained in reservoirs. The footprint does not include established rehabilitated areas from which surface runoff can enter the stream network. Nor does it include catchment areas upstream of drainage channels that divert water around a mine site and do not retain it.

Mine footprint areas change over the lifetime of a mine’s operations. As new parts of the lease are opened up for active use, the footprint increases. As mined parts of the lease are rehabilitated and their runoff returned to natural drainage, the footprint decreases although not necessarily to pre-mining condition. As well as the area of any final voids, the final mine footprint may also include the area covered by any infrastructure (e.g. dams, levee banks, roads) that is intended to remain on the site after final rehabilitation.

Time series of mine footprints for baseline and CRDP mines were compiled from spatial data supplied by mining companies and the NSW Department of Trade and Investment, or extracted by the Assessment team from environmental impact statements and related documents, Landsat TM and Google Earth imagery. The full detail of mine footprint time series is given in Section 2.1.6.12.4 of companion product 2.1-2.2 for the Namoi subregion (Aryal et al., 2018), therefore only an example of the plot is shown here. 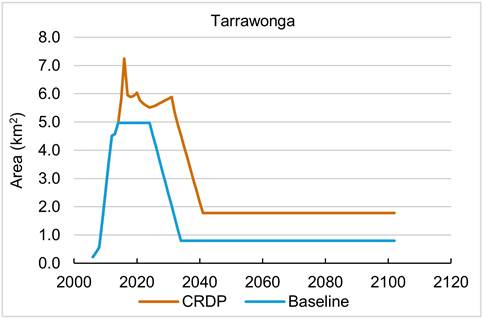 Impacts of mine footprints

The primary ways in which coal mining affects streamflow are through interception of direct runoff and groundwater-mediated changes in baseflow. For an open-cut mine, interception of runoff is assumed to occur in the area covered by the mine’s surface water footprint. Within this area, 100% of the streamflow that would have been generated in the absence of the mine is assumed to be retained on site and does not contribute to predicted streamflow.

For an underground mine, surface subsidence associated with the collapse of the longwall panels is expected to lead to increased ponding at the surface. This increased ponding is likely to result in a decrease in natural flow to the streams. A 5% reduction in runoff in areas covered by an underground mine footprint is conservatively (i.e. impact is likely to be smaller) assumed, which factors in regulatory requirements on mining companies to minimise the impacts from mine subsidence through such steps as appropriate longwall orientation and drainage management (see Section 2.1.6.12 in companion product 2.1-2.2 for the Namoi subregion (Aryal et al., 2018)).

The surface water footprints are not used to estimate the changes in baseflow. These are estimated by the groundwater model using the groundwater footprints, which are described in detail in companion product 2.6.2 for the Namoi subregion (Janardhanan et al., 2018). The groundwater model estimates monthly baseflow for each model node under the baseline and CRDP. The difference between CRDP and baseline simulations is taken as the monthly hydrological change in baseflow, and is then equally partitioned to obtain the daily changes.