Data needed for calibration of the Australian Water Resources Assessment (AWRA) landscape model (AWRA-L) include climate data and streamflow. The calibration period used for AWRA-L model development was from 1983 to 2012, which includes both wet and dry periods.

The landscape water balance model AWRA-L is run using gridded data of maximum temperature, minimum temperature, incoming solar radiation and precipitation. Daily grids (cell resolution of 0.05 x 0.05 degrees; ~5 x 5 km) of these variables are generated for the Australian continent by the Bureau of Meteorology (Dataset 1). Details of this dataset are provided in Section 2.1.1 of companion product 2.1-2.2 for the Hunter subregion (Herron et al., 2018).

Daily stage and streamflow data from 14 streamflow gauging stations with unregulated catchments located in and near the Hunter subregion were used to calibrate AWRA-L. These gauging stations and the catchments subtended by them are shown in Figure 8. Ten stations are located in the Hunter river basin and four in the Macquarie-Tuggerah lakes basin. Of the 14 stations, ten are located within the modelling domain (Section 2.6.1.3) and four are located very close by. Site details are summarised in Section 2.1.4 of companion product 2.1-2.2 for the Hunter subregion (Herron et al., 2018). Observed daily mean streamflow data for the above gauges for 1983 to 2012 were derived from NSW DPI water data supplied by the Bureau of Meteorology (Dataset 2).

Criteria for selecting the calibration catchments include that they: 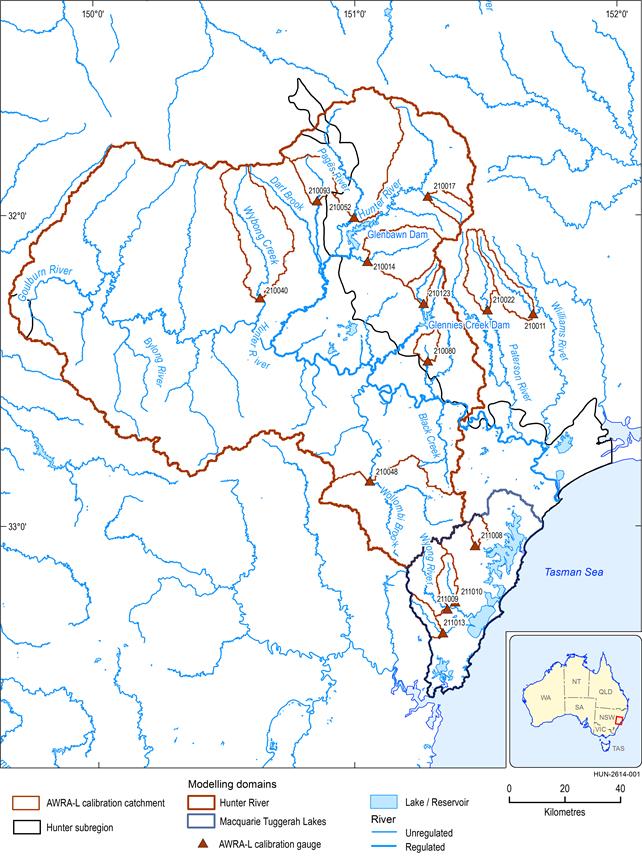 Figure 9 and Table 5 summarise results of the two model calibrations for the 14 calibration catchments in terms of the three performance metrics. The parameter values for the two calibrations are included in Bioregional Assessment Programme (Dataset 6). The high-streamflow calibration yields a reasonable Nash–Sutcliffe efficiency of daily streamflow, indicated by a median Ed(1.0) of 0.45 and interquartile range of 0.4 to 0.6. Overall model bias is low with a median bias of –0.03, but the interquartile range indicates variability across the 14 catchments with considerable overestimation in some catchments. The high-streamflow calibration yields a median F1 of 0.37, which is only 0.08 less than the median Ed(1.0), indicating overall low model bias. The Ed(1.0) value is negative (suggesting poor simulation) for one catchment: –0.16 at gauging station 211010 on the Wyong River, with a prediction bias of 0.68.

The performance of the high-streamflow calibration for the 14 catchments is not significantly related to catchment wetness, as it does not perform better or worse with a wetter climate. The Ed(0.1) values of the low-streamflow calibration are moderately correlated with catchment wetness (r2 = 0.51, p < 0.01), but the statistical significance of this correlation does not extend to F2. 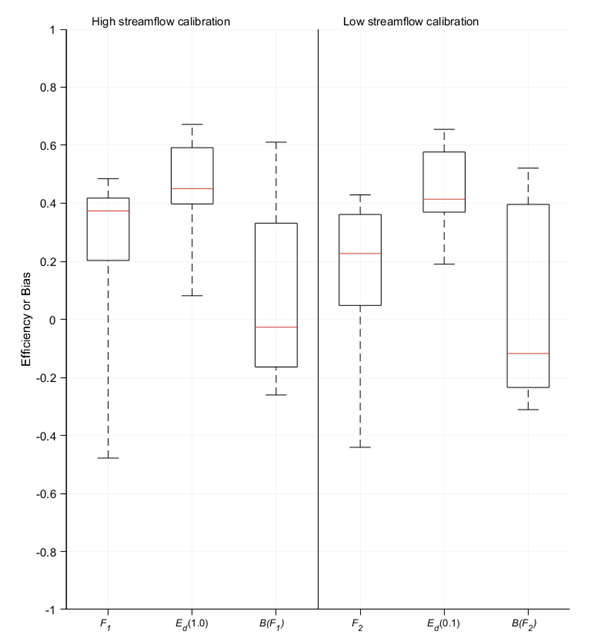 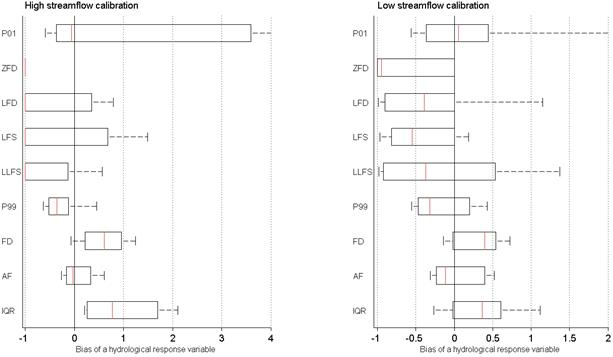 In each boxplot, the left, middle and right of the box are the 25th, 50th and 75th percentiles, and the left and right whiskers are the 10th and 90th percentiles.

Shortened forms of hydrological response variables are defined in Table 6.

It is noted that the parameter sets obtained from the regional model calibrations are not applied directly to the uncertainty analysis (Section 2.6.1.5). However, they are taken as reference values to evaluate performance of the best 10% of parameter sets (i.e. 300 model runs) selected for each hydrological response variable.

Results from the regional model calibrations (Table 5 and Figure 9) suggest that AWRA-L performs reasonably well in estimating high streamflow and low streamflow in the Hunter subregion.

It is noted that when the model is calibrated against observations from 14 streamflow gauges it does not generate a uniform model performance. Though the model performs well overall, it performs poorly in some catchments and does not estimate the suite of hydrological response variables equally effectively. For instance, the high-streamflow model calibration generates a poor model performance at gauge 211010. The model noticeably under estimates streamflow for gauges 211010 and 210048. For other gauges in the Hunter subregion, AWRA-L performs well in terms of model efficiency and bias.

As opposed to model calibration against observation at each individual catchment, a key characteristic of regional model calibration against observations from multiple catchments is that there is no noticeable degradation from model calibration to model prediction (Viney et al., 2014). For both the high- and low-streamflow calibrations, the biases at the majority of individual stream gauging sites are in the range –20% to +40%. Given the regionalisation methodology applied here, it is reasonable to assume that prediction biases in ungauged parts of the subregion will be similar. This provides confidence when applying AWRA-L to each model node where there are no streamflow observations.