A hazard analysis was conducted for the Hunter subregion based on the existing and proposed coal mines and their water management outlined in Section 2.3.4.1 and Section 2.3.4.2, respectively. The hazard analysis for the Hunter subregion was undertaken during a one-day workshop on 13 April 2015 with invited representatives from CSIRO, Geoscience Australia, Commonwealth Department of Energy and Environment and the NSW Department of Primary Industries Water (formerly NSW Office of Water), having expertise in coal resource development operations in the subregion or more generally and/or experience from earlier hazard workshops in other regions. The experts worked from a list of hazards that had been compiled during prior hazard workshops in other BA bioregions and subregions, which contributed to the efficiency of the process, ensured consistency with other subregions and assisted in confirming the comprehensiveness of the hazards identified for the Hunter subregion. Hazards associated specifically with coal seam gas development were not covered in the Hunter hazards workshop, as there are no proposals for CSG development in the CRDP for the Hunter subregion.

For the Hunter subregion, 271 hazards were identified and scored as per the IMEA (Ford et al., 2016). Activities were left unscored if they were considered not applicable to the subregion or were not expected to occur at the time of the Assessment. All decisions made during the workshop were recorded.

Results from the IMEA for the Hunter subregion suggest that the majority of activities associated with open-cut and underground mines could potentially impact the quality of surface water and groundwater through changes in total suspended solids, pollutants (e.g. metals, trace elements, sulfides, phosphorus), total dissolved solids (e.g. salt) and hydrocarbon loads. Some of these water quality impacts could result from the addition (e.g. spillage of contaminants) and/or release of pollutants (e.g. from erosion following vegetation removal; from leaching of mine waste) into the landscape, but many would simply arise from changes in the quantity, timing, pathways and interactions of surface water and groundwater flows. It is these hydrological changes that are the focus of modelling in the BAs. Changes in water quality are not modelled directly, but can potentially be inferred from the hydrological changes.

The hazard scores and hazard priority numbers for each hazard provide indicators of the key hazards in the Hunter subregion, as they reflect the severity and likelihood of a negative impact. Figure 21 lists the top 30 hazards in the Hunter subregion ranked by the mid-point of the hazard priority number range that resulted from the workshop, and then by the mid-point for the hazard score range. The same hazard can be associated with different mine components (e.g. open-cut and underground mines), life-cycle stages (development, production, closure) and/or different effects, where effects are specific hydrological characteristics of surface water and groundwater, including quality, quantity, timing, flow direction and connectivity. The hazards can be broadly grouped according to whether their main effect is to modify surface water drainage, cause leaching of contaminants from waste sites, change the flow paths between aquifers, cause dewatering of aquifers or change discharges to the river.

Excavation of topsoil and mine pits, subsidence above longwall mines, pit backfill and construction of on-site water storages and diversion channels modify surface water drainage and are in the top 30 hazards shown in Figure 21. Other activities with a lower hazard score that modify surface water drainage include removal of vegetation, construction of roads and other mine-site facilities and re-contouring the landscape during site rehabilitation.

Leaching occurs when water extracts certain materials from the medium through which it flows; it may lower the quality of the water and has implications for environmental and agricultural uses that depend on a certain quality of water. Leaching from waste rock dumps, run-of-mine (ROM) plants, coal stockpiles and tailings dams were identified in the highest ranked hazards in the Hunter subregion.

Creating new or enhancing existing connections between aquifers can cause aquifer depressurisation, changes in flow gradients and mixing of different quality waters. It can occur through increased fracturing caused by longwall coal extraction and associated subsidence, mine expansions into alluvial aquifers, installation of groundwater bores and creation of artificial recharge points (e.g. from open-cut mine pits). Five of the highest ranking hazards in the Hunter subregion relate to changes in subsurface flow paths. The full list of hazards (Bioregional Assessment Programme, Dataset 1) includes other hazards that potentially enhance links between aquifers as a result of drilling, coring, pit and shaft excavations and bore leakage.

Discharges of treated mine water to the river are hazards as the quality of the water and the timing of releases can differ from the quality and natural flow regime of the receiving water.

Details of the full hazard analysis are available at Bioregional Assessment Programme (Dataset 1). Not all the hazards identified in the IMEA are addressed in the BA for the Hunter subregion. Section 2.3.5.2.2 identifies the hazards that are in scope for the BA for the Hunter subregion and how they are handled, particularly for the purposes of hydrological modelling. 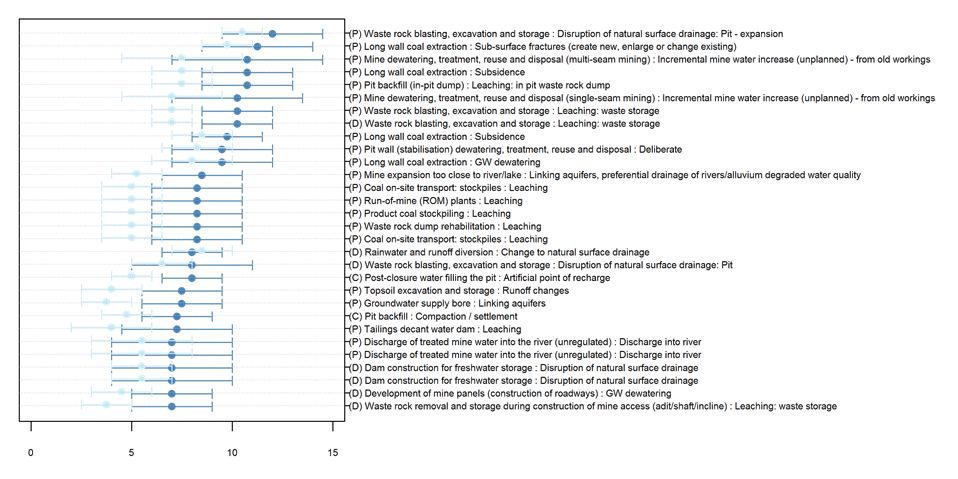 Figure 21 Highest ranked hazards (and their associated activities and impact modes) for open-cut and underground mines, ranked by midpoint of the hazard priority number

The x-axis shows the hazard priority number and hazard score for potential hazards. The intervals between the highest and lowest hazard priority number are shown in dark blue; the intervals for hazard score are shown in light blue. The same hazard may appear multiple times, as it may apply to different life-cycle stages (e.g. Waste rock blasting, excavation and storage), or to both open-cut and underground operations (e.g. Discharge of treated mine water into the river; Dam construction for freshwater storage) or be associated with different effects (e.g. Longwall coal extraction: Subsidence). Hazards are listed with the syntax [Life‑cycle stage][Activity]:[Impact mode], where life-cycle stages are indicated by (D) for development, (P) for production and (C) for closure.

Although a long list of hazards has been generated for open-cut and underground coal mining operations as part of BA, not all of the identified hazards are addressed through the BA process. From a BA perspective, the hazards of primary focus are those where impacts may extend beyond the development site and may accumulate with impacts from other mines. This is consistent with the regional focus of BA and is where a BA can add value beyond site-specific environmental impact statements (EIS). However, for every identified hazard, BAs need to be able to define whether it is within scope (i.e. likely to have or contribute to an off-site impact), whether its effects can be quantified using numerical models and/or whether other literature or narratives can be drawn upon to infer an impact. In this way, the BA can identify where science gaps may exist and provide guidance on how they might be overcome.

BAs are constrained by considering only impacts that can happen via water, and so hazards such as dust, fire or noise are deemed out of scope and are addressed by site-based risk management, unless there is a water-mediated pathway.

The BAs are also largely constrained to considering the impacts on water quantity, and not water quality. Site-based risk management procedures are in place to minimise off-site impacts on stream water quality. While stream salinity is not modelled in BAs, it is a significant issue in some subregions, including the Hunter subregion. A qualitative assessment of the potential effects of the modelled hydrological changes on stream salinity is included in the impact and risk analysis (companion product 3-4 for the Hunter subregion (as listed in Table 2)).

Hazards that pertain to the development site but have no off-site impacts are important to acknowledge but will typically be addressed by site-based risk management procedures.

For open-cut and underground coal mines, the following hazards were identified as being out of scope in the Hunter subregion, because they are deemed to be covered by site-based risk management and regulation and contained to the mine site:

Applying these filters to the 271 hazards resulted in 178 of the Hunter subregion hazards being deemed out of scope. This does not mean that they do not impact the water balance, but their impacts can generally be assumed to be contained to the mine site. Section 2.3.4.2 describes mine water management practices in the Hunter subregion, including the various regulatory instruments that define the obligations on mines in relation to minimising off-site impacts from coal resource development. In BAs, it is assumed that the existing regulatory measures are adequate and that mines are adopting best practice.

Of the 93 hazards that were deemed to be in scope because they potentially impact the hydrology off site, 46 can be addressed by the BA numerical modelling. For the remaining 47 hazards that are in scope, which include some that relate to water quality, it will only be possible within this BA to qualify their impacts through a more qualitative assessment. 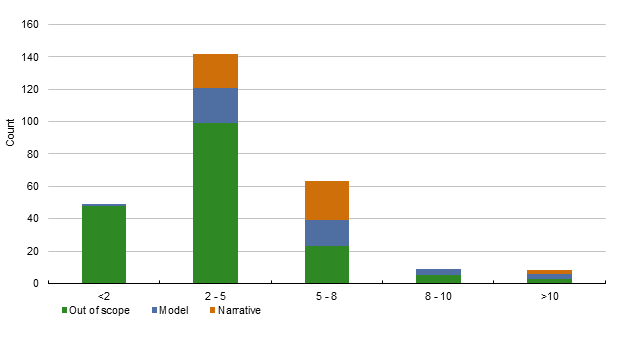 The models used to quantify the hydrological impacts of coal mining hazards in the BA do not necessarily model the hazards themselves. Some can be modelled directly. For example, mine dewatering can be represented in terms of a times series of water extracted from a groundwater store at some specified location. Other hazards, for example the subsidence that can result from longwall mining, are not modelled directly. Instead assumptions must be made about the likely impact of the hazard on hydrology, which means identifying what causal pathway group or causal pathway groups are affected by the hazardous activity. For the subsidence example, it is known that subsidence can lead to fracturing of the rock strata above (and/or around) the longwall panels and that this can enhance the hydrological connectivity between aquifers, leading to greater rates of water movement between them (e.g. Tammetta, 2015; Hua et al., 2008; Liu and Elsworth, 1997). The fracturing can be represented as a change in the hydraulic conductivities of the affected strata and the impact of this change on water levels and water fluxes can be quantified by the model. Because the level of fracturing is not known, uncertainty analyses are undertaken to define a range of possible outcomes from varying the hydraulic conductivities of the rock strata. To assess the impacts of the hazards arising from coal resource development on water-dependent assets, they need to be mapped to a causal pathway group that connects the hazard to other parts of the subregion. Section 2.3.4 and companion product 2.6.1 (surface water numerical modelling; Zhang et al., 2018) and companion product 2.6.2 (groundwater numerical modelling; Herron et al., 2018) for the Hunter subregion provide more detail of how the hydrologic impacts of coal mining operations are represented in the numerical modelling.