In this section, the key physical characteristics of the Hunter subregion that determine the nature of hydrological connections across the subregion are summarised, based on information reported in the companion product 1.1 for the Hunter subregion (McVicar et al., 2015). The conceptual model of Hunter system architecture and associated water flows and pathways developed provides the basis for assessing the impacts of coal mining developments on regional hydrology in this subregion. Although coal seam gas (CSG) development is not currently part of the coal resource development pathway (CRDP) for the Hunter subregion, the conceptual model of structural controls and hydrological connectivity is equally pertinent to any possible future CSG developments. Existing and potential water flows and pathways in the subregion are summarised conceptually, without detailed descriptions of any individual component. In Section 2.3.5, the coal mine activities identified in the hazard analysis for the Hunter subregion are grouped according to the flow pathways they affect, thereby establishing the causal pathways that potentially link changes in hydrology caused by coal mine activities to water-dependent assets.

The spatial limits of the Hunter subregion and the Hunter preliminary assessment extent (PAE) are the same and described in companion product 1.1 for the Hunter subregion (McVicar et al., 2015; see also Figure 6). The boundaries are the Hunter-Central Coast surface water catchment on the southern and western boundaries, a very short length of the geological Sydney Basin at Ulan in the south-west, a length of the geological Werrie Basin in the north-west corner, the Hunter-Mooki Thrust Fault along the northern boundary from Murrurundi to Maitland, and the natural coastline with the Tasman Sea to the east (see Figure 4 in companion product 1.1 for the Hunter subregion (McVicar et al., 2015)). The enclosed area is about 17,000 km2, and contains portions of the Western, Hunter and Newcastle coalfields (Figure 6). The Hunter subregion is not considered to have any groundwater connection with other areas where geological faults define its boundary, even in the north-east area where surface water flows originate outside the PAE. There may be a groundwater connection in the north-west at the boundary with the geological Gunnedah Basin, where shallow basement rocks are believed to divide the Sydney and Gunnedah basins, but there is a significant thickness of sedimentary rock which may allow a connection (see Section 1.1.3.4 in companion product 1.1 for the Hunter subregion (McVicar et al., 2015, p. 79)). Most of the southern boundary is defined by the surface water divide. Although regional-scale groundwater flows may occur across this boundary where head gradients and a suitable aquifer exist, they are considered to be small enough to not be significant in the water balance of the Hunter subregion. Suitable consideration, however, must be given during numerical modelling of this boundary to minimise any potential edge effects. 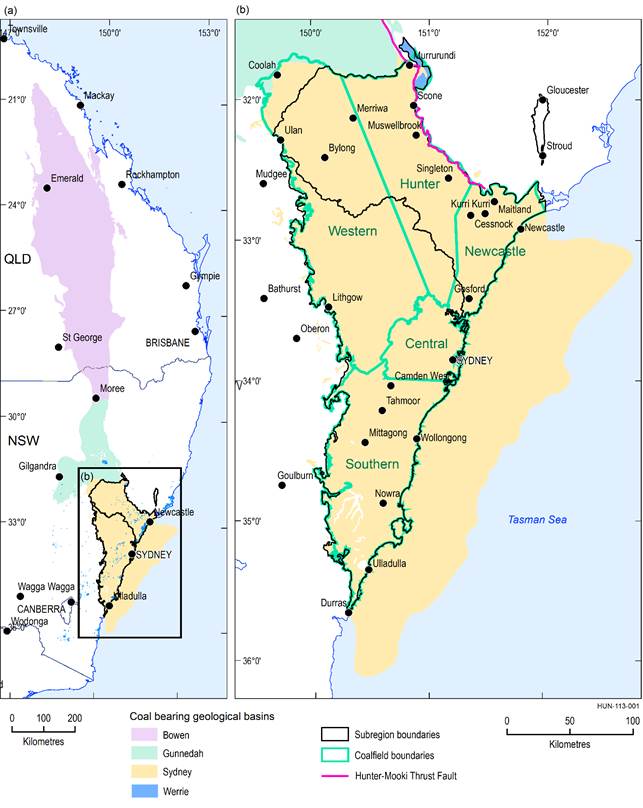 Figure 6 Location of (a) Sydney Basin and (b) Hunter subregion, showing main coalfields of the basin

Coal mining in the Hunter subregion first commenced in the 1790s from outcropping seams around Nobbys Head in Newcastle (NSW Mineral Council, 2016). Production in the Newcastle Coalfields increased due to the completion of a breakwater at Nobbys Head in 1846, which made transfer by ship much safer; the opening of railways from Sydney to Parramatta in 1855 and from Newcastle to Maitland in 1857, allowing rapid overland transport; and expansion into the Hunter Coalfields following the discovery of the Greta Coal Measures in the 1890s.

As of May 2015, there were 18 operating mines, 7 operating complexes containing multiple mining operations, and 6 mines in care and maintenance or recently closed in the Hunter subregion (see companion product 1.2 for the Hunter subregion (Hodgkinson et al., 2015)). Some mines have been operating for over 100 years, while others are less than a decade old. Hodgkinson et al. (2015) identified 42 proposals for coal resource developments that had commenced or were likely to commence after December 2012. This list included 27 proposals for extensions and modifications to existing mines, and 15 proposals for new operations. Feedback from mining companies following compilation of this preliminary list, including a review of approval and development commencement dates, plus review of availability of data to inform modelling have since been factored into defining what mining activities are represented in the baseline coal resource development (baseline) and CRDP for the Hunter subregion (detailed in Section 2.3.4). As of May 2015, there was no CSG production in the Hunter subregion, nor any proposals for future CSG development.

In general the groundwater flow paths follow the direction of the subregion’s topography from the uplands toward the central valley and then to the ocean. Mine operations may influence or interrupt flow paths within the geological layers from which they are physically removing coal and overburden, and potentially surrounding areas. Open-cut mining may affect streams and rivers, surface overland flows and shallow groundwater directly due to the area of active mine pits, dewatering of pits and construction of associated mine infrastructure. Underground mining may directly affect flows within the target coal seams and adjacent interburden layers, depending on connectivity. If longwall mining causes a collapse of the overlying material (subsidence) or localised uplift (upsidence), then the structure and architecture of the rock mass may change, thereby affecting its hydrogeological characteristics such as hydraulic conductivity and specific storage. These processes will affect flows and pathways up to and including surface flows.