Table 4 Landscape groups and landscape classes in the Hunter subregion

The water dependencies of landscape classes were classified as follows:

The water dependence of landscape classes was assessed by the BA teams in consultation with external experts but will be explored in greater depth during the development of qualitative models (see companion product 2.7 for the Hunter subregion (Hosack et al., 2018)).

The DPI Water methodology (Kuginis et al., 2016) defines groundwater-dependent ecosystems (GDEs) as ecosystems ‘that require access to groundwater to meet all or some of their water requirements so as to maintain their communities of plants and animals, ecological processes and ecosystem services’. Dependence on groundwater can range from obligate to partial or infrequent (Zencich et al., 2002) but excludes species that rely exclusively on soil water in the unsaturated zone. The classification of mapped GDEs is based on Sivertsen et al. (2011) which adopts Keith’s (2004) classification of vegetation communities into ‘formations’ and ‘classes’. ‘Vegetation formation’ is the top level of the hierarchy in Keith’s vegetation classification system. Formations represent broad groups distinguished primarily by structural and physiognomic features, with the addition of functional features such as salinity and drought tolerance in some cases (Keith, 2004).

Landscape classes within the ‘GDE’ landscape group were based on mapping of GDEs by DPI Water (NSW Office of Water, Dataset 3). The DPI Water’s methodology combines vegetation mapping, optical remote sensing and watertable level data (where available) with expert knowledge to compile maps of high probability, high ecological value and high priority GDEs. This data source was chosen ahead of alternatives such as the National atlas of groundwater dependent ecosystems (Bureau of Meteorology, Dataset 5) owing to its local detail and currency. Furthermore, the vegetation classification intrinsic to Dataset 3 (NSW Office of Water) allowed the classification of landscape classes to reflect the underlying function of the wetlands with which they are associated (Table 5). Of the 12 vegetation formations defined across NSW, eight have been identified in the Hunter PAE (Table 5), and all are identified as high probability GDEs. In addition, four springs (not listed in Table 5) were identified and included as a landscape class.

Springs are not described because they are not a vegetation formation.

The landscape classes within this landscape group are based on mapping of coastal lakes and estuaries (NSW DECCW, Dataset 4), and mapping of saline wetlands (mangroves and saltmarshes) and seagrasses (Victorian DPI, Dataset 6). For estuaries and lakes the Assessment team adopted the classification scheme used by the NSW Department of Environment and Heritage (Roper et al., 2011), which classifies estuaries and lakes based on dilution factors, tidal flushing times and geomorphology. The dilution factor is the ratio of the estuary volume to the volume of runoff from a large rainfall event, assumed at 10% of the total annual inflow. As an example, a factor of 15 would indicate that the estuary volume is 15 times larger than the runoff from a large rainfall event (Roper et al., 2011). Roper et al. (2011) provides details on the calculation of tidal flushing times. This classification scheme reflects the vulnerability of the water bodies to changes in the volume and quality of flows entering the estuarine systems. The names of the estuarine classes represent the dominant geomorphic type within each of three groups with different hydrologic conceptual models:

Although Keith (2004) grouped saltmarshes, mangroves and seagrasses together as a single vegetation formation, for BA purposes seagrasses are treated separately owing to their being fully submerged and completing their entire life cycle under water. Hence, two additional landscape classes have been identified within the ‘Coastal lakes and estuaries’ landscape group:

Native vegetation that was not classified as a high probability GDE and not placed in the ‘GDE’ landscape group was placed in this group. This vegetation was represented by the same vegetation formations and classes as the GDE vegetation.

All areas of the subregion that did not fall into one of the above categories were assigned to landscape classes based on the Australian Land Use and Management (ALUM) classification (for catchment-scale land use classification in Australia), Update 14 (ABARE-BRS, Dataset 8), was used.

The riverine aquatic habitats of the Hunter PAE range from fresh montane streams to lowland floodplains and associated wetlands. The rivers and streams provide in-channel habitat for fish such as gudgeon and hardyhead, breeding habitat for various amphibians including the Booroolong, stuttering and giant burrowing frogs, the green and gold bell frog and the giant barred frog, as well as a migration pathway between estuarine and freshwater environments for species of fish such as perch, bass and mullet. Platypus can be found in the major permanent river systems of NSW, including the Hunter subregion. 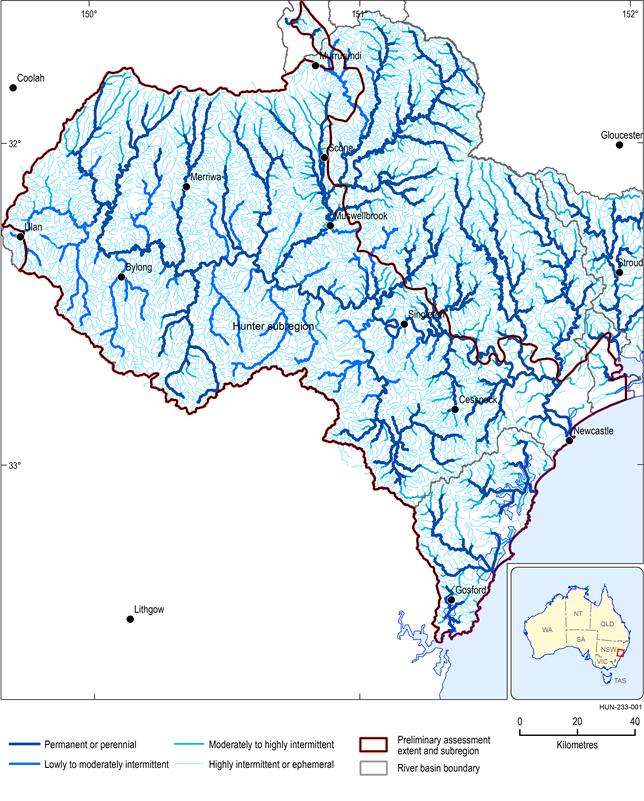 Rivers are classified using the method of DPI Water (Section 2.3.3.1.1), which is based on stream order and ecohydrology and have not been verified.

The total area of GDEs identified in the Hunter PAE is 358 km2, and is dominated by the ‘Forested wetland’ (150 km2) and ‘Dry sclerophyll forest’ (90 km2) landscape classes, with significant areas of ‘Rainforest’ and ‘Freshwater wetland’ landscape classes. The areas of each landscape class and associated Keith vegetation class within the PAE are given in Table 6, and their distribution is shown in Figure 12.

aKeith’s (2004) classification of vegetation communities into ‘formations’ and ‘classes’ 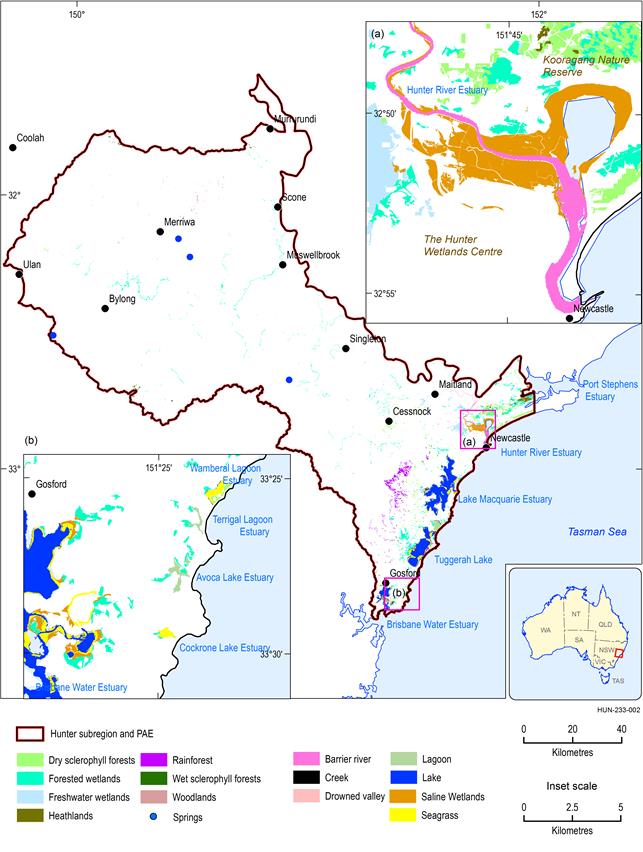 GDEs provide habitat for many of the species whose potential distributions form part of the water-dependent asset register (Bioregional Assessment Programme, Dataset 9). For example, animals such as koalas, birds of prey, honeyeaters and flying foxes may live, roost or nest in trees within GDEs. GDEs along riverbanks provide travel corridors and feeding sites for animals such as quolls, ground nesting locations for animals such as platypus, and breeding locations for some frogs. Some state and Commonwealth-listed plant species, such as the leafless tongue orchid, may be associated with GDE vegetation.

The hypothesised water dependencies of Keith’s vegetation formations and associated vegetation classes (Keith, 2004) in the PAE of the Hunter subregion are presented in Table 6. These are based on general information about the location of the classes within the landscape, their characteristics and associated species from Keith (2004), and state agency sources (OEH, 2015). Although some vegetation formations have been judged as uncertain to be water dependent for the purposes of the BA, they are nonetheless present in the DPI Water mapping of GDEs (NSW Office of Water, Dataset 3). This reflects the large uncertainties associated with the remote classification of both vegetation formations (Hunter, 2015) and groundwater dependency (Eamus et al., 2015) (discussed in Section 2.3.3.2). A recent study (Eco Logical Australia, 2016) concluded that, although there was not great accuracy in the mapping of individual plant community types (about 40% accuracy), there was much larger certainty (about 76% accuracy) in the identification of sites that were likely to be groundwater dependent. This uncertainty is a key reason why vegetation formation, rather than vegetation class, was adopted as the landscape class for the Hunter BA. GDEs in landscape classes that are potentially impacted by development will have more detailed conceptual models developed as part of receptor impact modelling (see companion product 2.7 for the Hunter subregion (Hosack et al., 2018)). Where a landscape class contains Keith’s vegetation classes that are likely to be heterogeneous with regard to their water requirements (e.g. ‘Forested wetland’ and ‘Freshwater wetland’ landscape classes), it may be necessary to develop multiple receptor impact models for that landscape class within a region. 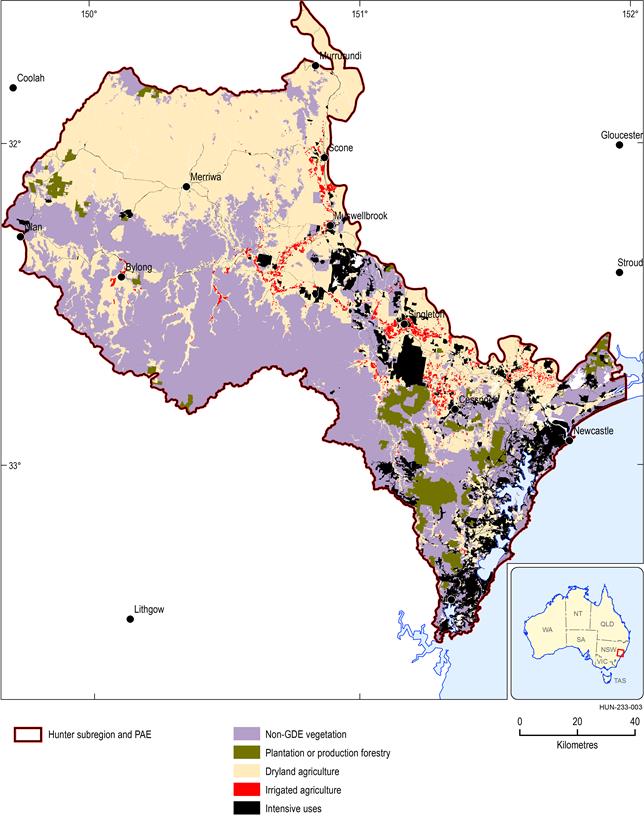