Adani Mining is the proponent of the Carmichael Coal Mine and Rail Project in the north-eastern Galilee Basin, about 160 km north-west of the town of Clermont (Figure 12). The Carmichael Project proposes the development of a large scale thermal coal mine on mining lease application (MLA) 70441, which incorporates EPC 1690 (Adani Mining) and some parts of neighbouring EPC 1080 (Waratah Coal). The site is also covered by MLA 70505 (Carmichael East) and MLA 70506 (Carmichael North). Adani Mining has received consent from Waratah to lodge MLA 70441 as it includes parts of Waratah’s EPC 1080 (Adani Mining, 2013). Considerable mining-related infrastructure and coal processing and handling facilities are proposed for MLA 70441 and in nearby areas off-site. Capital investment for the life of operation is estimated at $16 billion, with the integrated coal and rail project expected to have an operational life of 60 years. A 90 year mine life was originally planned in the EIS documentation (Adani Mining, 2012), but was subsequently revised to 60 years in the Supplementary EIS (Adani Mining, 2013).

The total coal resource at Carmichael is estimated at 10.15 Gt (reported in accordance with the JORC Code). This includes 1.16 Gt of measured resource, 3.24 Gt of indicated resource and 5.74 Gt of inferred resource (Adani Mining, 2012). The black coal deposits at Carmichael are of Late Permian age, similar to the other advanced coal projects in the central-eastern Galilee Basin such as Alpha and China First. Previous exploration and feasibility studies have shown that the coal deposit underlies almost the entire area of EPC 1690 (Adani Mining, 2013).

There are five main coal seams in the project area. These have a mean thickness of 28 m and a maximum cumulative thickness of 50 m. Consistent with the widely accepted coal nomenclature for the Galilee Basin; the coal seams are designated as A-B, C, D, E and F (Table 9).

The A-B and C seams are interpreted to belong to the Bandanna Formation, whereas the lower three seams are in the Colinlea Sandstone. The current coal resource estimate does not include the C seam due to high ash content and heterogeneous thickness (inferior raw coal). The coal seams are known to sub-crop along the eastern boundary of the project area, and dip gently to the west at relatively low angles (2 to 6°) (Adani Mining, 2012). There are four main easterly trending geological faults that cross-cut the coal seams and off-set their continuity, with vertical displacement of between 20 and 40 m.

As reported for other Galilee Basin coal deposits, overburden at Carmichael includes poorly consolidated to unconsolidated Cenozoic sediments such as sand, gravel and clay (Table 9). These have a mean thickness of 74 m, but may be over 100 m thick in some places. In the west of the project area the coal seams are overlain by up to 400 m of weathered Triassic rocks, comprising the Dunda beds and the predominantly fine-grained Rewan Group (Adani Mining, 2012). Interburden between coal seams includes some sections of predominantly sandstone and siltstone, with other sections consisting mostly of finer-grained rocks such as mudstone. These are also of variable thickness, with some being less than ten m thick (e.g. the strata separating seams E and F), and others over 60 m thick (between the B and C seams).

Key components of the proposed Carmichael mine and its on-site infrastructure include: 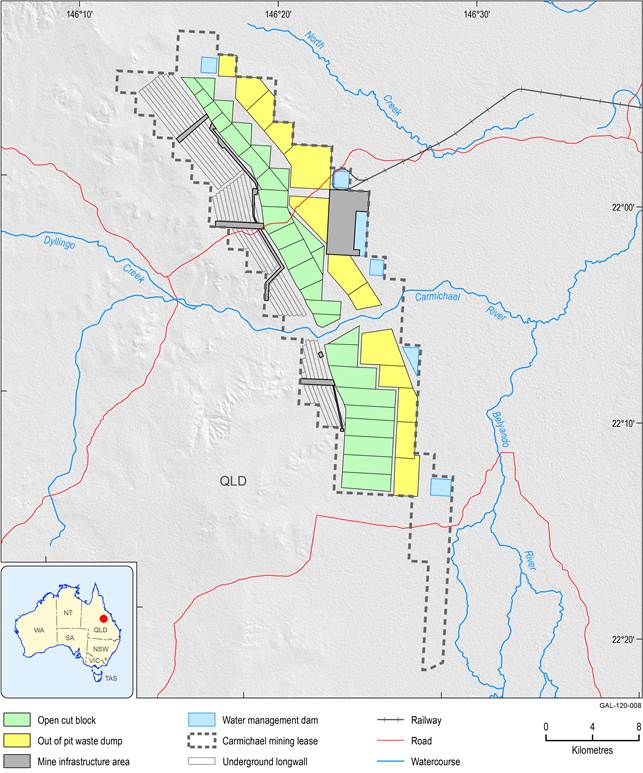 Adani Mining (2013) indicated that the overall mine concept and infrastructure components are unlikely to change from the plans outlined in the Supplementary EIS, although further refinement of planned mining operations may occur based on updated geological exploration and geotechnical data.

Off-site infrastructure that may be developed to support the mining operations includes quarry pits, a workers accommodation village and associated facilities, a heavy industrial area and a new airport with a 3000 metre long airstrip. Adani Mining proposes for the bulk of the 3500-strong operational workforce to access the site via a fly-in/fly-out roster (Adani Mining, 2012). Water supply infrastructure is also required for extraction, storage and delivery of up to 12.5 GL/year.

The large scale of the mining operations at Carmichael requires a significant investment in equipment and plant. Open-cut operations propose to mainly use conventional truck and shovel equipment for stripping overburden and extracting coal, probably in combination with bucket wheel excavators, draglines and continuous haulage systems (Adani Mining, 2013, although exact mining details were not yet finalised in the Supplementary EIS). The three underground longwall mines will require standard equipment such as hydraulic shields for roof support, coal shearers to cut the coal from the working face, and conveyor systems to transport coal to the surface ROM pads (Adani Mining, 2013).

The west to east flowing Carmichael River transects the central part of the proposed mining area. A 51 hectare exclusion zone has been proposed to provide a protected corridor around the Carmichael River (Figure 15). This corridor has a minimum width of 500 m either side of the centre of the river to minimise impacts to the river and associated riparian zone.

All coal mined at Carmichael is expected to be transported via privately owned railway connecting to existing rail infrastructure near Moranbah in the Bowen Basin (the Goonyella and Newlands rail system) (Adani Mining, 2012). Coal will then be shipped to international markets (mainly India) via the coal export terminal at either Abbott Point or Hay Point. The development of this 189 km long greenfield rail link forms part of the integrated Carmichael development project. The rail system may consist of sections with dual gauge and narrow gauge tracks, as well as reception and departure lines at each end, and an 18.7 km long balloon loop loading line (Queensland Coordinator-General, 2014).

In May 2014 the Carmichael Project obtained conditional approval to proceed (Queensland Coordinator-General, 2014). In late July 2014, environmental approval was also received from the Australian Government under the EPBC Act. As of August 2014, the remaining stages in the overall pre-mining approval process are granting of the current mining lease applications that cover the proposed Carmichael development, and issuing of an environmental authority (EA) to conduct mining related activities. If the ML and EA are granted, construction of the first open-cut pit is planned to commence in 2015 (based on the schedules in Adani Mining, 2012), with the first underground workings starting around 2018 or 2019. Mining operations will initially begin in the northern sector of the lease, with the southern part to be developed in later stages. If construction goes to schedule, first coal production is expected from open-cut pits in 2016, and from longwall operations in about 2020.