As of 28 July 2014 there are 14 mining leases (MLs) under application in the Galilee subregion that relate to proposed coal mine developments (Figure 10 and Table 5). Mining leases for coal have yet to be granted for these applications. In addition, there are six mineral development licences (MDLs) for coal projects, and a further three MDLs that are under application (Table 6). Refer to Appendix A2 of this report for information about these different types of mining development tenements.

Source data: Queensland DNRM (2014b). Project names are as listed in the source dataset.

Source data: Queensland DNRM (2014c). Project names are mostly as listed in the source dataset. Mineral development licences in this table that do not have a granted date signify that the tenement is an application

The 14 mining lease applications cover the six most-advanced coal mining development projects proposed for the Galilee Basin (in terms of the statutory government approvals process); these being the Alpha, Kevin’s Corner, China First, Carmichael, South Galilee, and China Stone coal projects. In some cases, there are multiple mining lease applications that cover the same project area, for example China Stone and Carmichael (Table 5). Additional to these six advanced projects, mining lease applications also exist for two less advanced (that is, not yet at environmental impact statement stage) development projects, namely North Alpha and Clyde Park. Further details about each of these proposed developments are in Section 1.2.3.1 of this report. 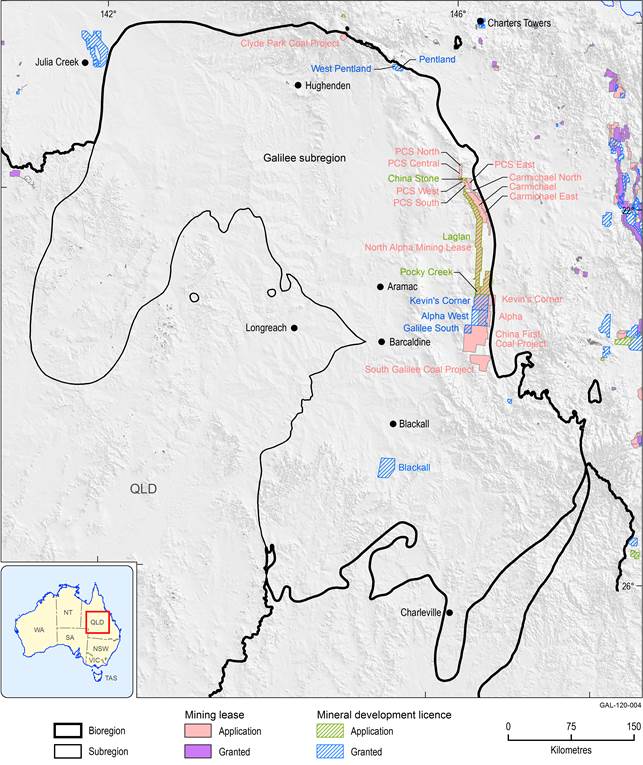 Source data: Queensland DNRM (2014b and 2014c). Only mining leases and mineral development licences related to coal projects in the Galilee subregion are labelled.