The main geological formations targeted for coal seam gas (CSG) resources in the Galilee Basin are the Aramac Coal Measures in the Joe Joe Group, and the Betts Creek beds (and their equivalent Late Permian coal-bearing strata). The Aramac Coal Measures are too deeply buried throughout the Galilee Basin to be economically viable for mining, although they have been a secondary CSG target for several companies in the western and central parts of the basin. Throughout most of the Galilee Basin, the coals of the Betts Creek beds are regarded as the main CSG play, and these are being actively targeted by the main CSG explorers in the basin, such as AGL, Comet Ridge Limited (Comet Ridge) and Blue Energy Limited (Blue Energy) (see Section 1.2.3.2 for further details). The younger Cretaceous coals of the overlying Eromanga Basin are relatively thermally immature and are unlikely to have produced sufficient gas to enable economic CSG production. Only a few exploration wells have targeted these younger coals for CSG, and results have also generally been poor.

Previous studies of CSG resources and coal and gas properties in the Galilee Basin mostly relate to particular exploration tenements and wells. For example, Blue Energy’s well completion report for the Ballyneety 1 exploration well mentions that coals intersected in their tenement typically have moderate gas content (2.5 to 3.5 m3/t), low thermal maturity (Rv, max of 0.45 to 0.60%) and are predominantly composed of inertinite, which makes for poor cleat systems (Blue Energy, 2010). Drilling in EPP 744, by Comet Ridge, has shown that the Aramac Coal Measures do not occur in their tenement (known as the Gunn Project, see Section 1.2.3.4 for further details), and that CSG potential is restricted to the Betts Creek beds. Results from seven exploration wells in the Gunn Project area by Comet Ridge have shown that there are five coal seams in the Betts Creek beds. These occur at depths of 700 to 1000 m below surface, and contain CSG with a mean gas content of over 4 m3/t, and cumulative coal thickness varying from 16 to 24 m (Comet Ridge, 2013).

At a regional scale, I’Anson (2013) investigated coal and CSG properties from the main coal-bearing units in the Galilee Basin using data from more than 30 exploration wells drilled across the basin. This study focused on the basin’s main depositional centre of the Koburra Trough. Significant findings from this work included:

In contrast to the nearby Bowen and Surat basins, coal seams in the Galilee Basin are commonly interbedded or in direct hydraulic contact with highly porous and permeable sandstone aquifers (APLNG, 2011). Consequently, given the typically low to very low gas saturation levels of the coals, this may create problems for de‐pressurising coal seams for CSG extraction. Significant volumes of co-produced water would need to be produced to reach the critical desorption point for successful gas production, which could prove very difficult with sandstone aquifers commonly present throughout the Galilee and overlying Eromanga basins (further discussed in Section 1.2.3.2).

There is currently no publicly available regional estimate of the total CSG resource (gas-in-place) in the Galilee Basin. Published resource estimates are available for only three petroleum exploration tenements, and these are limited to contingent (2C and 3C) and prospective resources. There are currently no proved, probable or possible gas reserves known in the basin (Table 4). There are two CSG pilot appraisal studies currently in the Galilee Basin, namely the AGL-operated Glenaras Project in the south-west of EPP 529, and Comet Ridge’s Gunn Project about 100 km north-west of Aramac township in EPP 744. Publically available information provided by these companies indicates that they are seeking to continue their appraisal studies and eventually aim to develop estimates for commercial gas reserves, although final investment decisions on commercial production are not likely to occur for at least eight to ten years. A brief summary of these CSG operations is in Section 1.2.3.2.

AGL is the operator of EPP 529, but the tenement is held in 50:50 joint venture partnership with Galilee Energy Ltd. Where prospective resources have been published as a range, the mid-point is quoted here. Resource numbers are current as of May 2014. 2C and 3C refer to different classes of contingent resources as defined in the Petroleum Resources Management System of the Society of Petroleum Engineers (SPE, 2011). 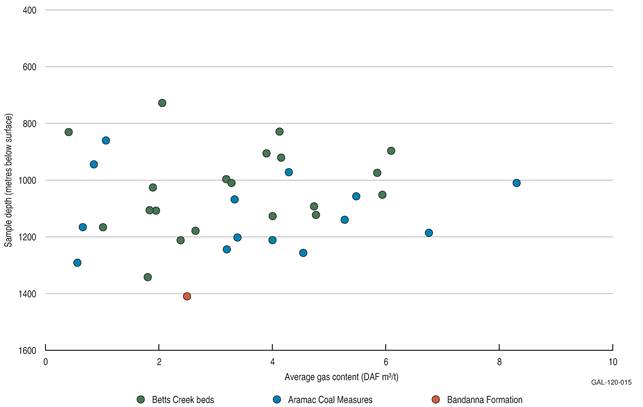 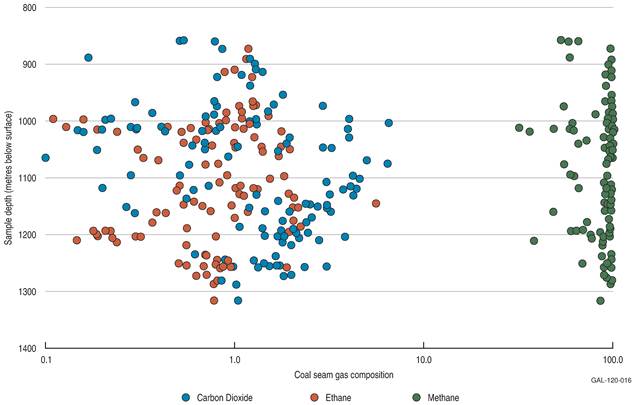 Figure 7 Gas compositions from coal seams in the Galilee Basin