The geological Galilee Basin contains extensive world-class resources of predominantly high-volatile, low sulfur thermal coal. Development plans are well-advanced for six major black coal deposits on the eastern margin of the basin (Figure 12). Because of their large size these operations are projected to achieve significant economies of scale.

Although the Galilee Basin is currently a major focus of coal exploration and possible future development, most of this activity has taken place post-2008. In 2003, Mutton reviewed the physical and chemical properties of all known Queensland coal deposits. As part of this review only three coal deposits were described from the Galilee Basin, these being Alpha, Kevin’s Corner and Pentland (all first identified in the 1970s). This indicates that, a little over ten years ago, the overall size of the coal resources in the Galilee Basin was poorly understood. The total resource inventory quoted by Mutton (2003) for the Galilee Basin amounted to only 1678 Mt of raw coal available for open-cut mining (measured and indicated resources), and 530 Mt of raw coal available for underground mining.

In a little over a decade the estimated coal resources of the Galilee Basin (i.e. the 23,248 Mt of identified resources quoted in GA and BREE, 2014) have grown over ten times the tonnage quoted by Mutton (2003). This large increase in relatively short time reflects the boom in greenfield exploration that has occurred since the mid-2000s (closely aligned to significant increases in global coal prices), and the successful delineation of at least seven thermal coal deposits containing in excess of one billion tonnes of identified resources (reported in accordance with the industry standard guidelines of the Joint Ore Reserves Committee (JORC) Code). 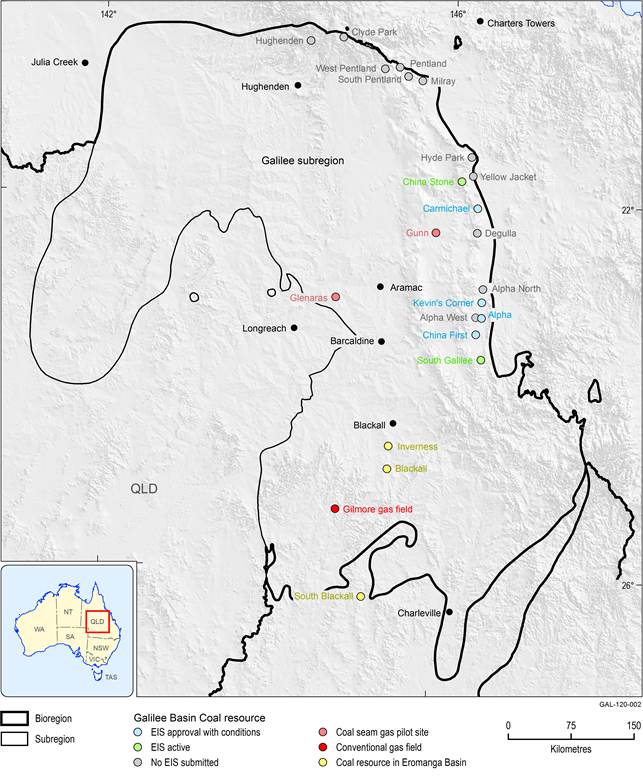 The six most advanced coal development projects in the Galilee Basin are covered by various mineral development licences (MDLs) and mining lease applications (MLAs) (as outlined in Section 1.2.2, with details of tenement types in Appendix A2 of this report). Environmental impact statements (EIS) have been submitted and assessed for most of these projects (Figure 12). The EIS assessment was required as these proposed coal developments have the potential to cause significant environmental impacts. Thus, they have been declared ‘coordinated projects’ by the Queensland Coordinator-General under the State Development and Public Works Organisation Act 1971. Other Queensland legislative acts that may relate to assessing environmental impacts of development projects include the Environmental Protection Act 1994, and the Sustainable Planning Act 2009. Further information about the process of assessing coordinated projects in Queensland is available from Queensland Government (DSDIP, 2014a).

There are four coal mining development projects in the Galilee subregion that have recently been granted approval by the Queensland Government (subject to various conditions) to begin the initial stages of mining construction and development prior to starting commercial operations. Listed in order of approval (Figure 12), these coal projects are:

There are two other proposed coal development projects that are currently within the EIS approvals system and pending assessment outcomes:

In addition to the statutory requirements under Queensland legislation, these proposed developments have also been declared ‘controlled actions’ under relevant Australian Government law (specifically, the Environment Protection and Biodiversity Conservation Act 1999). This requires that they are also assessed for their potential impacts on Matters of National Environmental Significance (MNES). As of August 2014, the Alpha, Kevin’s Corner, China First and Carmichael coal projects have all been approved with conditions by the Australian Government under the EPBC Act. However, to permit mine construction operations to commence, these developments also require the granting of a mining lease from the Queensland Government (under the Mineral Resources Act 1989), as well as the award of an environmental authority (EA) under the Queensland Environmental Protection Act 1994. The EA is required as the coal mining and associated activities are regarded as environmentally relevant activities (ERA). The EA administering authority for resource-related activities in Queensland is the Department of Environmental and Heritage Protection (EHP).

A summary of the proposed developments and resource characteristics at each of the operations at EIS stage (as listed above) is included within this section, mostly obtained from relevant information provided by development companies in their EIS and related documentation. This provides a general overview of the developments that are likely to be carried out at each of these sites in the future (at least according to current plans).

As well as the six most-advanced coal mining developments, there are another two MLAs for coal projects in the Galilee Basin that are not yet at EIS stage:

The timing of any future EIS assessment of these two projects is currently unknown. However, brief summaries are also presented in this section for these two resource projects to provide an indication of the style of development that may occur in the future. These details have mostly been taken from publically available information from company websites, and various reports and statements presented to the Australian Securities Exchange (ASX).

There are several coal projects in the Galilee Basin covered by MDLs (but not yet MLAs), and these can be considered as potential sites for future coal mining development. However, these are at a less-advanced state than MLA projects, and decisions to proceed with each of these will depend upon the outcomes of further resource assessment and preliminary mine feasibility studies. The potential coal project developments in the Galilee Basin with MDLs, but which are not yet at the stage of submitting a MLAs are:

Brief summaries of the coal resources and potential developments for the relevant MDL projects, as well as other potential developments at the Degulla and Hyde Park coal projects (though not yet at MDL or MLA stage), are also provided in this report section. The details of these potential developments are mostly taken from publically available information from company websites, and reports and statements presented to the ASX. The likelihood and timing of possible EIS submission is not currently known for these projects.

The information provided in this report section about each proposed mining or CSG development focuses mainly on the details relating to their coal and gas resources and relevant features of planned mining development and associated infrastructure. The details of water management and monitoring associated with these developments, such as mine dewatering volumes or expected annual water usage rates, are not included within this report. Instead, this information is reported in later products for the Galilee subregion.