The biggest river in this subregion is the Hunter River, a major river in NSW, Australia. It rises in the Liverpool Range, and flows generally south and then east before flowing into Lake Glenbawn. It then flows south-west and then east-south-east before reaching its mouth on the Tasman Sea at Newcastle. The Hunter River is joined by ten tributaries upstream of Lake Glenbawn, and a further 31 tributaries downstream of the reservoir. Its eight main tributaries include the Moonan Brook, Stewarts Brook, Paterson River, Williams River, Pages River, Pages Creek, Goulburn River, and Wollombi Brook (Table 12).

The Hunter River splits into two main channels from east of Hexham, separated by the Ramsar-protected Kooragang Wetlands. The southern arm of the river also creates Hexham Island, while the northern creates Smiths Island and flows into Fullerton Cove. The two channels converge at Walsh Point, reaching confluence with Throsby Creek adjacent to the Newcastle central business district, before reaching the river mouth. 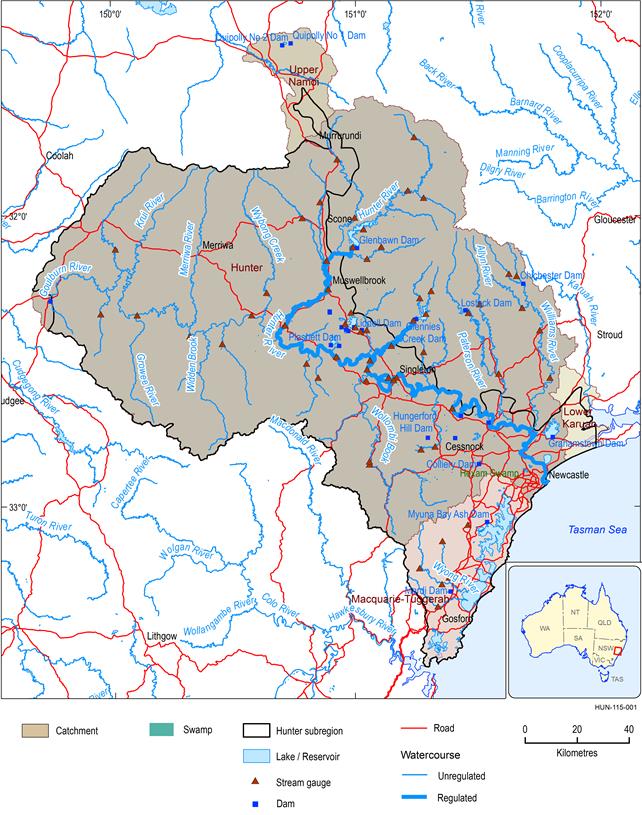 The Hunter River descends 1397 m over its 468 km course from the high upper reaches, through the Hunter Valley, and out to sea. The total Hunter river basin area is 21,437 km2.

The Macquarie Tuggerah basin is located in the NSW Central Coast and Lake Macquarie area directly south of the Hunter basin (Figure 38). The Macquarie Tuggerah basin covers an area of 1836 km2 and is bordered by a series of east flowing streams in the north, and the Sugarloaf Ranges to the north-west. The Hawkesbury River acts as a boundary to the south, while the Hunter Range separates this basin from the Mangrove Creek basin.

The Hunter subregion contains a part of the lower Karuah river basin. The Karuah River originates from the south-eastern slopes of the Gloucester Tops section of the Great Dividing Range, south‑west of Gloucester, flows generally south-east and south, and discharges into Port Stephens near the township of Karuah. The total length of the Karuah River is about 100 km. It has two major tributaries within the Hunter subregion: Chilcotts Creek with a length of 6.8 km and Colly Creek with a length of 6.4 km.

aDirection means the left or right side along the main rivers from upstream to downstream.

The Hunter River has a long history of floods, the most notable being the February 1955 event. This flood was one of the most devastating natural disasters in Australia’s history. Worst hit was the inland city of Maitland, and as a consequence, the 1955 Hunter Valley flood is often known as ‘The Maitland Flood’. A total of 25 lives were claimed during a week of flooding that washed away 58 homes and damaged 103 beyond repair. More than 5000 homes were flooded and about 15,000 people were evacuated. More details for this flood are available from the Bureau of Meteorology website (Bureau of Meteorology, 2014). Another major flood event in the Hunter Valley occurred on 8 and 9 June 2007 when an intense low pressure system caused devastating storms to hit the city of Newcastle and the Central Coast and led to major flooding throughout the Lower Hunter Region.